There is a strong stench coming up from the cobblestones in Boston. And the more we dig, the worse it gets. (Start with first article.)

Yet, there is no 'FiOS TV' Fiber-to-the-Home (FTTH) agreement or details about the Boston deployment to 100% of the City, which was reported by the media; no maps, no time line--just a bait and switch and a lot of questions.

America's East Coast is affected: And it concerns everyone, residences and businesses alike, on the entire US East Coast, from Massachusetts to Virginia, as all fiber to the home deployments have been halted, (except to complete existing contracts)--and this is a road map of what to expect from Verizon. 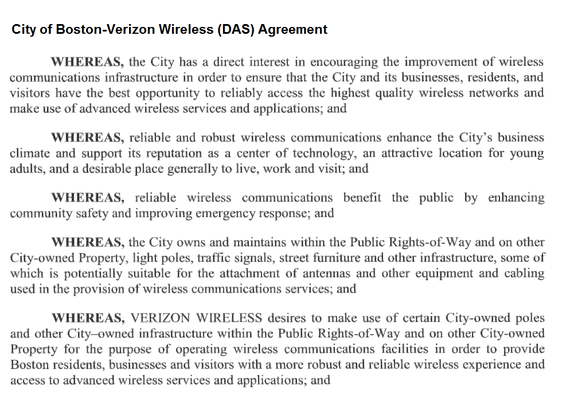 Boston has waited years to get FiOS TV--a fiber optic wire to the home for broadband, internet and cable TV service.

"Verizon is finally ready to offer its high-speed fiber optic service to Boston -- a victory for city officials who have long sought meaningful competition for high-speed Internet and TV service in a city dominated by Comcast Corp.

"Mayor Martin J. Walsh announced the Verizon move Tuesday, a $300 million investment that will roll out in select neighborhoods beginning this summer but will take six years to cover the whole city. Boston has also agreed to speed up permitting for the infrastructure upgrade and to begin the process of licensing Verizon as a cable TV provider."

But, the City of Boston residents and businesses were deceived. This was never the plan. The Plan is to substitute wireless for the wires, including fiber optic wires for FiOS TV. Just read the press coverage. There's no mention that this is a 'wireless first' project.

"Verizon to build $300M fiber network in Boston"
"Verizon will bring its fiber-optic FiOS network to Boston over the next six years, city and company officials announced..."

And the City had been asking Verizon to bring fiber optic FiOS to the City for years.

"Boston promised to roll out the red carpet for Verizon if the company would expand its high speed FiOS service across the city, but the telecom giant at a hearing yesterday told the City Council no thanks.
"Administration officials and city councilors told Verizon representatives they would reduce regulations, help with permits and make the city an extraordinarily welcoming place to build a network.

"The city is willing to do whatever we need to do to facilitate private broadband investment in a way that is beneficial to all of Boston," said Jascha Franklin-Hodge, chief information officer for the city."

This is not about wired broadband--This is a bait and switch.

First, Fierce Telecom's coverage tells us that the Verizon plan for Boston was driven by wireless.

"Verizon's (NYSE: VZ) recent announcement to bring FiOS to Boston -- one of the cities that was initially left out of its initial build target -- was driven by a desire to fulfill its wireless LTE and business service desires, its top financial executive said.

"Shammo added that 'at this point in time we're focused on Boston only because wireless was going to densify Boston for LTE and that's what made sense'."

Motley Fool details that this was about cost savings--including cutting jobs.

"Moving the wireline segment to wireless

"Verizon's biggest potential for margin and cash flow improvements comes from migrating some of its wireline operations to its wireless business. To that end, Verizon is working on developing and deploying 5G technology to bring fixed wireless broadband to people's homes using its wireless network."

"We are incurring the capital to install those small cells today to deliver LTE. I will come over the top and just install 5G into that cell, and then the only thing that happens beyond that is what happens in the home that I would be doing with FiOS today, but at a much reduced cost because there's no labor to dig up your front lawn, lay in fiber. I'll be able to stick something, whether it's on your window or somewhere, to receive that line of sight signal, deliver it to a router, and then you have WiFi in the home.

"As a result, Verizon's home Internet service would require much less labor and no extra capital expenses. Additionally, Verizon would be able to expand its home internet service nationwide, wherever it's built out a dense LTE network, producing more scale for the business. The spectrum required for 5G -- 28 gigahertz or 39 gigahertz, depending on the standard the FCC sets -- is widely available today, so that expense won't break the bank, either.

"While the Verizon strike affected earnings a bit more than initially expected, there doesn't appear to be much potential for prolonged impacts from renegotiations with the unions. Furthermore, Verizon has a plan to reduce the amount of labor it needs for its in-home broadband service that should produce better margins and scale for the business in the long run."

But this is what should start the investigations. On March 31, Verizon Wireless - that's right, wireless -- signed a detailed agreement with Boston to do wireless, and to do DAS, distributed antenna systems; small wireless cells that are attached to a fiber optic wire.

And there are maps at the back of this agreement of historical preservation areas and specific needs of these areas - and they are in Boston proper. And while these maps could be part of the City of Boston's wireless agreements, the pictures and diagrams of the poles all have Verizon's logo attached to them - so we believe that the wireless build out is the entire city--not only in the limited areas that are supposed to have fiber to the home.

This listing of just Boston streets and alleys goes on for over 9 pages. 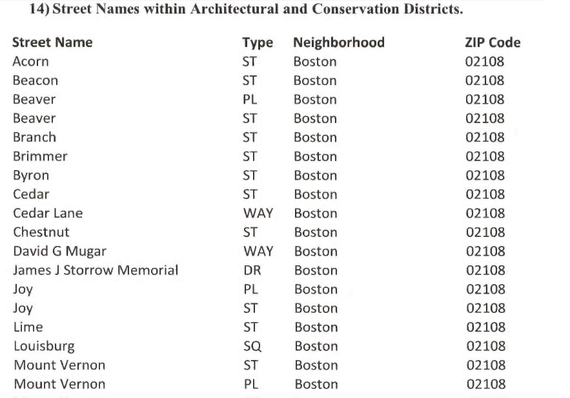 I go searching and find that the City of Boston and Verizon have an official signed "Cooperation Agreement"; it's only 4 pages: the wireless agreement is 71 pages.

Even though 'wireless' is in every paragraph, this Cooperation Agreement states that the construction is NOT being done by Verizon Wireless (or for Verizon Wireless) - but as part of the state utility's wireline budget and its rights of way, and it classified as "Title II" and part of the existing state utility. And this paragraph says it is 'removing the copper' but never mentions wireless will be using these networks...

And the final kicker: The next few paragraphs never mention doing 100% of the entire city. It does not say Verizon is going to even do other areas. It says--- the City and Verizon will 'examine' the needs--of other areas. It DOES NOT say that they will 'complete' even the areas listed above, like Roxbury; there are no penalties or fines, or discussions or maps. 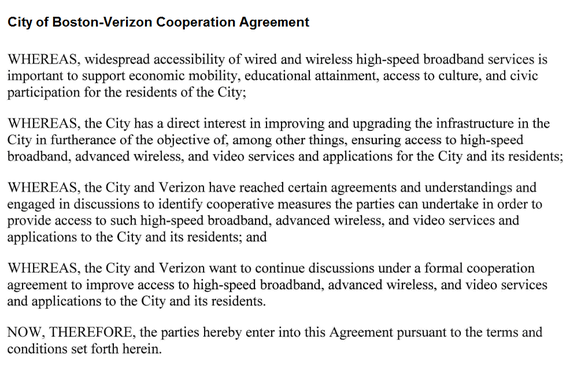 This is unbelievable. When I started this investigation I hadn't known there was a signed contract for wireless and a piece of toilet paper for an agreement which never mentioned fiber to-the-home or FiOS TV or has anything about an actual deployment past the beginning areas. Instead, it reveals a plan for wireless that, it appears, is going to be using the state utility--Title II, fiber optic wired networks- and paid for by wireline phone customers.

This means that the entire state has also been deceived as, instead of properly upgrading and maintaining the copper networks, they are playing games to divert the construction budgets to a separate company - Verizon Wireless - so that they can make more money and get rid of 'labor'.

And this means that the entire East Coast has been conned as well as Verizon has no plans to do any other city - and if they do, they will use this wireless con--even when the wireline customers are footing the bills.

As we detailed in New York, Verizon received multiple rate increases to do 'massive deployment of fiber optics'--(which was diverted to fund wireless). Doesn't this violate both state and federal laws? Verizon Wireless is not the wireline franchise holder, yet it is controlling the wireline fiber build out for wireless.

Everyone who lives in the Verizon 'footprint' - not to mention the entire United States east coast, from Massachusetts to Virginia, should start demanding investigations of the wireless cross-subsidies.

And Boston? Did the Mayor and staff actually sign this agreement knowing it had nothing to do with bringing a fiber to the home service to customers?

There is absolutely NO evidence to show that based on this bathroom paper-based 4 page cooperation agreement that the areas mentioned will be completed, or that any other part of the City of Boston will ever get FiOS wired services.

And if you want to start the investigation - Start with this Notice. This unreadable strip is the actual size and look when I clicked on the link. Are they kidding?