Welcome to ETP's "Media Winners — Iowa Edition," our spinoff of our highly successful franchise in which our stories are, quite literally, ripped from the headlines. We figured there might be something to say about the circus going on in the Hawkeye State, even if it is happening under ten feet of snow. (The first winner, incidentally, is Iowa, which has probably never had so much PR in all the combined elections before this.) But otherwise, let's see who's done well by the media this primary season! 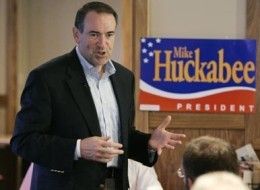 Mike Huckabee: Further to my blog post yesterday, whether by accident or by design, Mike Huckabee has done well by the media this season. Romney may be outspending him 20 to 1, but you certainly can't tell by the play he gets in the national media. It's a new phenomenon, certainly — when he won the Iowa straw poll this past summer, the story was really about how Mitt Romney and Rudy Giiuliani didn't actually participate — but ever since his sudden "surge" (fave media word!) he's been all over. Of course, there has been the question of closer scrutiny, but there Huckabee has gotten lucky, too, because when he hit, EVERYTHING bubbled up to the surface — resulting in a bundling of issues into a larger "concerns about Huckabee" story rather than, say, across-the-board media pickup of the Wayne Dumond story (which was about much more than his push for the release of a convicted rapist, it was about the cheap politics behind that push and the fact that he claimed that 'no one could have known' Dumond would rape again on the outside, even though Huckabee had multiple impact statements from victims attesting to the danger). Did that story get picked up even a fraction as much as Hillary's drivers license comment? Or even as much as the floating cross? Never mind his penchant for accepting gifts (including a Wendy's lifetime discount). And if he'd had to pay for the airtime that floating cross commercial got, he'd probably have ended up outspending Romney 20 to 1. Oh, and as for high-profile celeb endorsers, it pretty much goes Bill Clinton, Oprah and Chuck Norris. Not a bad push along the road from Hope to Higher Office. (R.S.)

The Politico: Launched in January of this year, the Politico was initially billed as a joint online and print venture that would cover national politics. While those in the DC area may now be accustomed to scooping up the old-school print edition, it is the website that is packing the biggest punch. Despite being accused by some of evincing GOP sympathies (Drudge reportedly linked to the site 45 times in the first 58 days) in less than twelve months Politico has established itself as the place to go for comprehensive campaign coverage (not to mention co-hosting a debate earlier this year at the Reagan Libary).

Ben Smith, who blogs the Democratic campaign, made his bones here, breaking out as a go-to source of coverage and links (after a bumpy start in March wrongly reporting that John Edwards was going to quit his campaign after his wife's cancer returned), but coming back with a number of big stories including GQ's shelving of a negative Hillary story in order to get Bill on the cover, as well as Giuliani's questionable billing of city agencies whilst beginning extramarital relationship with future wife Judith Nathan; which arguably contributed to Giuliani's recent drop in the polls. More than that, though, Politico has a strong team (Mike Allen, Jim Vandehei, Roger Simon, the Crypt etc.) plus lots of Drudge-love (which might contribute to their sometime-tabloid feel and tendency for overhype). Whether Politico will be able to sustain its influence beyond this historically hot election year remains to be seen. But they certainly timed their entrance onto the scene perfectly, and as we all know, timing is everything. (G.M.)

NBC's First Read: It doesn't tell you how influential it is, nor does it brag about it's all-powerful readership, it just comes unobtrusively into your inbox each morning, and now evening, to efficiently distill the day's political news. Unlike so many blogs and websites nowadays, the point is not to trick you into clicking through a link to the jump or the next page or whatnot — links are provided but not pushed or teased. In fact, though First Read does exist as a blog, it is First Read the old-school email newsletter that has quietly become a prop for daily political perusal (Mickey Kaus thinks so, too). It's short, efficient and smart as hell — look no further than today's pithy game-framing missive (the George Mason analogy? Right on.) This may sound dorky, but the dispatches from Chuck Todd, Mark Murray, and Domenico Montanaro feel like they're coming from your dad, or your wonkish, pleasantry-eschewing friend — all you need to know without any time-wasting flourishes. It's hard to know what they "win" of course since the email isn't ad-supported and the blog is NOT very prominently linked from either the MSNBC homepage or the Nightly News page (hi, teeny ten-point type!), but the hearts of the political set have got to count for something. It's just so gosh-darned useful.

Irony: Since Mark Halperin split for Time, the Note has become way more readable, becoming more brisk and efficient, with more graphics and links and less endless pages of dense type. Which probably gives it wider appeal, even if it does lose some of Halperin's influence (but don't forget that the Note was first, which helped). Meanwhile, Halperin's The Page is now the complete aesthetic opposite of his Note: cleanly-organized see-it-in-one-sweep on a single, with great use of color and image and type to pack in info while not hurting your head to look at (cf. Drudge) (Swampland, too, has led the way online). And of course there's the HuffPost politics page but that's just a given. (R.S.) 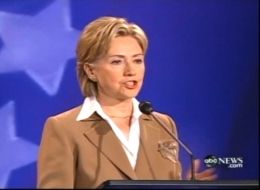 Hillary Clinton: There's no such thing as bad publicity — or so the saying goes. If that's true then Hillary Clinton's done well indeed by the media, as frontrunner, target and half of America's most fascinating couple (leaving Brangelina aside). The "as long as they spell your name right" argument helps especially since lately her coverage has been about how bad her media coverage has been. Hillary's struggle with her "likability" factor is no secret — what other candidate (or president, or vice president, for that matter) has inspired such a slick, well-produced take-down as the "Hillary 1984" video mashup from earlier this year (nobody has a crush on Hillary, it would seem). And then there's the infamous "cackle"...and as for the driver's license gaffe, has any other candidate been leapt on so hard by the media for so little? Still — all of it has kept her name in the headlines and her mug at the top of the talk shows. Why? Because people LOVE talking, writing, debating and analyzing Hillary. In a weird way, that's almost like love. (GM/RS)

The Atlantic: If George Steinbrenner were given the chance to create the blogging version of a Yankee all-star line-up it might resemble something along the lines of what the Atlantic has managed to pull together over the last twelve months. To begin with they lured heavy-hitter Andrew Sullivan away from Time (no word on what the paycheck for that move might have looked like). Then they followed up by netting Matthew Ygelsias and Ross Douthat, two of the leading voices of the next generation of punditry. Shortly thereafter, Megan McCardle of Assymmetrical Information appeared on the masthead along with long-time Atlantic contributors James Fallows and Clive Crook. Rounding out the line-up is Marc Ambinder, who is currently providing some of the best campaign coverage around. All in all, a one stop shop for all your intellectual blogging needs, (though the woes of Jamie Lynn have managed to infiltrate a number of conversations, so perhaps there's hope for Perez yet). Considering the Atlantic recently celebrated its 150 year anniversary, its powerhouse online presence is certainly managing to put a new spin on the saying everything old is new again. (GM) 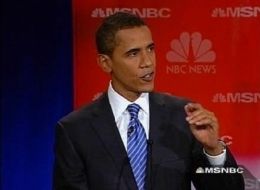 Barack Obama: I almost don't need to write this. Can anyone argue that Barack Obama was not a giant media winner this year? There was the rock-star meme, first of all. (Huckabee surge, Hillary cackle, Obama the rock star — these all took on a life of their own). Yes, the great expectations led to all sorts of "can he live up to the hype?" articles — but notice that they were framed more as a question rather than the assertion that no, he wasn't living up to the hype...even when he wasn't. (Please, anyone who says that he didn't look damned unhappy to be at some of those debates wasn't watching the same TV.) (MoDo excepted, of course.) There was also the "is he black enough?" storyline which was just dorky, and the cop-out version of actually getting into thornier issues of race. Howard Kurtz made the point that Hillary's gender was way more of an issue than Obama's race, which is no doubt true (think of the furor about Joe Biden's "clean and articulate" comment, and then think of some of the cracks that are made about Hillary and pass without a blink). Even the response to the Clinton-camp comment mentioning cocaine — that backlashed onto her as a smear, but really it was a non-issue since he'd disclosed it in print ages ago in the context of what he'd overcome (never mind that it was Joe Trippi who REALLY jumped on the word "cocaine" — yet no one seemed to finger him for pushing that meme. Kurtz thinks the media tip-toed around the race elephant in the room, and I tend to agree — while everyone fretted that the use of the word "cocaine" was deliberate to invoke an association to associations with inner-city crack dens, no one actually examined whether it would, or why.

That, of course, is just race — hardly Obama's defining characteristic (which is itself a reason for the above, but this is already too long). What was his defining charactistic was his personification of hope and newness and revolution, and no one wanted to deviate much from that script (and Oprah-palooza played into that nicely, obviously). I'm not saying that it wasn't warranted — it was Oprah, for God's sake — but I am saying that framing Obama's support in terms of a wave of hope and optimism and Clinton's support as inevitability imposed by a suffocating dynasty might have been just a tad unbalanced. It's funny, even as I write this I feel the need to check and recheck to make sure I don't somehow say this wrong. Obama is that candidate — the one you are careful writing about. I don't think it's just me. (RS)