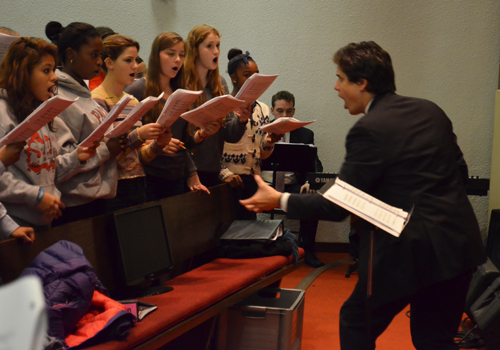 "It's not just about the best music curriculum in the world. The school system needs teachers like Francisco to make the curriculum work." -- Joan Tower

All children should have the opportunity to experience, learn and perform choral music by great composers. Francisco J. Nunez, Artistic Director and Founder of The Young People's Chorus of New York City, believes this. He has partnered with the Carnegie Hall Choral Institute to present a three-day series (February 16 to 18) of new works called the Transient Glory Symposium. Eight conducting fellows will lead music by eight contemporary composers in musical workshops culminating in evening concerts. The symposium is expected to bring national attention to these groundbreaking works and enable more choruses and conductors around the country to perform them.

I had the opportunity to chat with some of the distinguished North American musicians about new works and music in education.

Can I was my first choral composition. Descent is an antidote to Can I. It's a very simple composition. It's a one-minute, almost sight readable piece with descending chords. When I told Francisco it's simple, I think he breathed a sigh of relief because Can I is very difficult.

Descent is sort of spiritual in a way and so I do hope the children will connect with it. 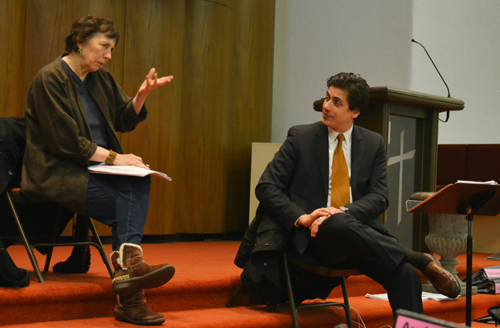 What are the essential elements of a classical and contemporary musical education that children should have?

Howard Gardner's theories on education are the best I know in the sense that he is inviting a lot of the intelligences into the curriculum. Our curriculum right now is verbal and quantitative. The emphasis is on those two things. Howard's idea of 7 intelligences is best because it gives all students the chance to bring their talents forward within a curriculum.

I know more about educating college kids than younger kids. However, the kids in Francisco's chorus are incredible. They are so eager and so focused. They are energetic without being out of control. What Francisco does with his kids should be a part of every school curriculum, but first you have to find enough Franciscos to place in every single school across the country. It's not just about the best music curriculum in the world. The school system needs teachers like Francisco to make a curriculum work.

How can we nurture a greater love of music in our children's education?

I really recommend a book called The Talent Code. The author explains there has to be an environment to nurture a particular subject. There has to be an environment, but in most cases in this country there is not. What I am finding is that what some musicians think are the great classical music compositions, most kids don't necessarily connect with at all. What the orchestras in America have finally woken up to is that they have to get into their communities and into the schools. They're finally doing more outreach into schools because they are losing their audiences. Orchestras will have to get to the audiences coming up. Of course, that is sort of a band-aid approach because the orchestras cannot be in schools everyday. Plus, they're competing with football and other sports, which are very popular. Why do they want to play sports? Why not play an exciting Beethoven symphony instead? Well, because the Beethoven Symphony is not there. There is nobody firing kids up. Some schools manage to get a terrific orchestra with a terrific conductor, but very few. There are sporadic music programs as well around the country, but music has got to be built into the curriculum and it's got to be built into the culture.

Should we evaluate music based on its academic critiques or how an audience connects to it?

I was composer in residence with three orchestras: St. Louis, St. Luke's, and Pittsburgh. The marketing people struggled with this issue all of the time. Of course we got knocked out as living composers. We were a threat, that is, we were a risk! They saw my name and said, "Who's that?" Our culture is so based on how famous you are. There are very few people in the whole world today who are famous in a classical sense. Most people know who Yo Yo Ma is or Joshua Bell.

With the dead composers, the compositions that have survived have filtered down because of the strength of their music. The music has survived. With my music, the benchmark for a successful piece, not always but mostly, is about how often does it get played. I have pieces that get played all the time and people like them. They are quote "successful". I have pieces that are never or hardly ever played and I think they are not that strong. I sort of believe in that as a way of measuring my particular success. With a new piece you can't do that because it doesn't have any history. 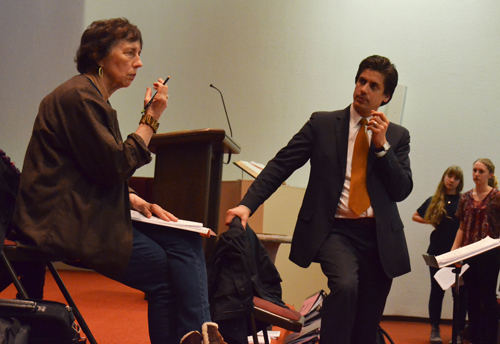 "Howard Gardner's theories on education are the best I know.....he is inviting a lot of the intelligences into the curriculum." -- Joan Tower

How do you know when you have finished a composition? The point at which you are happy with it?

Oh, I am never happy with a new piece of work. Usually, many years later when it has grown up and it has survived a lot of tests, and people say they love the piece, that's when I might say, "Oh, it's not a bad piece." I need the world to confirm things. That's part of my DNA.

Other choral works that are not to be missed? I got additional sneak previews from some of the conducting fellows.

Conducting fellow Dominick DiOrio (Composition Tembandumba by Paquito D'Riviera, which incorporates the poetry of a Puerto Rican poet, the rhythm and timbre of the Cuban claves from the perspective of a Cuban-American composer) tells me Tembandumba is "an infectiously rhythmic boisterous work that brims and bustles with the sounds of drums, claves, and the dance. Our bodies, our minds, and our thoughts are unique, special and worthy of celebration. Anyone that performs Tembandumba and internalizes its message will come across with this simple and profound idea. It teaches students to perform a number of advanced techniques such as complex rhythmic syncopations, extended vocal techniques like sprechstimme, and 8-note chord clusters. Any chorus wanting to tackle the music must master the techniques and deal with the quickly articulated Spanish text."

Conducting fellow Karen Cooksey (Composition Four Heartfelt Anthems by David Del Tredici) explains that Four Heartfelt Anthems offers its composer "the chance to speak to what he enjoyed about his own childhood and provide a bridge between him and the children performing. The work provides the chorus with a challenge beyond the learning of the basic "do re mi", particularly as the first three anthems are unaccompanied and force the singers to rely on their inner sense of pitch. The third movement, subtitled Fuga, is an excellent early exploration of counterpoint in a more modern guise." The work gives the performer a chance to "be an expressive musician as well as an advanced one."

Conducting fellow Tian Hui Ng (Composition Can I by Joan Tower) explains that Can I transports us "into the inner monologue of a child, its attempt to be heard, and finally its poignant message: spend time with me! The singers move between percussive effects like whispering, clapping and stomping, and definite pitch materials built from pentatonic, whole-tone and octatonic scales. This means that singers often have to find their pitches after a long unpitched section. Exploring how to execute these unpitched gestures in a way that is comprehensible to the audience presents yet another unusual learning opportunity. I hope that the music resonates with the choir and offers them an insight into how music can give expression to that which is deep in their hearts."

Conducting fellow Stephanie Mowery (composition Exalted by Michael Gordon) describes Exalted as "a unique combination of rhythmic intensity, power and emotion. The singers will become better musicians as they learn to create new vocal and choral colors and sounds, master new vocal techniques, develop new skills in reading non-traditional musical notation, and experience music making of the highest caliber. My hope is that young singers will experience enormous pride and self-confidence from mastering the complexities of this composition and will make a deeper connection to the message of hope in the face of pain and despair that is shared universally across cultures and faith traditions."

Conducting fellow Dr. Troy David Robertson (composition One Sweet Morning by John Corigliano) explains that "children need to experience music that is challenging, and Corigliano, rather than dulling his compositional voice for the sake of young performers, offers challenges galore. Yet for all of its complexity, the music is still quite accessible. Harmonies that look so daunting on the page sound wonderfully and naturally surprising to the listener and the singer. Corigliano demands a good deal of the young singer's ear: vocal lines move by big leaps, the key of the piece changes frequently, the rhythms are speech-like and irregular, and singers must be very careful in watching for change of the scale. He clearly has great respect for these young musicians, and knows they can accomplish much if much is asked of them."

Are you ready for more music?