In 2000 Ed Harris earned his first "Best Actor in a Leading Role" Academy Award nomination for his portrayal of Jackson Pollock, the iconic American abstract-expressionist painter. The romantic portrayal of an alcohol-driven bohemian seems like a mythical, mid-20th-century moment when artists were focused on art and not the latest triennial or Twitter trend. Well, a hint of that bygone feeling has returned and is currently on view at Steven Wolf Fine Arts in San Francisco. From the exhibition statement:

CLUB PAINT is back after exhibitions at White Columns in New York and Prospect 1.5 in New Orleans with MORE PAINTINGS. The three-person collective makes garishly primitive figurative works that tweak modern masters and openly court bad taste. Imagine if John Waters got Henri Matisse to storyboard the script for Pink Flamingos and you have some idea how CLUB PAINT would like to decorate your house. The collective, now entering its fourth year, has neither slowed its production nor made concessions to a pseudo emotional maturity. This new crop of works are the most confident and self-assured yet. They feature girls in cat suits, sad old queens, DINOSAURS, vertiginous abstractions, and marble heads on columns contemplating paintings of marble heads on columns. CLUB PAINT is Isaac Gray, Erin Allen and Keith Boadwee.

I sat down with Keith Boadwee, one third of the collaborative trio known as CLUB PAINT, to learn more about San Francisco, painting, and same-sex marriage.

People outside San Francisco have an idea that it's a gay city. Do you agree with that? Do you find that the San Francisco audience views your work through a gayer lens?

Yes, San Francisco is a very gay city, but definitely not as overtly gay as when I first started visiting here in the early '80s. Queers are definitely much more "assimilated" in this town now than they were back then, though still very visible. I think my earlier work and my "solo" work, in general, appeals to queers in a big way. Of course, it is great to see someone making fun of the ever-present "straight, white, guy" that dominates art culture. I really gained some notoriety during the rise of "identity art" in the early '90s, and women, people of color, and queers really gained a lot of ground at that time; there's more room for all of us now. One wouldn't be hard-pressed to find examples of successful queer artists, but if you look at the bigger picture, I think that you'd find that the bulk of the power and money still rests in the hands of the patriarchal "old guard" of "straight, white guys."

What are your thoughts on same-sex marriage?

Same-sex marriage is good. I got married when the brief window of opportunity opened here in California. It's obvious gays should have equal civil rights. The "marriage" thing is complicated. I have a big issue with "assimilation" and don't want to be perceived as an "assimilator." I think one of the great things about queer culture is our "otherness." I feel like I know so many younger gay men whose goal it is to mimic the heteronormative paradigm. On the other hand, I know so many older gay men who can't fathom the whole marriage thing at all. They feel that they fought to be free from the societal restraints of marriage and children. I could say I don't care about being married, but there's also the punk-rock part of me that thinks, "You say I can't get married? Watch me!" Ultimately, I do care about the legal protection that marriage affords gay couples. I've seen too many friends treated poorly and stripped of money and property by homophobic families. I'd be OK with it being called "civil union" if it was legally equal to "marriage." I find the religious connotations of that word to be problematic.

Can you describe your experience with "collaboration"?

Collaborating with CLUB PAINT has been a joy. I was hesitant at first. I thought it would be really difficult. If you think about it, being an artist is really all about being an auteur. People look to you to express a unique and singular point of view or aesthetic. It has been hard for people, particularly artists, to understand how we do it. I think most people think of it as each artist making their "part" of the picture, but it's not like that at all. What we've done is create a new vocabulary together that exists as a separate identity outside of all of us. There are sometimes disagreements over individual pictures or curatorial choices. These conflicts create tension, and like any good "band," this creative conflict is what often drives the project and makes it good. Conversely, there are many times when our "band" is just having a blast and "riding the wave."

One might think that artwork that includes images like penises and nude bodies must be read as overtly sexual. Do you think the paintings in the show are about sex? Is sex a metaphor for something else?

I do think the paintings in this show are about sex. I don't think sex in our paintings is a metaphor for something else. We are not a prudish club. We like to put everything on the table. I hope that these pictures are a small blow against sexual repression.

Do you have any advice for me on how to approach CLUB PAINT's paintings?

There's no advice, really, to tell someone how to look at the work. I actually think these works are very accessible. They're humorous, and they're figurative, so there's a lot there for almost anyone to latch onto. These paintings are also riffing on art history and historical modes of painting. Anyone familiar with the modernist cannon of painters will appreciate these on a much deeper level. But that can be said about any art form, right? A deeper understanding of the history of a particular form will bring an enriched reading to the viewer of the contemporary practitioner. While an educated viewer might understand the work on many more levels than an uneducated viewer, I'd never want to eliminate the audience that isn't bringing that type of education to the table. Ultimately, while I can't speak for CLUB PAINT, I like to think of myself as an elitist and a populist. I hope I'd be safe in saying that we all share that perspective, but ultimately you'd have to ask Erin and Isaac for their answers to know if we are all in agreement on that topic.

MORE PAINTINGS is on view at Steven Wolf Fine Arts in San Francisco, Calif. from Feb. 24 to April 7. For more information visit stevenwolffinearts.com. 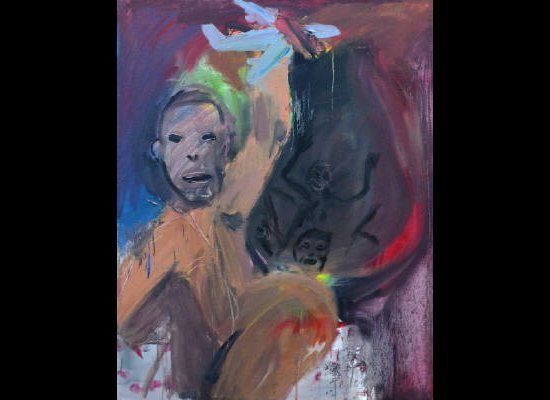