"Prove it" is a phrase we learn from an early age. For most of this year, American Airlines, Delta Air Lines, United Airlines, and seven aviation trade unions have worked hard to prove that massive government subsidies are what have enabled the three fast-growing, Gulf-based airlines - Emirates, Etihad Airways, and Qatar Airways - to expand in the U.S., Europe, and elsewhere. The proof is real: $42 billion in cash and unfair benefits in the past decade. And that huge government largesse violates the "Open Skies" aviation agreements that their governments signed with the U.S., pacts that prohibit subsidies and mandate a level competitive playing field.

The U.S. airlines' effort to "prove it" gained yet more momentum this week with the release of a new study by the respected transportation research firm GRA, which concluded that "of the 23 routes operated by the Gulf carriers to the United States in CY [calendar year] 2014, 19 appear to have lost money . . . The overall loss margin for the three carriers combined is -14.4 percent." The authors continued, "These findings make their [the three Gulf carriers] planned rapid growth in U.S. markets puzzling." That's so polite. To me, there's no puzzle: wheelbarrows of government subsidy cash make all this growth possible. No real airline, accountable to private investors and lenders, could grow that imprudently.

Keeping with the theme of "prove it," it's entirely fair for you to ask "how did they figure this out?" For aviation pros, it's a relatively easy bit of homework, for two main reasons. First, as a vestige of decades of Federal economic regulation, the U.S. Department of Transportation (DOT) requires all airlines, domestic and foreign, to periodically submit passenger volumes (traffic) and revenue information (and additionally requires U.S. carriers to send a range of cost data). These data are, in general, publicly available; access restrictions apply to some sensitive data.

Second, airline financial information is easy to model - many expense calculations are a function of distance, for example. In the 22 years that I worked at American Airlines, we routinely used this public data to project competitors' route profits or losses as part of periodic comparative reviews of financial performance. Indeed, my finance-department colleagues could, solely with publicly-available data, model another airline's entire income statement with astonishing accuracy, something much less possible in other industries.

In this case, the study authors used the traffic and revenue statistics that Emirates, Etihad Airways, and Qatar Airways provided (what the DOT calls T-100 data), combining passenger, cargo, and other revenue (like excess baggage fees). And the authors were careful to assign revenues - using established industry protocols - to the U.S.-Gulf flights by taking a prorated share of a connecting itinerary. For example, two-thirds of Qatar Airways' passengers from the U.S. are bound for 11 cities in India, so the authors allocated to their Miami-Doha route a prorated share of revenue on a Miami-Doha-Mumbai ticket. On the cost side, only Emirates publishes numbers that were deemed "reliable," so the authors used Emirates data to calculate costs for Etihad and Qatar Airways.

The study authors, GRA, Incorporated, are highly credible, having done a range of studies for airlines like British Airways and Qantas, the FAA and foreign governments, Boeing and other major manufacturers, and many others. In short, they know their stuff. And they were very prudent: "we took the most conservative assumption for each component of revenues and costs, meaning that we tended to err on the side of over-stating revenues and under-stating costs." That's the way I would do it, too.

After reading the GRA study, a longtime colleague who spent decades as a network development director for three large U.S. airlines wrote, "These results really aren't surprising. There is so much capacity chasing local and beyond markets. It is very expensive to operate 777 and A380 aircraft, and in order to fill these big planes, these three carriers must offer fares that do not cover their costs."

I suppose Emirates, Etihad, and Qatar Airways will spin the story as "four new routes earn money," but most of us will look at the chart below and focus on the 18 losers - and bear in mind that one route performs so badly that the authors chose to omit it from the chart because it would badly distort the mean (average) loss of minus 14.4 percent. If we were sitting in the board room of a real airline and a finance VP told us that 8 of 19 loss-making routes had negative margins of more than 30 percent, and 4 lost more than 50 percent, I can't imagine the reaction would be friendly. The GRA authors said it well:

"But the preponderance of loss making routes and the size of the losses suggest that the three carriers have over-expanded in U.S. markets beyond levels one could justify from the operating results. This is equally true of Emirates' fifth freedom service between JFK and Milan. No Gulf carrier shows profits on more than 30 percent of the markets it flies to the U.S. The loss margins in many markets would not be sustainable for private companies, nor would private companies be planning to expand in this theater based on such losses." 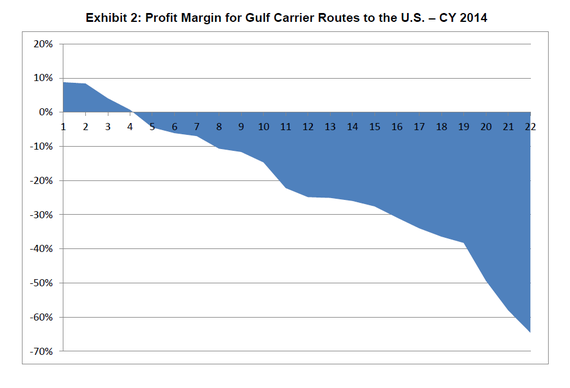 Prove it? The U.S. airlines have done just that, and this latest set of proof points surely should prompt the Obama administration to invite the UAE and Qatar governments to the negotiating table to discuss their abuse of the opportunities we provide them through two Open Skies agreements. U.S. airlines can compete, but not in a massively distorted market.