Racists are coming out of woodwork in North Carolina.

The news of Rakeem Jones, a black protester at Donald Trump's Fayetteville rally who was punched by John McGraw, a 78-year-old white Korean War veteran, made the news rounds this past week. McGraw told Inside Edition that "next time, we might have to kill him." He has now been charged for assault and is due in court in April.

Now there is more news of racist incidents in the Southeastern corner of North Carolina that coincide with Trump's visit to North Carolina.

The first story involves the District 20 race for the State House of Representatives. There are two Republican women, Holly Grange and Tammy Covil, running for the seat. As there are no Democrats running in the district, whoever wins the primary will go on to become the House representative in the state legislature. While Holly Grange does not have experience as an elected official, she is a West Point graduate and has a Juris Doctor degree with a license to practice in Illinois. Tammy Covil is a small business owner and was elected to the Board of Education for New Hanover County in 2012.

Covil made news in June of 2015 for having made a comment on Facebook that "Gay marriage isn't about marriage rights at all, it's about forcing others to accept a perverted lifestyle choice as 'normal.'" She was called upon to resign, but did not. Then in November, 2015, Covil attacked Grange on the alleged business relationship her husband has with Clinton ally Sidney Blumenthal. Covil was in the news again in February, 2016, when it was revealed that she also purchased and created the website www.hollygrange.com which compares Grange to Hillary Clinton.

Yet another example of why the social issues matter in politics. It's important to know where the leaders of our party stand on these issues because they have a profound impact on our society. #TheSocialIssuesMatter.

Now with four days left until the March 15th primary, Covil's campaign has turned racist. It has sent out fliers that shows a young white woman in front of a transgender bathroom with a dark figure wearing a hoodie looming in the background. 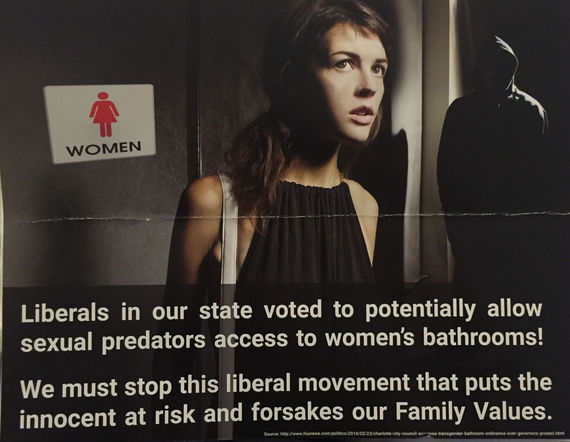 The alleged purpose is to warn the citizens of the district of the Charlotte-style ordinance, which allows transgender individuals to use the bathroom for the gender that they identify with. Even though Covil has stated that she does not see an African-American man in the image, a close-up of the man in the hoodie reveals thick lips and a wider nose base, hinting that he is black. 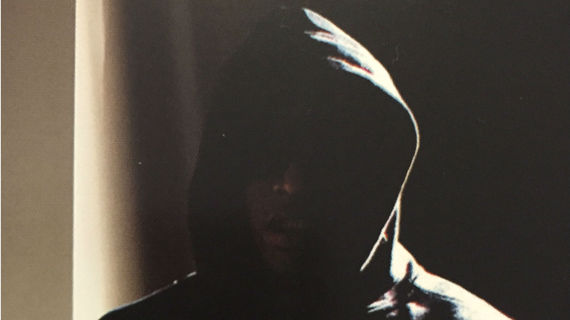 Deborah Dicks Maxwell, the head of the local NAACP, has called Covil out on the racist image of the flier and accused her of using fear to win an election.

In nearby Brunswick County, West Brunswick High School is dealing with an incident during lunch in which white students hung a Confederate in the courtyard and cafeteria. When it was taken down, one student wrapped it around his neck like a cape and ran through the cafeteria, stomped on chocolate milk cartons, yelling "white power!" while being high-fived by other students. 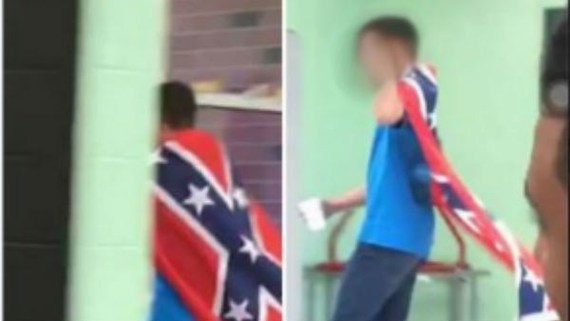 Although the spokesperson for the county schools, Jessica Swencki, observed that "the issues we struggle with as a society sometimes land squarely on the doorsteps of our schools" some parents were upset that the situation was not taken care of when the incident occurred.

Sonya Gore, a student at West Brunswick High, initiated a campaign to wear all black the next day to send a message to the school admin and it was confirmed by the school. Three white students were charged with misdemeanor disorderly conduct by Friday.

The racist rhetoric playing out in politics with Donald Trump as its symbol and deliveryman is unfortunately playing out in schools across the country. We have all seen by now pictures of students holding up cutouts of Trump's face to taunt students of color. We have also heard reports of young students taunting Hispanic students that they will be deported when Donald Trump is president.

As the racist rhetoric crosses over to physical violence at Trump's rallies in Fayetteville, St. Louis, and Chicago, and beyond the blame falls squarely on Trump. He may deny responsibility until the cows come home, but the rally videos show otherwise. Racists across the country are coming out of woodwork, not only in North Carolina, but across the country and they are empowered by Trump's speeches. Trump is not only giving rise to the latent racist sentiments across the country, but also creating new ones among the country's white youth. It is not politics playing out at the schools' doorstep. It is what America would be like if people like Trump give legitimacy to racist thinking.

And that is deeply unsettling. And it will take many years to undo.