Today, SeaWorld CEO Joel Manby and I sent a letter to President Obama urging him to use a wide range of diplomatic tools to pressure Japan to end its commercial whaling activities and to stop contravening international law by slaughtering hundreds of innocent whales. Manby has assured me that this is just a first indicator of SeaWorld's new commitment to advocacy on marine animal protection efforts, and that the company will join with anti-whaling advocates to finish off the era of commercial whaling on our planet.

I've also been speaking with Manby about revving up campaigns to finish off Canada's commercial seal hunt and to fortify global efforts against shark finning. These have been protracted and difficult battles, and the animals need all of the allies they can get. The addition of a major corporate actor, with more than 20 million visitors who pass through its gates, to our side of the issue is an exciting and potentially transformative development. 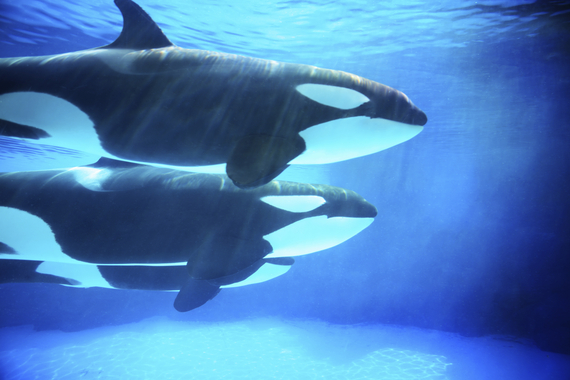 I know and have heard from marine mammal advocates who don't trust SeaWorld. I get their concerns, and I, too, was hesitant even to enter into the discussions (just as SeaWorld distrusted The HSUS and hesitated to open itself up to possible recriminations about entering a dialogue with a long-time critic). But you typically don't make progress without committing to explore ideas and solutions with sincerity. I decided to take a risk and to engage, albeit with limited expectations, perhaps because I had just turned in my manuscript for The Humane Economy which included a long bill of particulars against the company. But after extensive deliberations and give-and-take, SeaWorld made a series of pretty remarkable commitments:

I understand the impulse among so many advocates to call upon SeaWorld to remove orcas from their enclosures and allow them to live in sea pens. I've long talked about that idea, too. We have quite a history with that issue, given that The HSUS was centrally involved in the Keiko project more than 15 years ago and put a million dollars into his release into sea pens and eventually into the wild. Keiko lived in those environments for five years. In terms of improving his individual welfare, I believe the project was a success. Many others, especially the folks at SeaWorld and others from the zoo and aquarium worlds, consider it a failure because Keiko never achieved full independence. But I think everyone - on both sides of this divide -- agrees it's an issue that comes with tremendous challenges and costs and risks and warrants more careful study. It's probably further complicated by the biographies of the whales at SeaWorld, since all but four of the nearly 30 whales are captive-born, and the few that were wild-born have been in captivity for decades.

While The HSUS is committed to looking at the options that exist for captive animals, I want to encourage animal advocates to celebrate the major progress that SeaWorld has made, as we've done, and to inspire the company to take additional positive action across a broad swath of animal protection concerns. What the company has committed to is quite extraordinary, and I urge every advocate to take stock of the unprecedented set of pledges SeaWorld has made - many of them unimaginable even among the core group of advocates and organizations who have been demanding reform for so long.

It was almost exactly a year ago that Ringling Bros. pledged it would phase out its use of elephants in traveling acts - a game-changing announcement for the use of wild animals in circuses. The March 17th announcement from SeaWorld is also tremendously significant and marks a turning point in the movement to phase out the use of orcas for captive display. The effect of Gabriela Cowperthwaite's "Blackfish" was potent and enduring, and, as I argued in my book, the company had to embrace reforms as it confronted a customer base with evolving views on the treatment of marine animals.

SeaWorld's decision to immediately end all orca breeding, and to phase out the theatrical shows at all of its facilities, goes far beyond the terms that had been in play in the active debates going on in states and at the federal level. The California Coastal Commission had pushed the company to end orca breeding in California, and there was a state bill to that effect. But there was nothing like that going on in either Florida or Texas. Federal legislation from Reps. Adam Schiff and Jared Huffman to end orca breeding almost assuredly was not going to be acted upon in this Congress, and wouldn't have been viable in the foreseeable future without a very big shake-up in the November elections. It was not likely that SeaWorld would stop all breeding and end all theatrical shows, and commit to not having orcas at any future facility in the United States or around the world, without years of struggle and expenditures on all sides. SeaWorld moved a long way on these issues, and deserves credit for these dramatic changes.

I have always believed that we not only should be open to change, but that we have to invite it and, when it happens, celebrate it. We want the company to do better, just as we want every company whose conduct falls short of the standards we expect to do better. The purpose of criticisms and protests and lawsuits is to effect reform - not to be on a never-ending treadmill requiring confrontation, opportunity costs, and stalemate. These reforms grew in size and scope because of the negotiations and because we were willing to sit down and start to map out a different future with SeaWorld. The new leader at SeaWorld was the right person on the other side of the table.

When a company commits to reform, it's got to be meaningful, and if it is, it should be embraced. What incentive is there for companies to change when internal voices advocate for the status quo and reformers say "it's not enough"?

By any objective measure, these are substantial moves from SeaWorld - actions that upend its core business and brand, carry the potential to save thousands of other marine mammals at risk, and change the fortunes of countless land and marine animals caught in the conventional food supply chain at SeaWorld and elsewhere. Bravo. That's the sort of change we want to see replicated throughout society.

Read our letter to President Obama »