Since the recent publication of Simone Zelitch's fourth novel, Waveland (The Head and the Hand Press), there have been such a spate of racist and violent events in this country that one could be forgiven for believing we are still somehow mired in the hate and horror of the early 1960's. It actually causes this book to be all the more relevant and worth reading in these strangely polarizing times. 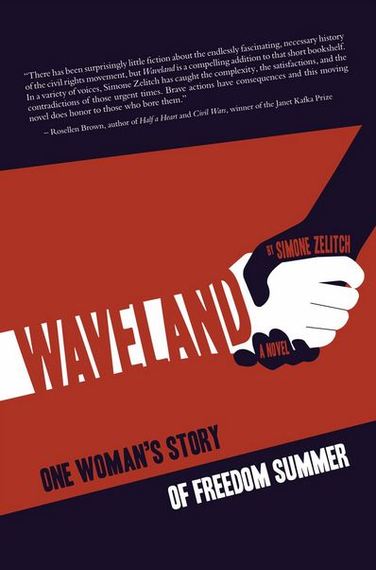 Waveland, named for the town in Mississippi where activists gathered in 1964 to discuss the future of "the Movement," is the skillfully researched tale of a young woman who drives her rickety car down South to throw in with other young whites who earnestly aimed to change the status quo of this country. History tells that almost a thousand Northern college students traveled to Mississippi that year to help out in local communities as needed and register voters.

"Once there was a girl who did everything wrong," the book begins. Some time in the future, Beth is telling her daughter Tamara about the time she participated in a 1963 wade-in to desegregate a public pool near her Philadelphia home. The police arrested all the black demonstrators and left her, the only white person to join them, behind. "Back then, Beth Fine, age twenty, was always, relentlessly occupied. It was as though if she let herself stop moving, something terrible would happen. Everything about her in those days was marked by acute anxiety: buggy hazel eyes, frizzy red hair, a chin wrinkly with concentration. She would storm into rooms, or back into furniture. There wasn't a door she wouldn't slam. In those days, if a gesture wasn't emphatic, it seemed, to her, half-hearted, and force was a form of honesty."

Beth is recruited at Swarthmore by SNCC (the Student Non-Violent Coordinating Committee) for the Mississippi Summer Project. Like many of her generation, and especially at that time, she's just been waiting for the right moment to come along so she can begin her real life. The recruiter fires her up with his speech: "We are David facing Goliath. We are Gideon's army, outnumbered, and you all have to be our trumpet. We may not have watches, but we know what time it is. That's why we all say Freedom Now. Not someday. Now! Hear me, brothers. Freedom!"

Zelitch vividly brings the 1964 southern summer to life and perfectly captures what it is to be young, and brash, and uncaring of any consequence: "They were on the world's edge. Like Beth, they took delight in not being afraid. Soon they would be afraid, not just of sheriffs, unmarked cars, and jail cells, or of the federal government. Fatally, they would be afraid of each other. They would think of the times when they could make open challenges this easily, and they would not believe those times existed. The old bond between them would break, maybe because it had to, maybe because they'd planned, from the start, to make themselves obsolete, maybe because only so many people can fit into a room, and no one wants to shut the door." Her prose is absolutely delicious.

Amazingly, for such a fertile and deeply painful time in our history, there is not a lot of fiction based exclusively on the events of Freedom Summer, making Waveland stand out all the more. Writer Rosellen Brown, author of two books that are based on those events (Civil Wars; Half a Heart) praises Zeltch's work thus: "In a variety of voices, Simone Zelitch has caught the complexity, the satisfaction, and the contradictions of those urgent times, and she's quite remarkably given us more than a little of the generations before and after. Brave actions have consequences and this moving novel does honor to those who bore them."

The writer asks that you track this book down in brick and mortar bookstores or via Small Press Distribution rather than via Amazon. For more information, please visit the website of The Head and the Hand Press.