A widely reported new study claims that people -- especially women -- who have multiple sexual parters before tying the knot, report unhappier marriages down the line.

The study comes to us from The National Marriage Project, based off research from two University of Denver professors, Galena K. Rhoades and Scott M. Stanley, who looked at relationship data collected from 2007 to 2008 of 1,000 unmarried Americans ages 18 to 34. During the following five years, 418 of the participants got married.

Rhoades and Stanley took a closer look at those marriages to see if factors, including participants' sexual past, played a role in current marital quality.

Couples' relationship quality was measured using a four-item version of the Dyadic Adjustment Scale, focusing on relationship happiness, thoughts about separation, frequency of confiding in one another, and a general item about how well things are going (the full scale, however, contains 32 items).

According to researchers, the 23 percent of participants who only had sex with their spouse prior to getting hitched reported higher quality marriages versus those who had other past sexual partners as well.

They claim this finding is especially true for women, writing in the report, "We further found that the more sexual partners a woman had had before marriage, the less happy she reported her marriage to be."

On top of that, researchers say that participants who lived with an S.O. -- who did not become their future spouse -- also reported unhappier marriages (graph below). 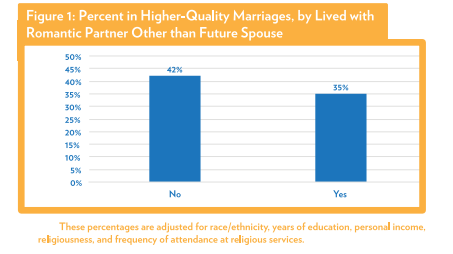 So why would more sexual or relationship experience be associated with worse outcomes later on?

Rhoades and Stanley hypothesize in the report that "more experience may increase one’s awareness of alternative partners." In other words, people who have a number of prior relationships may become dissatisfied more easily.

But isn't that another way to say they might be more aware of a bad relationship? Isn't that a good thing?

Indeed, while the data presented in The Marriage Project's 418-person study is legitimate, experts say that the conclusions drawn from it -- especially those which cast judgement on one's sexual history and incite sentiments of slut-shaming -- may not be entirely accurate.

Researchers in this field, who were not involved with this particular study, told The Huffington Post that these findings should be taken with a grain of salt.

"There are a wide variety of reasons that may lead people to have multiple partners before marriage and, independent of how many partners they have, also be less satisfied in marriage," Dr. Jim McNulty, a social psychology professor from Florida State University who has published a plethora of research on the topic, wrote in an email.

In other words, correlation should never be confused with causation.

"We cannot make any conclusions about cause-and-effect," says Justin Lehmiller, PhD, sex educator and researcher at Purdue University, adding, "Could it be that multiple premarital partners impacts marital happiness? Maybe. But it could also be that people who have more partners have different personalities or different attitudes toward marriage or relationships."

Beyond that, Lehmiller says there may be flaws in the way data was analyzed -- the way in which good marriages were separated from bad marriages was "rather odd" he says. "Even the authors admit that they were 'arbitrary' in their report. They defined 'higher quality marriages' as those in which individuals scored in the top 40 percent ... Why the top 40 percent?"

McNulty also points out that though the authors are respected researchers, the study was not reported by an academic journal nor was it peer-reviewed.

What do you think: could having more relationship experience prior to meeting "the one" actually result in unhappier marriages down the line? Sound off below!

Divorce Findings From The Last 5 Years