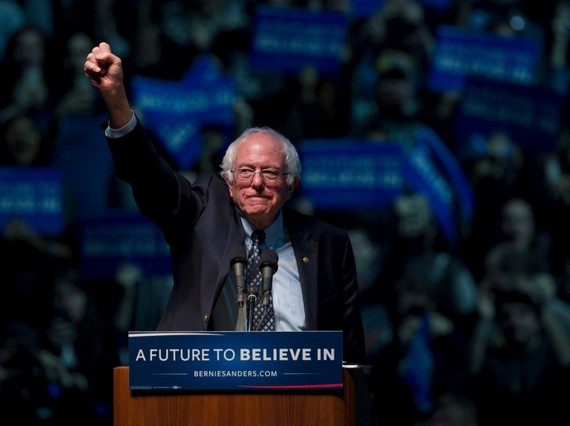 Pretty daunting news for Bernie Sanders. The question is, does it have any basis in fact?

The day before Sanders' win in Michigan, Sanders supporters were celebrating a Michigan State poll showing the Senator within five points of Clinton -- hard on the heels of three polls taken in the first 96 hours of March showing (chronologically) Clinton with a lead of +28, +17, and +11. The trend toward a Sanders win seemed clear to many, yet the Michigan State poll never appeared on Five Thirty Eight, forcing the popular site to declare Sanders' Michigan win "one of the greatest upsets in modern political history" -- but also "among the greatest polling errors in primary history."

One wouldn't expect the justly admired Nate Silver (the founder of Five Thirty Eight) to make the same mistake twice in a week, but it seems possible that that's exactly where the Clinton-Sanders race is headed this coming Tuesday.

Here's what we know: down by 37 in Illinois just five days ago, Sanders is now up by two according to CBS News; down by 30 in Ohio five days ago, Sanders is now down by only single digits; the only polling in Missouri has Sanders in a statistical dead heat with Clinton, per the poll's margin of error; and while the polling in Florida at first blush seems less favorable -- Sanders has "only" cut 17 points off Clinton's 45-point lead in the last 48 hours, according to CBS News -- the Sanders campaign reports its internal polling shows a race in the high single-digits, and given that this internal data turned out to be correct in Michigan, it seems we should all be paying it some mind.

North Carolina is an odd case, given that up until March 7th -- less than a week ago -- the polling was showing Sanders cutting Clinton's lead from 17 points down to 10. All that's happened since then is that Sanders has pulled off "one of the greatest upsets in modern political history"; nevertheless, this week's polls show Clinton extending her lead from 10 points up to somewhere between 23 and 29 points. Does a candidate nearly tripling her lead in a state after granting the largest momentum swing in modern political history to her opponent make any sense to any pollster anywhere?

Now Hillary Clinton's campaign manager, having been among the first -- days before Michigan -- to suggest that that state's primary could be far closer than anticipated, is telling the media that Clinton may well lose Ohio, Missouri,and Illinois. Yet Nate Silver and his crew still show Clinton beating Sanders in those states with odds of (respectively) 98%, 80% and 95%. What does Mook know -- and what does the Sanders campaign know -- that Silver and Five Thirty Eight do not? Are we headed for another Super Tuesday in which the pundits, beforehand, suggest that Sanders has no shot to do well, only to reveal, thereafter, that all the polling was "wrong" and in fact the information coming out of both the Clinton and Sanders campaigns was correct?

Arguably, there has been a concerted effort in the media of late to announce the Clinton-Sanders race as statistically over -- often through the misleading use of "super-delegates" who, per the Democratic National Committee, don't formally vote for (or get counted for) any candidate until the summer -- with the predictable effect of depressing Sanders' turnout on primary days. What would happen if, as this article aims to do, Sanders' momentum and recent polling data were accurately reported by the media, leading prospective Sanders voters to understand, correctly, that their votes this coming Tuesday could change the course of American political history?