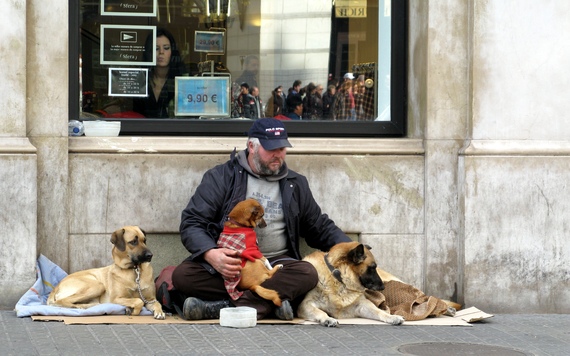 A long, long time ago, in a place far, far away, I used to dream fairly happily about paying the bills. My mother used to have a special table where she spread the household bills, pursing her lips while she scrutinized them beneath her glasses. I watched my bespectacled Mom preoccupied at this task which she never described as a pleasurable activity. Nonetheless, because I was very young in my mind undertaking such a big duty as "paying the bills" became indelibly associated with real maturity and responsibility.

I believed that when I was in my 20s and moved into my first apartment. I brightened with enthusiasm when I paid to have the lights turned on because having my own place was a big step -- and honoring the bills was a part of it. But something happened in the almost 25 years since. The rent payment got higher. The gas. The electricity. The water. The bills to receive the basic things in life kept getting more expensive. I haven't managed to become my managerial mother, scrupulously shouldering every burden. The notices that I once had a silent, humble respect for tend to frighten me when they come due now.

I may arguably have chosen the wrong career path (though journalism seemed a noble profession when I began) to earn enough to pay my bills. Reporters and freelance writers suffer among the worst wage stagnation of any profession in America. I stay in the game despite the rising cost of living by writing more articles and stories that are roughly the equivalent of working two jobs. The upshot for me has been the same as for too many million others: I have to put in longer hours, at work, and I still sometimes feel so anxious over the bills I have come close to believing they're in a conspiracy to undercut me.

That's not paranoia. It's stress. And it is commonplace for lots of Americans like me. The very real fact that my anxiety is pervasive, even "the new normal" in America, is confirmed by a study conducted this year by the NHP Foundation. Seventy-five percent of Americans worried about losing their housing and almost seven in 10 said they struggled to pay the bills. Forty percent said losing their jobs would lead to homelessness.

No wonder. A 2016 study by the personal finance website Bankrate.com concluded that Americans suffer from a startling lack of emergency funds; the majority don't have $1,000 to cover an unanticipated expense. A 2013 Federal Reserve survey of 4,000 respondents reported that 47 percent didn't believe they could swing an extra $400 to cover an emergency room visit.
Judging by these statistics, poverty isn't "knocking at the door." It's already inside the house. The bills keep coming. It's remarkably common to live in fear of not having the power to comfortably pay them.

I see my own anxieties inside all of these studies. I'm very concerned I could lose my housing. And no, I don't know what I would do if I had a $400 health expense. Lower middle class Americans often feel hesitant to explicitly say it. Saying "having trouble paying the bills" is a polite way of you are poor. You could call it fear of "losing everything" but if you name it starkly it's fear of homelessness.

I've come too close to the worst possible scenario too often to not have it replay in my mind whenever I sit at my kitchen table "juggling the bills" (another euphemism that helps you believe you have the upper hand). In my monthly fiscal juggling, my real fear is being able to pay the utilities. Rent increases occur less often, while the utilities fluctuate seasonally, sometimes catching me by surprise. If in a single month the gas, water, and electricity bills all happen to peak to maximum amounts, I won't be able to cover them. The worst possible scenario is that the utilities get cut off. If the electricity bill remains overdue too long and service is shut down, the fee to reconnect the services sky rockets. If I have two disconnects, with reconnect fees, the water reconnect at $100 (plus the overdue bill of a few hundred dollars), the gas reconnect at $175 (plus the overdue bill of a few hundred dollars), I strike out. And the landlord won't let me stick around even if I could drum up the cash in a few weeks. I'm the H-word.

Once, just once per year the state of New Mexico, where I live, helps adults and families pay one utility bill. Get to the Income Support Division fast, though. There are deadlines. The state assistance funding is limited and runs out. Go, go. Too late? Out of luck? Whew. Made it. This time.

Americans fear homelessness because they know they lack disposable income. They don't have the cash (and will probably soon have even less disposable income due to the probable cuts in public services under the Trump regime.) They face every new financial crisis wondering "Will this be the time I end up on the street?" This time may be the last.

Darryl Lorenzo Wellington is a writing fellow for the Center for Community Change.