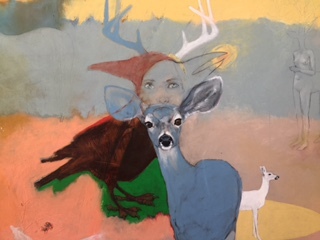 It's summer, and we are deep in the summer blockbuster season. Captain America: Civil War is out already. Soon we'll have installments from Teenage Mutant Ninja Turtles, Star Trek, Ghostbusters, X-Men. For all of the flash and currency of the big-name stars, CGI, and rousing soundtracks, there is one element in these stories that guides all of the others, and it's the oldest: the archetype of the Hero's Journey.

Movie-makers are our contemporary myth tellers. We don't get a lot of time to talk about myth these days except in the negative: "I don't believe in that old myth." And yet myths still give structure to our worldviews, whether we recognize it or not. For the last few decades, a significant proportion of Hollywood movies have used the plotline of the Hero's Journey. As outlined by Joseph Campbell in his 1949 classic, The Hero with a Thousand Faces, the Hero archetype pops up in almost every culture in the world. The story of the Journey follows a kind of circular path with distinct stages. The Hero is called away from his ordinary life and whether he likes it or not, he must battle with forces that could destroy him. He may find a guide. He may find a team of helpers. But ultimately the battle is his alone to win or lose.

George Lucas, the creator of the Star Wars franchise, certainly knew what he was doing when he set Luke Skywalker on the path of the Hero. Lucas consulted with Joseph Campbell about what Campbell called the Monomyth of The Hero's Journey.

Star Wars is not the only movie franchise that uses the Hero's Journey. But it was the first to be consciously made following the stages outlined by Campbell, and because of its success, it has become a template. We are in an age of heroes in popular culture. From the Marvel comic book super-hero franchises, to Jason Bourne, even to the Lion King, and yes, Finding Nemo, all are on Hero Journeys, following the same steps, the same basic circular path. We can be sure to see pieces of the Journey in this summer's movie escapes.

You might think that only male characters are heroes, but many female characters go through these same stages, as Psyche does in the myth of Psyche and Eros, and most recently in the newest Star Wars: The Force Awakens, with Rae, who was the awakened force herself.

Movies are not the only place we find the Hero's Journey. There are dozens of books and guides on how to write an emotionally satisfying story for film or novels, or even biographies. Psychologists often frame a life struggle with the stages of the Journey. Businesses use it to entice customers. It's even used in our political process. But aren't there other kinds of stories?

In our obsession with the Hero's Journey we risk forgetting--or worse never learning--that there are other journeys. There are other paths to maturity and wholeness. There are stories that show very different paths to psychological, spiritual, and cultural wholeness. We need to step outside our dominant cultural language to find them. We need to stop turning every story we hear into a version of our own Hero's Journey. We need to learn to listen, really listen, to other ways of being in the world.

America is rich with stories from other cultures. The people who were native to this continent have stories like the arrival of White Buffalo Woman. She comes to the people at a time of trouble in their community, when hunting is poor and the people might starve. But she doesn't fight demons or stage great battles. Instead, she brings agriculture, crafts and arts, and ceremonies for peace. She brings the things the people need to survive and thrive for generations.

Or we could turn to the Spider Grandmother of the Pueblo people, who sings to create human beings. She led them up through a hollow reed to this world of light and into consciousness. If you are lost, she will perch behind your ear to help you find your way. But know that you must ask for help. Know that you must listen to her quiet voice; you must heed her wisdom.

There is Saint Bridget of the British Isles, who was the goddess Bride before the Romans brought Christianity to Brittan. Bridget, along with her sisters, managed to claim good farm land away from the greedy duke. Ever after, her people would able to feed themselves.

There are the Jataka stories from the Buddhist traditions. These are a collection of stories meant to illuminate the prior lives of Gautama Buddha before he attained Buddha Nature. These stories are sometimes similar to Aesop's tales, but they carry a different idea of what it is to lead a meaningful life. In these tales the gain or loss is not for the main character. It's not even for the man, Gautama. The gain is for us, however far away and however many centuries into the future we live. Buddha's enlightenment opens a door for our own.

Maybe it's too much to ask Hollywood--or summer moviegoers--to give up the Hero archetype all together. But let's remember that the story is not over until the Hero returns and brings healing to his community. It's not enough to vanquish the evil of an alien attack. Before his journey is complete the Hero must return home.

Think of the European folktale of Stone Soup. Three soldiers are traveling home after a long, bloody war. They are tired and they are hungry. But the people of the villages they pass through are afraid of them, their swords, and their anger. The villagers, too, are tired of war and destruction, and they hide in fear from the soldiers. Yet somehow, one of the soldiers uses the very human instincts of curiosity and generosity to make soup out of a stone, and community out of the needs for peace. He is remaking home as the village join in a feast they all prepared. This is a different kind of Hero than Luke Skywalker. And perhaps one who can show us how to walk a path together.