Since moving to Taipei a year ago, I've found that Taiwan, while not yet an A-list tourist destination, is one of those "undiscovered" gems that is now being voraciously advertised in Buzzfeed and HuffPost listicles that address the numerous gustatory, geographical, and touristic delights of the country. Unfortunately susceptible to click-bait, I've read almost every article on Taiwan that I've come across, so I know that the delights of this country are well-chronicled.

Instead of describing the culinary wonders of beef noodle soup and mango shaved ice, or "must-see's" such as Taipei 101, Jiufen, and night markets, here are 7 everyday surprises that are just as much a part of the culture as bubble tea. 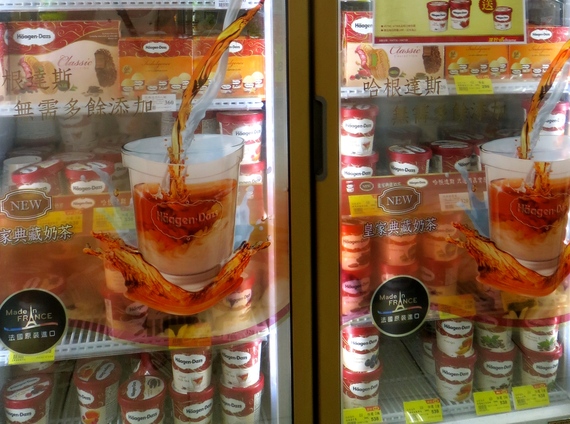 In a country where you can buy a half-gallon of local-brand ice cream for $2-6 USD, a mere pint of Häagen-Dazs will set you back almost $20 USD. Despite the exorbitant expense, it apparently remains popular, with its own freezer section in all grocery stores and most convenience stores. Even Ben & Jerry's, although less common, is less expensive (coming in at around $10 USD for a pint). But, Häagen-Dazs also has lots of Taiwanese-themed flavors (which might be available outside the country as well, but which I've never seen in the US), such as milk tea and mango.

2. Cover Songs
In the year that I've been in Taiwan, I can only count a handful of times that I've heard an original song played in a public place. For some reason, and I'm not sure whether it's an acoustic preference, or some way of dealing with copyright, Taiwanese people prefer covers of popular and sometimes surprisingly more obscure songs. Immediately after Taylor Swift's 1989 album was released, I heard a cover of "Blank Space" in a clothing store. While writing this, I'm sitting in a café listening to a Taiwanese cover of "Country Roads," by John Denver.

3. Steak
While the Western diet does not yet reign supreme here, steak is popular, and Taiwanese steak-houses are not uncommon. You choose between an almost overwhelming variety of meat, with choices of size, cut, country of origin, and even, for the non-beef aficionados, chicken and pork. 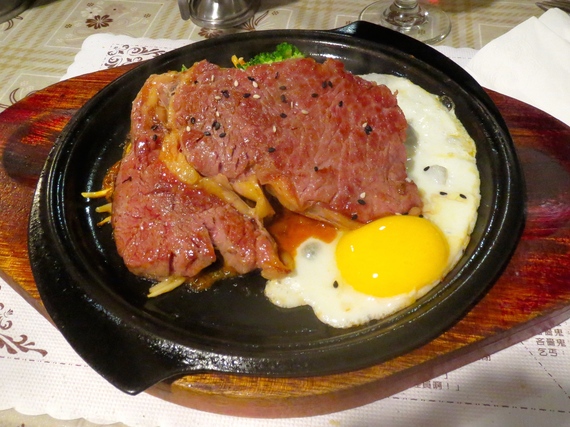 However, what truly surprised me is the presentation of the meal, which is consistent in every establishment. An order of a steak always comes laid over noodles and is served with a sunny-side up egg. It is brought to the table on a cast iron skillet, so the egg finishes cooking at the table. I have no idea what prompted this combination, but I'll have a hard time adapting to egg-less steak when I return to the USA.

4. Sugar
Taiwanese attitudes towards sugar seem incredibly contradictory. The number of young students who claim to dislike chocolate because it is "too sweet" is astounding to me. Some of them have gone on to say that they prefer dark chocolate, which, in my experience, most American children would be hard-pressed to eat because of its bitterness. 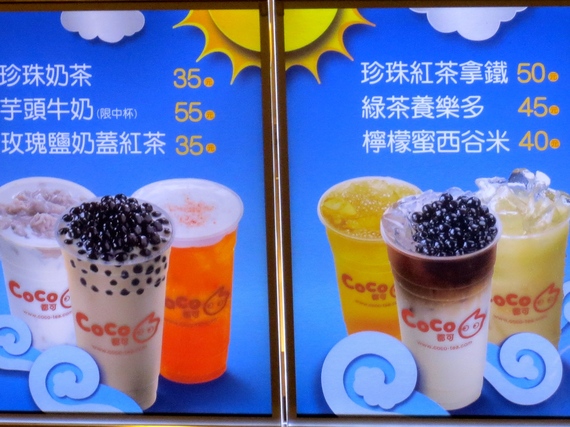 Surprisingly, this attitude is starkly at odds with almost every drink in this country. As the home of bubble tea, tea shops abound. Flavors range from "traditional" bubble milk tea with its characteristic tapioca pearls, to a variety of fruit teas with jellies and seeds. While you can specify your preferred level of sugar, a "normal" amount of sugar is enough to set your teeth on edge and evoke fear of diabetes. Black tea is also a common drink in restaurants, stores, and homes, but it comes laden with so much sugar that it tastes and feels more like syrup. Even Taiwanese bread is incredibly sweet; with a few exceptions, pizza crusts here taste like Wonder Bread.

5. Umbrellas
Having spent most of my life in seasonally cold areas, I knew I'd be in for a shock in the humid heat of Taiwan. What I hadn't expected was the large number of people, mainly women (old and young), who carry umbrellas to shield themselves from the sun. At first I chalked this up to the cultural beauty ideal of having light skin (another shock was the prevalence of beauty products promising "whitening power"). I only recently learned that all sunlight is not created equal, and Taiwan actually has dangerously high levels of UV radiation almost every day in the summer. Although I prefer a good sunscreen, the crowds of umbrella-wielding women might be on to something.

6. Small dogs
Small dogs are the new children in Taipei. Many times I've been about to offer my seat on the MRT to a young couple with a stroller, only to realize that it isn't a baby in the stroller, but a dog. Just yesterday I saw a woman pushing a double-decker dog-stroller carrying a total of three petite pups. Naturally, dog fashion also exists, with the most stylish haircut currently being a sphere or cube shape around the head. 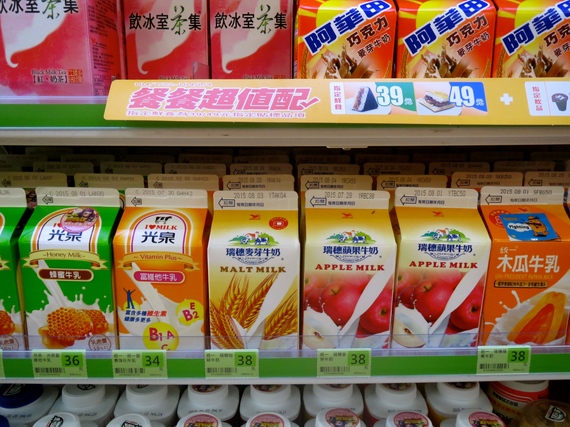 The flavor possibilities of American milk are pretty much maxed out at chocolate and strawberry. In Taiwan, there is a veritable wealth of flavors. In any given 7-Eleven, you can find mango-, papaya-, apple-, banana-, red bean-, mung bean-, honey-, malt-, and green-tea-flavored milks. These are generally delicious, sickly sweet, artificially flavored drinks. However, flavored milk can also be handmade. On one of my first days teaching here, the students excitedly presented me with a glass of banana milk, made by blending bananas with milk in a food processor. It was essentially a very thin banana smoothie.

Honorable Mention: Musical Garbage Trucks
This is an oddity of Taiwan that is well-documented, but it's still worth a mention here because it is so bizarre. Every night people bring their trash bags to designated locations where garbage trucks make regularly scheduled stops. On the route, the trucks play classical music to let people know that it's garbage time. For the rest of my life, I'm going to have the urge to run and get the trash whenever I hear "Für Elise."

More:
teachingTaipeitaiwanFood and DrinkRepublic of China
Newsletter Sign Up
An essential daily guide to achieving the good life
Subscribe to our lifestyle email.
Successfully Subscribed!
Realness delivered to your inbox