On a Saturday morning in the spring following Hurricane Sandy's crash landing on Long Island, hundreds of Patchogue Village residents gathered near the shore of the Great South Bay.

They met on an undeveloped piece of land. By day's end, they'd transformed that spot into Shorefront Park, a dynamic, family-friendly zone featuring the crown jewel of a playground shaped like a pirate ship.

Why did they do it? Why did a community scarred by a natural disaster rally together in this way, in this vulnerable spot? 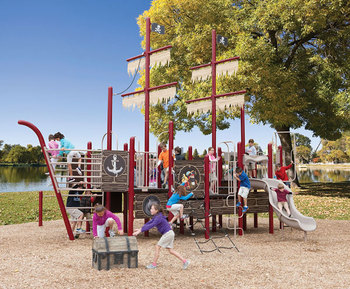 The answers are quite simple. Patchogue had only one playground and needed another. Despite Mother Nature's recently ferocious visit, the location actually was perfect because it usually offers a tranquil, picturesque view, plus there's the practical fact that it borders another park and is across the street from a community center. Most of all, there was the big picture: Patchogue residents understood the importance of creating more places for kids to play, parents to relax while watching their little ones and everyone to have a safe haven to exercise.

"It's just a great community thing," said Nick Racanelli, a Long Island resident who got the ball rolling. "You can't beat it."

Racanelli is a former board chairman for the American Heart Association's Founders Affiliate, which includes New York and other nearby states. He's also in the construction business and had done enough work in Patchogue that he was friendly with Mayor Paul Pontieri and leaders of the Patchogue-based Knapp Swezey Foundation. So when Racanelli learned of an AHA collaboration with fellow nonprofit KaBOOM! to build playgrounds, he immediately thought of Patchogue. He shared his vision with Pontieri and Knapp Swezey Foundation leaders, and they saw what he did. "Build Day" was held June 1, 2013.

"It was a perfect fit, a great asset to the community," Racanelli said. "The mayor calls me all the time and says everything is going great, it's a big hit."

Playgrounds can be a great tool in the effort to save and improve lives, yet their role is vastly underutilized. Jill Vialet has spent nearly two decades trying to change that.

In 1996, while running the Museum of Children's Art in Oakland, California, she met with a school principal who asked for help in reducing the chaos and conflict in the schoolyard during recess. Starting with two schools in Berkeley, she launched Playworks, an organization that now reaches more than 400 schools through direct service and training programs. More than 900,000 children have benefitted from her work, and in 2011 she was recognized by Forbes as being among the top 30 social entrepreneurs in the world. It's my privilege to turn this spot over to Jill to continue this discussion. 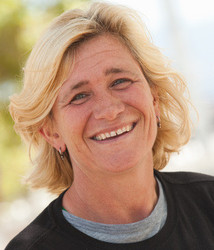 I gave a talk at TEDMED a few weeks back as part of a session entitled, "Play Is Not a Waste of Time." I talked about why play matters and, in speaking to the title of the session, about our lingering ambivalence as a society about this very idea.

There is a lot of evidence out there about the myriad benefits of play and physical activity -- from promoting physical and mental health to improving academic outcomes. A recent study in the journal Pediatrics showed that playful physical activity contributed directly to brain health, and specifically to executive functioning -- multi-tasking, concentrating, self-regulation -- all the characteristics of a good co-worker.

When it comes to cardiovascular health, we know that play is a critical tool to building a lifetime of healthy habits, most notably the daily inclusion of physical activity. One of my favorite quotes comes from Dr. Nick Cavill, who said, "If exercise were a pill, it would be one of the most cost-effective drugs ever invented."

And yet playtime has been on the decline for the past few decades, and too often schools treat recess as a necessary evil, alternating between paying it little attention and using its elimination as a way to punish bad behavior. Compounding this is the fact that it's all too easy to dismiss play as frivolous, a distraction from the real work of learning.

There is the real possibility that our increasing willingness to overlook the importance of play reflects the larger unhealthy trend of glorifying "busy." For many, the idea that play may be part of the answer to the question of how to build better schools simply doesn't add up when the defining narrative celebrates "doing" almost to the exclusion of "being."

But play really does matter. Not just because it contributes to kids' physical and emotional well-being, their academic achievement and their capacity for trust, self-control and conflict resolution. As play theorist Brian Sutton-Smith wrote, "The opposite of play is not work, the opposite of play is depression."

Play is kids' work in that it is a form of experiential learning that contributes directly to a person's ability to handle failure, to work in teams, and to take risks.

The organization I founded 18 years ago, Playworks, believes in the power of play to bring out the best in every kid. In schools all across the country I've watched as our rock-star coaches go into schools and turn around chaotic playgrounds, ensuring that every child gets in the game. The positive results spill over immediately into the classrooms, where students feel more focused and ready to learn, and parents tell us the impact is felt at home as well.

Ultimately, play matters because people matter, and it represents one of the best opportunities in our daily lives for people to really get to know one another -- to see and truly be seen by others. In this regard play is a critical public education tool in its mandate to raise the engaged citizens we so desperately need our children to become, and is at the heart of building healthy communities.