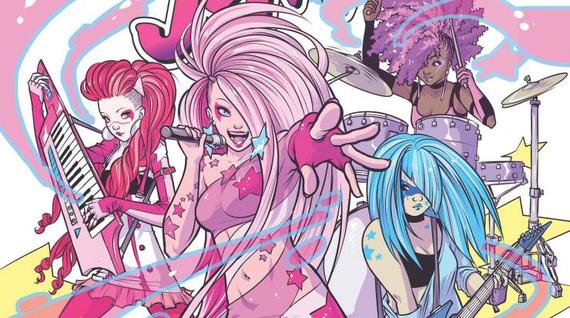 Horrible, right? Not even worth watching. This is what has happened to Jem & the Holograms. Many of us have complained about how 1980s cartoons haven't translated into better modern movies.

Fans gave a universal resounding "No" to the new trailer for the Jem & the Holograms movie. Here are the reasons why fans like me are so angry.

1. Why even call it Jem & the Holograms if there are no holograms? I could be missing something here. Perhaps the producers are being clever? Equating "holograms" with "a new you but not the real you?" But there appears to be no Synergy in the movie.

The entire crux of the series is based around Jem being the creation of supercomputer Synergy and the talent and creativity of Jerrica and her friends. A movie without Synergy is a huge waste of budget dollars, which could have been spent on modern CGI technology.

This is like creating a Transformers movie, but the robots don't actually transform. What's the point?

2. There appear to be no dangerous archrivals. Fans are holding out hope that the Misfits will appear at some point in the movie. Perhaps they will be shown towards the end, hinting at a sequel?

Either way, the lack of Misfits is a major problem with the movie. Actually, the word "major" is an understatement. No Misfits, no Jem.

Some of my favorite childhood memories involve playing with my Stormer doll and listening to "Winning is Everything" over and over again.

In the original cartoon series, the lives of the band or the orphans at the (also missing) Starlight House are constantly in mortal danger, often because of the Misfits. Rewatching the series when it was on the Hub, I was shocked. Someone almost dies in practically every episode. Kind of heavy for a cartoon, but it also made the series more exciting.

At least Michael Bay would have given us some cool action sequences.

3. Jem represented female empowerment, not angst. Some fans were upset that Jerrica and her friends are teenagers and there's a lot of current tech trends like YouTube (which is ironic, considering reason number one).

I actually don't have a problem with this. Not much, anyway. It's a great idea to make them younger and in the present decade to appeal to a younger audience.

But as soon as I heard Jerrica's voiceover on the trailer, I wanted to stop watching. The Jerrica in the cartoon was strong but humble. In the movie she seems withdrawn and whiny.

The movie could have gone with a more ambitious or headstrong Jerrica with big hopes of becoming a business woman or a secret desire to be a superstar, but no resources to become one. Something. Anything.

Perhaps this will be better fleshed out in the movie? Honestly, I don't have much hope.

Christy Marx, who created the series and was inexplicably shut out of this film, once noted the cartoon was never intended to be intentionally feminist, but it ended up that way. Jerrica was a powerful and successful CEO and philanthropist who didn't accept "No" for an answer. The girls often saved themselves from awful situations (even though having Rio there was a bonus).

The premise for the movie seems painfully cliche: how a record label creates a false persona that fans love but the musician secretly hates. Yawn.

A part of me wants to just say, "Oh, well. They've taken another beloved cartoon and ruined it."

But it's much worse than that. It's simply taking the names from a popular cartoon and slapping them onto a completely unrelated and boring movie. How could this happen? I never thought I'd be this angry about an old childhood passion.

I can't believe I once complained about Jazz in the first Transformers movie. At least Jazz battled Megatron.

I'll stick with the original cartoon series streaming on Netflix, and the new comic book version from IDW Publishing. (Cover image above).

entertainmentjem and the holograms
Go To Homepage