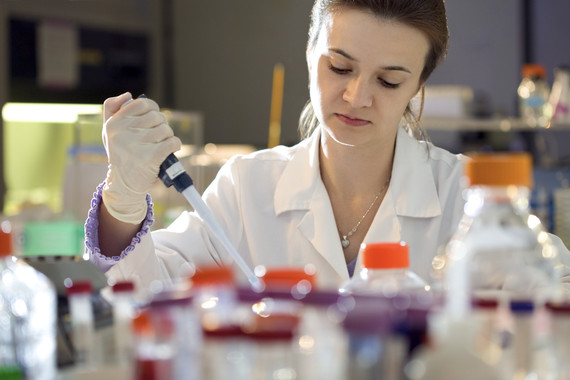 As a high school chemistry and physics teacher, I devote my very being to ensuring that every young woman with the desire and talent has the opportunity to pursue her scientific career of choice. So, when the results of a study coauthored by Erica Blom, Brian Cadena and Benjamin Keys last month tout that every 1% rise in unemployment causes a 2% increase in the number of women pursuing science degrees, I should be ecstatic. But I'm not. On the contrary, I'm concerned. Yes, ostensibly it's good that more women are entering a very male-dominated scientific world. My question is, though, what happens to these women when they finish their degrees and enter the workforce? Do they become the living embodiment of the American dream, or do they soon discover that the American dream is just as elusive as ever?

Case in point. Approximately 50% of all life science majors are women, yet only about 28% of all life science jobs are filled by women, according to statistics given me by Janet Koster, executive director and CEO of American Women in Science (AWIS). Though in the past this drop-off may have been attributed to women leaving the workforce to start families, there is very little evidence that women today are choosing to do so. The exponential growth in the childcare industry alone attests to the fact that mothers today are remaining in the workforce after pregnancy. Further, academia, a traditional career path for those with doctoral degrees, "is not hiring tenure-type professors the way they used to," explains Koster. "Those jobs are a few and far between, and so now you have somebody that's coming out on the other end [and] their education post-docs are getting longer -- some have done a second post-doc -- [and she's] in her late thirties and can't find a job."

And, even when women do get jobs in their chosen scientific fields, research suggests that they do not get paid what their male counterparts do. One reason for this is the gender gap in the scientific fields women and men choose to pursue. Women are still severely underrepresented in the engineering fields, which on average require fewer years of education and oftentimes no more than a bachelor's degree to procure a high-paying job right out of college. This implicit bias that "girls don't do engineering" which we teach our girls at every juncture, coupled with the fact that women tend to pursue socially conscious scientific fields such as public health and environmental science, results in women occupying a far smaller percentage of the private workplace, and a much greater percentage of lower-paying state and local government jobs.

But, before arguing that this is comparing apples to oranges, when we compare apples to apples, a female engineer to a male engineer performing the same job responsibilities, female engineers tend to make from 87 cents for every dollar that their male counterparts do, according to data from a 1995 National Science Foundation survey.

Further, if and when female scientists do find jobs, albeit at slightly lower salaries, the oppressive culture in male-dominated scientific workplaces oftentimes leads female scientists to leave their fields for rosier pastures. "What we see at AWIS is a growing portion of our membership moving off the bench and into a whole host of jobs that aren't necessarily doing science specific to their science. So we see women moving into public policy. We see women moving into communications. We see women moving into patent law. That's a hot new space for a lot of folks. Again, I think it's kind of smart really because, you need to have a degree in biology but then you go on [and get] a law degree and you're making a heck of a lot more money than you are as a biologist," Janet Koster continues.

All things being equal, as mentor to many promising young students at the beginning of their scientific career trajectory, I would much rather have women earning science degrees because that's where their passion and talent lie, rather than it being economically advantageous. Unfortunately, with the implicit bias coursing through our families, our televisions, and in the very words with which our earliest math teachers praise and guide us, far fewer women have the genuine opportunity to discover these passions, let alone pursue them. So, in the meantime, if it's a recession that closes the gender gap, I'll take it. But we've only just begun.