You could look at The Story of God With Morgan Freeman as a sequel to The Bucket List.

Smashing up expensive racing cars with Jack Nicholson is fun and all that, but what happens, you know, next? 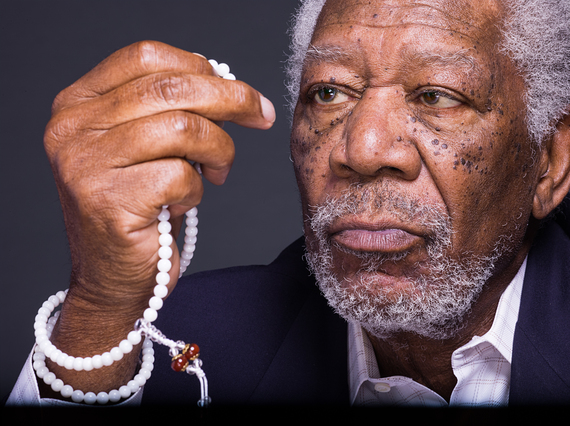 The Story of God, a six-part National Geographic special that launches Sunday at 9 p.m. ET, lets Freeman explore an infinitely expansive subject with which he has long professed fascination: what exists out there beyond what we can tangibly identify through our five senses.

As the scope of the project suggests, this is not popcorn television. It requires the viewer to pay attention and offers rewards commensurate with that involvement.

To confirm the obvious, Freeman doesn't claim to have produced a definitive factual biography of The Almighty. Rather, he examines the historical and theological facets of humankind's relationship with a perceived higher being.

The first episode deals with the afterlife, and how our perception of an afterlife shapes our behavior and our beliefs while life is still in progress. 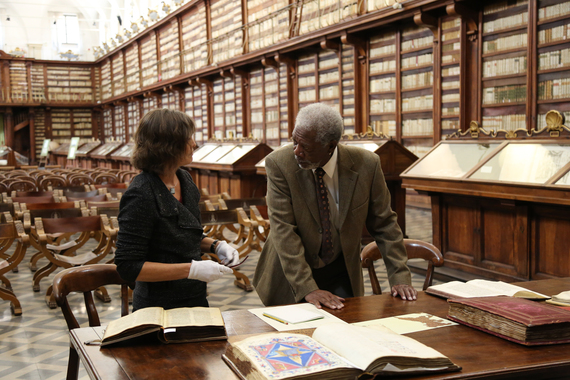 The second Sunday's episode is "End of Days," examining man's fascination with the apocalypse. (Above: Freeman with a fragment from the book of Revelation.) Subsequent weeks, in order, tackle "Creation," "Who is God?," "Evil" and "Miracles."

Freeman, who coproduced the series with Lori McCreary and James Younger, serves as host, narrator and a major presence.

In the opening "Afterlife" episode, he weaves stories of the Egyptian pharaohs and their pyramid monuments with his own memories of growing up in Greenwood, Miss., and losing his brother.

Something of his brother lives on in him, he says, the same way something of Ramesses II lives through inscriptions on the walls of his tomb.

While The Story of God has a consistently respectful and even reverent tone, it may not please viewers who strongly feel their own deity, or their own beliefs, hold the only truth.

Freeman visits Hindus, Muslims, Jews, Christians, Native Americans and others, noting their varying beliefs in matters from the origin of the universe to what happens after death.

He notes that Hindus, for example, believe we are resurrected, perhaps many times. That's not a reward. That's an indication we didn't get it right the last time, so we continue to be resurrected until we do.

The goal is to live such a good life that one no longer needs to be resurrected, but ascends to a state of eternal energy, harmonious with the universe.

That's in some contrast to Christianity, where belief in the resurrection of Jesus offers the path to atonement for all our mortal sins.

The Story of God meticulously traces major religions back to their known origins, and while that inevitably gives some of the discussion a theological grounding, Freeman also takes care to acknowledge the concrete implications in daily life.

That covers matters from the persecution of early Christians by the Romans to the contemporary issue of modern radical Islam.

Freeman talks with a former recruiter for militant Islamic groups, who explains that he was radicalized while growing up in the United Kingdom when he saw his friends attacked and beaten by white supremacists.

He, Freeman and others stress that militant groups comprise an infinitesimal percentage of the world's Muslim population. Still, his story lends strong support to the argument that trying to isolate and stigmatize Muslims seeds more militant radicalism, not less. 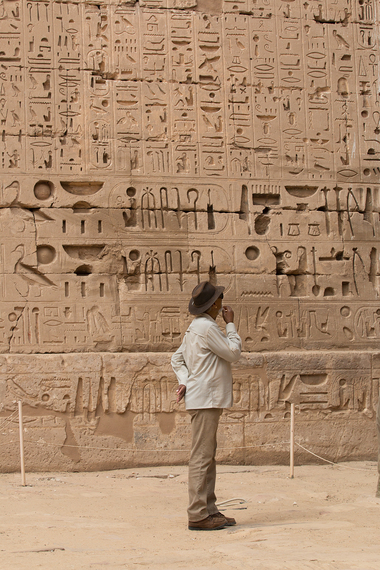 Not surprisingly, Freeman acknowledges at many points in the series that his exploration leaves him with more questions, not more answers.

On the subject of the creation, for instance, he lays out the physical scientific evidence. He also asks whether, within that evidence, there could have been a divine hand at work.

Looking forward, Freeman notes some scientists are confident technology and our growing knowledge of the brain may one day enable us to catch up with science fiction and create a robot with a human soul.

For the present, though, The Story Of God is mostly a story of our response to our own faith. God is largely whoever or whatever we believe Him or Her to be, and those beliefs have shaped much of human history.

Freeman makes that complex discussion engaging, if only through his own palpable fascination with it.

All we really know for sure, of course, is that almost all of us have considered these questions at some point - and no one, so far, has found a way to cross it off the bucket list.