Without warning, the orcas attack. Individually and in pairs they ram, slam and deliver striking blows against the body of their innocent prey with such violence and force as to lift her out of the water.

Vicious bite and rake marks leave a bloody reminder of what just happened to the helpless victim who was cornered with nowhere to hide and no family members to protect her; even the humans who looked on from a few feet away were helpless to stop the attack -- or too disinterested to care.

Is this the law of nature, survival of the fittest; or is this simply the day-to-day life of a wild orca being held in captivity? 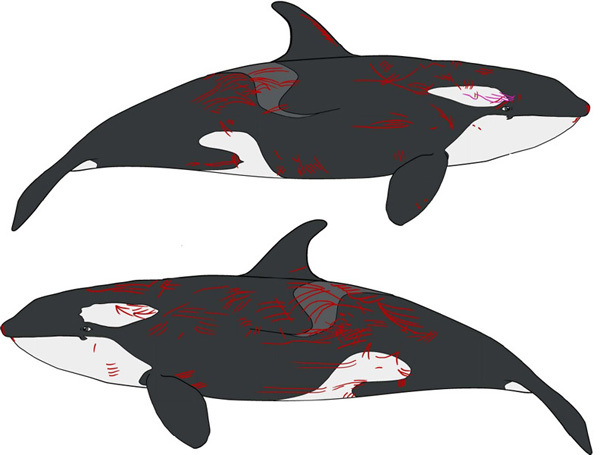 "Rake" marks identified in red. Since her arrival at Loro Parque on the 29th of November 2011, Morgan has acquired an excessive number of rake marks inflicted by other orca.

For the young female orca known as Morgan, the brutal bullying by the other orcas at Loro Parque is the sad reality she faces for the rest of her life unless a court in the Netherlands intervenes and gives her a second chance to rejoin her family so she can live out her life wild and free - back in the ocean where she belongs.

When Morgan was found swimming alone and taken from the Wadden Sea in June 2010, not too many people were watching and few uttered words of concern, believing she would soon be returned to the sea. A year and a half later, when Morgan was hoisted in a sling and taken from the Dolfinarium in Harderwijk, Netherlands and sent to Loro Parque at Tenerife, Spain a lot of people were watching and even more spoke out, but their protests were silenced and their voices were ignored.

Now the entire world is watching what happens to Morgan, and the collective voice of our civilized society must be heard -- Morgan needs to be free!

On November 1, 2012 lawyers and orca experts presented Morgan's case before a three judge panel of the District Court in Amsterdam. The hearing lasted the entire day, with over eight hours of scientific evidence and expert testimony being presented.

The Dutch courtroom was filled with Morgan's supporters including Dr. Ingrid Visser and Jeff Foster. Foster, who has been involved in the releases of two other orcas, Keiko and Springer, told the court he believes that Morgan "is an excellent candidate" for rehabilitation and release.

Also present in the courtroom was Jean-Michel Cousteau representing the Ocean Futures Society. Cousteau made the trip to Amsterdam to personally emphasize the importance and urgent nature of this case. A detailed account of the court hearing can be found here.

The judges have been asked to consider whether it is in Morgan's best interest to remain in captivity at Loro Parque, or whether she should be returned to the Netherlands so that she can be released back into the wild pursuant to a rehabilitation and release plan that has been prepared specifically for her by a panel of world renowned orca experts.

The Dutch court was also asked to consider whether Morgan's EU CITES Transport Certificate, which allowed Morgan to be sent to Loro Parque, has been violated, and whether it ever should have been issued by the Dutch government in the first place. The transport certificate, which was issued exclusively for "research" purposes, excludes commercial exploitation of Morgan for use in shows like those she is being forced to perform in at Loro Parque. The terms of the permit also appear to prohibit breeding Morgan with the captive orcas at Loro Parque which are owned by Seaworld.

A report prepared by Dr. Ingrid Visser for the Free Morgan Foundation was the focus of discussion once the hearing commenced. Dr. Visser's Report on the Physical and Behavioral status of Morgan the Wild-Born Orca held in Captivity, at Loro Parque, Tenerife, Spain, chronicles and documents 77 hours and 16 minutes of personal observation by Dr. Visser of Morgan at Loro Parque.

The damning report by Dr. Visser is a condemnation of the conditions and treatment of Morgan at Loro Parque. The report documents an unprecedented 91 aggression events towards Morgan by other orca; it shows that Morgan was attacked more than once an hour during the time she was observed; and it establishes that Morgan is over 100 times more likely to be attacked at Loro Parque than were orca at a different facility in a similar study. Perhaps the most telling and compelling evidence are the 320 puncture and bite marks which have been photographed and documented since Morgan arrived at Loro Parque.

In stark contrast to the Visser report, the argument for keeping Moran in captivity at Loro Parque is made in a document prepared by F. Javier Almunia Portolés, Doctor in Marine Sciences, and Deputy Director of Loro Parque Fundacion. His Report on the introduction of a rescued Ornicus orca individual into the Orca Ocean group appears lacking in both substance and relevant fact.

Dr. Almunia Portolés characterizes Morgan's adaptation with the Loro Parque facilities and staff as unremarkable and suggests that Morgan's integration with the other orca has gone according to plan. But his report dismisses violent acts of bullying as mere play, and discounts excessive rake marks as normal, and not a cause for concern. He also fails to address the shortcomings of the facility itself, misrepresenting the availability of shade at the various holding tanks and completely avoiding the fact that Loro Parque does not have enough orca tanks or separate pools to ensure separation and segregation of incompatible orca (see Visser and Pozzato reports).

The shortcomings of the report by Dr. Almunia Portolés are addressed in a scathing point-by-point rebuttal prepared by Dr. Lara Pozzato, also for the Free Morgan Foundation. In Refuting the "Report on the introduction of a rescued Ornicus orca individual into the Orca Ocean group" by F.J. Almunia Portolés, Dr. Pozzato picks up where Dr. Visser left off. Pie charts document Morgan's time budgets for position (i.e. submerged, stationed, surface); facility use (i.e. access to various pools); behavior and activity time with trainers; and "other behaviors" (biting concrete, body slamming, loud vocalizations).

The Visser and Pozzato reports paint a bleak picture of a captive orca environment that is void of nearly all orca research value, noting that Loro Parque's primary research interests are birds not orca. There is nothing natural about the physical environment or social environment at Loro Parque, where orcas are trained to perform tricks for treats. The captive-bred orca at Loro Parque exhibit violent and stereotypical behavior towards their trainers and other orca, and in the case of the wild-born Morgan, it is obvious that Loro Parque is not a suitable environment for her wellbeing.

Visser and Pozzato deliver a devastating one-two punch that the Dutch court will surely have
to acknowledge as persuasive, and whatever hesitance or concern the Dutch government had before -- which led to issuance of the CITES permit to transport Morgan to Spain for "research" purposes in the first place -- must now be replaced by decisive action and a commitment by the Dutch government to demand the immediate return of Morgan to the Netherlands for a real opportunity at rehabilitation and release.

While the legal arguments will be made before a court of law in Amsterdam, extending far beyond the courthouse steps lies an international community of ocean conservation and marine life advocates including HSH Prince Albert II of Monaco and Jean-Michel Cousteau who have issued statements of support along with Celine Cousteau, Fabien Cousteau, Dr. Sylvia Earle, Robert Wyland, Ady Gil, Tanya Streeter, Lee Harrison and Jim Toomey who have all fought to bring awareness of Morgan's case to the world at large and before the court of public opinion. They are joined by nearly 150,000 others from all walks of life and all corners of the planet who have signed the petition to free Morgan with thousands more signing the petition each day.

In this Free Morgan PSA with Jean-Michel Cousteau, the late Mike deGruy said it best with a raw passion and conviction we should all try to emulate:

I think the most effective thing we can do right now is spread the word, go to the website freemorgan.org, read about it, learn about Morgan, learn what's happening, don't take my word for it, and then spread the word, there is huge strength in numbers, and we need to communicate to the Netherlands government that this isn't right, it wasn't right from the beginning and it isn't right now, Morgan needs to be free.

The court's decision on the fate of Morgan will be announced on December 13, 2012. Until then, Morgan's wellbeing remains in the hands of the staff at Loro Parque, and her supporters can only sit and wait and hope and pray that Morgan stays healthy and doesn't "conveniently" become pregnant in captivity before the case is resolved and she can be released.

What happens to Morgan won't be the end of the story, it will just be the beginning. Ultimately it is up to us -- you and me -- society, to determine whether we will continue to condone the capture, breeding and captivity of orca for human entertainment. Make sure your voice is heard. To learn more go to www.freemorgan.org.