(RNS) India burst with color Monday (March 17), as Hindus observed the playful festival of Holi by dashing each other with brightly colored powder.

Americans partake of the spring festival, too. But at the largest Holi festival in the United States, the majority of participants won’t be Hindus — they’ll be Mormons.

“In Utah, if you go anywhere and mention the Festival of Colors to anybody, they’ll know exactly what you’re talking about and their face will light up,” said Caru Das, priest at Radha Krishna Temple in Spanish Fork, Utah, and the main organizer of the town’s Holi celebration, known as the Festival of Colors, which will be celebrated this year on March 29 and 30.

Spanish Fork, about 10 miles south of Provo and Brigham Young University, has been home to a congregation of Hare Krishna devotees since 1982. They started hosting Holi celebrations in 1989. When festival organizers introduced rock bands into the mix, the thousands of young students up the road began to take notice. Das said the first few festivals had about 300 attendees; a few years later it was 3,000, then 10,000. In recent years, the numbers have been close to 70,000, spread out over two days.

“It’s one of the biggest events” in the area, said Garrett Gray, a Mormon and a sophomore business management major at BYU. “I’d say a huge majority of students go.”

Festival organizers have found a niche serving young people who want to have fun, but without the alcohol or drug use associated with other kinds of rock concerts or large festivals, Das said.

“It kind of worked out ideally,” Das said. “They can actually express themselves spiritually without the taint of unwanted activities going on in the same venue.”

While Mormon students make up a large portion of the crowd at the Spanish Fork Festival of Colors, they are not the only demographic represented. Sonal Yadav moved to Utah to pursue a master’s in business administration at BYU. A Hindu, raised in New Delhi, she said Holi has always been her favorite holiday.

Yadav said she was thrilled to discover Spanish Fork had a Holi festival. “I went both days,” she said. “I had a blast. I really enjoyed myself!”

In India, most Hindus celebrate Holi with spontaneous games between friends or neighbors, so Yadav said Spanish Fork’s festival, which has a $3 admission fee, a concert stage and a formal countdown to kick off the color throwing, is not exactly like home. But the friendly and fun atmosphere, she said, is the same.

Yadav’s only criticism of the event, which celebrates renewal and love of the divine, is that some of the religious elements of the holiday seem to get lost in translation.

For example, she said the young Mormons at the festival happily chanted “Hare Rama, Hare Krishna,” the god the festival celebrates. But she added: “I would be surprised if those youngsters really knew what the festival was all about.”

Gray agreed that he and most of his friends were in the dark about the meaning behind the colors.

“To be honest, I really don’t know what it symbolizes for their religion, and I think the majority of people there feel that same way,” Gray said.

But Das said the intention of the festival is to create a welcoming space for people of all faiths. Das is continuing to grow his festivals to “let everyone experience this wonderful event.” The Festival of Colors, in its 25th year, now has events in seven cities across the Western U.S., including Las Vegas and Los Angeles. But Spanish Fork’s festival, with its surprising blend of Mormon and Hindu attendees, remains the largest.

“I imagine there’s probably a few people who would argue that it’s not consistent with our beliefs,” Gray said, “but for the most part, I love to embrace and appreciate all cultures and religions.”

Yadav said her Mormon peers have been very welcoming to her as a Hindu and she credits their cultural sensitivity with their missions work abroad.

She said she chose BYU because she wanted a school with strong family values, said that even after two years on the mostly Mormon campus, she feels her Hindu faith has only grown stronger. Having engaged in religious discussions with her classmates and attended a few Mormon services with her friends, she said she sees strong parallels between the religions.

“When you put colors on your face you cannot make out one from another who the person is,” she said. “Really, it’s the colors of brotherhood, love and friendship.” 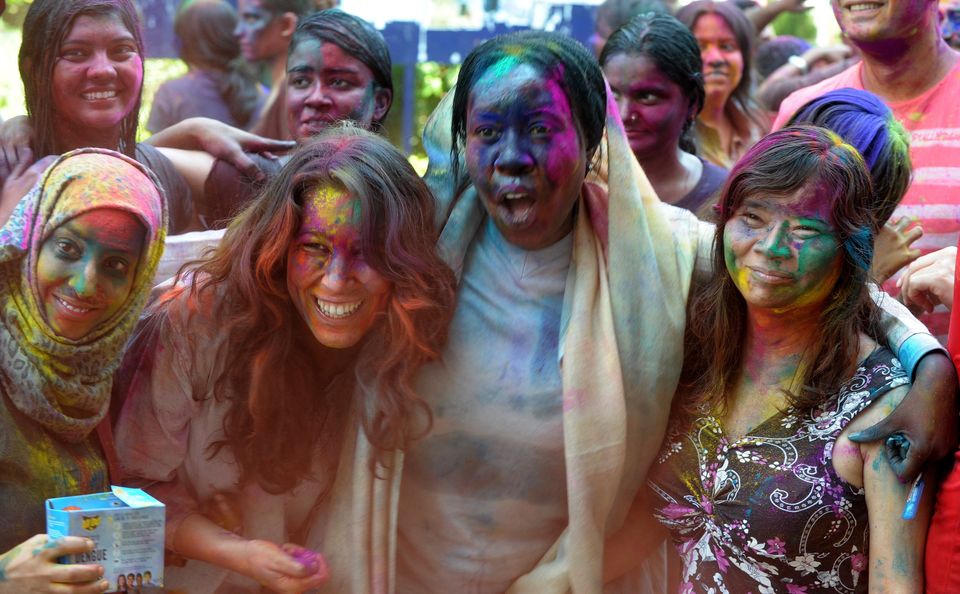 1 / 34
INDIA-RELIGION-FESTIVAL-HOLI
Students of English and Foreign Languages University(EFL)pose during Holi celebrations in Hyderabad on March 17, 2014. Holi, also called the Festival of Colours, is a popular Hindu spring festival observed in India at the end of the winter season on the last full moon day of the lunar month. AFP PHOTO/Noah SEELAM (Photo credit should read NOAH SEELAM/AFP/Getty Images)
Getty Images