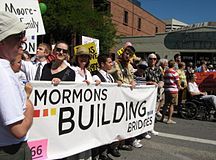 1. In the 1970s and 1980s, the Mormon church taught that being gay was an evil "lifestyle choice," and that could be reversed through various therapies. It seems that from the "Mormons and Gays" website that the church has rejected the idea that being gay is a choice. What progress have you seen from that time period to this in being gay and Mormon?

We've experienced a momentous shift in the tone with which the church addresses us and our lived experience. They have attempted to improve the Church environment for LGBT people so that it is a safer and more welcoming space. In some circles you'll hear stories of inclusion and love and empathy and understanding with leaders stretching themselves to make space and accommodations for LGBT people, given the parameters set-up by the Church. But in other circles, you hear the same old tragic stories of homophobia and hostility with leaders and fellow members explicitly shunning and excluding LGBT members.

2. The hierarchy of the Mormon church now uses the phrase "Same-Sex Attraction" rather than "gay" or "LGBT." Do you think there's still an undercurrent of pathology in this term?

In a word, yes. Before the 1950s the church used the phrase "the sin that dare not speak its name" with the occasional use of the explicitly Biblical/Victorian term of "sodomy." This came from the predominant perception of sexuality as a behavioral choice rather than an expression of orientation. It wasn't until the assignment of Elders Kimball and Peterson to study the topic because of concerns that the behavior or "practice" had begun to "infiltrate the Church," that Mormon leaders reluctantly began using the clinical term of "homosexuality" from the 1960s through the late '80s.

As the Church began to enter same sex marriage legal battles and with the appointment of Elder Oaks to the Quorum of the 12 Apostles, the term "same gender attraction" came into use. The explicit intention was to dissuade gay members from "over identifying with the temporary mortal condition" but rather to keep their identity fixed as "children of God" and "disciples of Christ" with the inference that all of God's children are inherently heterosexual (or more precisely, void of orientation since it is irrelevant in spiritual terms).

The inference embedded in the term "same sex attraction" is 1. that it is merely an attraction/feeling/tendency that is a condition of this mortal existence for some people and is like many other maladies that will be removed by death or by the resurrection; and 2. it is therefore something that we experience because of forces or causes outside our innate self and is not part of our innate self as the usage of the sexual orientation nomenclature would infer; and 3. therefore it is something that can be managed and abstained from in this life.

These days the preferred phraseology for members of the Church in good standing is to refer to oneself as "experiencing same sex attraction" while those who are more suspect in the eyes of the faith community would say that they "identify as LGBT." A couple of notable exceptions underscore the point. The Church opted to use the word "gay" in the url for its official website addressing the topic of same sex attraction, mormonsandgays.org. But it is important to remember that the audience for the site was originally an "out group" rather than the "in group" of Church membership so the Church formed its messaging accordingly. Another notable exception came in early 2015 as the Church officially came out in support of legislation that would, in its view, properly balance the interests of the LGBT community and the Church, the "Utah Compromise."

3. Since being openly and practicing LGBT still is a reason for being excommunicated from the Mormon church, there are few Mormons who can act as loving role models for young Mormons who are currently coming up through the ranks. Is there any healthy choice other than leaving Mormonism for them?

Yes, there is but access to it is highly restricted or discouraged by both the LGBT and LDS communities because the dominant narrative and cultural norm is still locked into the mindset that someone must choose to be "all in" or "all out." Again, this is caused by both the Church and LGBT communities. Individuals and families can find a healthy place for themselves that does not necessarily (but may) include distancing themselves from the Church or from their LGBT identity.

The emphasis has to be on the process of finding that space and far less on the outcome of that process. The Circles of Empathy practice is one such process growing in visibility and availability to the LDS community. There is also a growing number of culturally competent mental health professional who are able to walk with individuals through the careful process of self-determination according to the recommendations given in the APA's report on proper responses to sexual/religious conflicts.

Of course, practically speaking, with the advent of the Nov 5 LDS Handbook of Instructions policy changes, the options of "middle ground" or "third path" or a self-made liminal space within the Church have been summarily cut off with little room for individual self-determination on the part of LGB members or their local leader.

4. Do you think that the Mormon church is still encouraging mixed-orientation-marriages as the only solution for LGBT Mormons who want to stay active in the church? Or is celibacy and remaining quiet about the gay now the preferred option?

The Church is no longer explicitly encouraging LGBT members to marry as a cure or fix for their sexual orientation. But LDS doctrine and culture however does, of course, sacralize marriage as the ultimate saving ordinance for all members, and thus man-woman marriage continues to heavily occupy Church teachings, policies, and ideology.

As a default "solution," LGBT members are left with celibacy as the only remaining option - not because it is the preferred option but because it is the only one left. It's important to understand the subtle distinction here. The Church does not heavily emphasize celibacy because there is little to no actual doctrine or scriptural text encouraging it as a path of discipleship. In fact, there are some scriptural verses discouraging it.

The Church prefers instead to maintain a prescriptive stance focused on the eventual man-woman marriage for all of God's children. For those "few" who cannot attain such a marriage in this life, the message is simply to "hold on" and have faith that the promised blessing of man-woman marriage will be made available to them eventually.

5. When there are no openly gay church leaders in the highest levels, how can they understand and speak to this "problem" with compassion? Is it possible that we will ever see a gay member of the Twelve?

I would speculate that we will not see a "gay Apostle" unless or until there is a change in the doctrines of the Church concerning chastity and marriage. Baring such doctrinal changes, the closest we'll ever come to seeing a "gay Apostle" would be someone who "formerly experienced same sex attraction" and through "faith and obedience" has since overcome the influence of that "tendency" to choose behaviors in alignment with the doctrines and commandments of God.

I believe that the leaders try to acknowledge the pain and struggles of LGBT Mormons and show sympathy for the struggle. But that is not enough. What the situation requires is the healing and revelatory power of empathy. There is a very real and egregious empathy gap between the lived experiences of LGBT members and the hearts and minds of the Church leadership - and it must be overcome if we are going to see real substantial change of any kind. 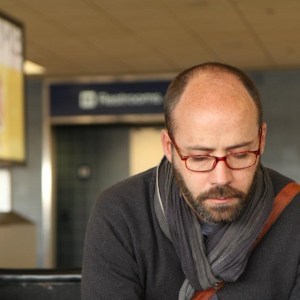 Kendall Wilcox is the producer of Emmy Award-winning nonfiction television programming for the Discovery Channel, BYU Television, and PBS, and has taught courses in documentary production at BYU. Since 2010, Wilcox has been producing a documentary called Far Between that portrays what it means to be LGBTQI/SSA and Mormon. In 2011, Kendall founded the Empathy First Initiative which is dedicated to cultivating habits of empathy for addressing divisive social issues. Since 2013, Kendall has developed and grown Circles of Empathy, is a small-group discussion practice that helps straight and LGBTQI/SSA Mormons process the conflict between the teachings of the LDS Church and their feelings about homosexuality or homosexual loved ones. Kendall continues to gather and curate stories of what it means to be LGBT and Mormon in various venues including the ongoing partnership with the Utah Pride Center called Utah LGBTQ Stories as well as the upcoming documentary The Kitchen Case: Utah's Battle Over Same Sex Marriage.