I tune in now and then when I'm making coffee, but eventually turn it off because I'm disgusted by the buffoonery that passes for news and analysis. 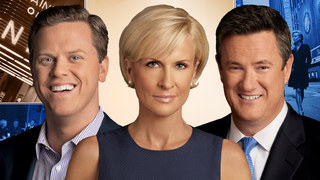 Donald Trump was being interviewed by phone. He did what you would expect: He heavily salted his vague comments with rampant self-regard. He used the word "great" as often as he could. He bashed Hillary Clinton and Bernie Sanders.

Over all, he sounded like he always does to me, a fellow native New Yorker: like an grousing cab driver or a braggart at the end of a bar on the way to a drunken stupor.

Is it a pose? Maybe, maybe not. 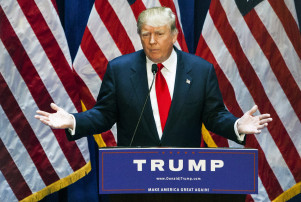 But Joe and the reporters around the table -- including someone from the Washington Post -- let him ramble without ever pressing him to explain or be specific.

Best example: What was his policy on climate change? Trump's slumgullion of a response included repeated statements that we send all our coal to China because we can't burn coal here; he had gotten many awards for his environmentally clean factories; we had to be tough with China (and Vietnam); the environmentalists probably didn't like him but that's okay.

When it was gently pointed out that he was talking about the environment, the same mess was spewed back at them, while Mika Brzezinski smirked. She does that a lot. I guess I would, too, if I were paid $2,000,000 a year and didn't do my homework.

I couldn't watch much more at that point because laziness is the Morning Joe style though they act as if they're sharp. They don't really press anyone hard, which is cowardly and shameful. Are they really afraid guests will refuse to come back on the show if they ask probing questions?

And do they honestly believe Donald Trump could resist the chance to bloviate for any audience anywhere? He feuded with Fox and then did an about-face.

Salon recently summed the show up this way, and got it just right:

"Morning Joe" is the perfect representation of so much that is wrong in our media world. Most TV shows at least pretend like they're speaking to Jane Public out there, but "Morning Joe" openly gloats about its insularity and elitism. It is explicit in its disdain for the world beyond the establishment. It treats sneering arrogance as a positive thing. It has never met a billionaire CEO it couldn't venerate or a warmongering pundit it couldn't toast.

The US actually gets 34% of its power from coal, so what Trump said was dead wrong. According to the Washington Post, "Coal is the chief source of electricity in 22 states and creates a majority of the electrical power in 14 states." I wouldn't expect the Morning Joe team to know exact percentages, but even I knew that coal is used across the country--why didn't they at least call him on that?