There's an ad in The New Yorker for Morning Joe featuring Mika Brzezinski and Joe Scarborough titled The Firebrands.

It reads in part:

"They are the bold, the fearless. They are the firebrands: the disrupters who speak the truth and hold the powerful accountable...through fierce debate and intelligent conversation, they thrust us into the middle of a political and cultural zeigeist."

As Hemingway wrote in The Sun Also Rises: "Isn't it pretty to think so?"

MSNBC couldn't have picked worse representatives for Firebrand branding. Both Mika and Joe are notorious for their coziness with Donald Trump.

And Trump loves his little acolytes, as reported in Rolling Stone:

"I watched your show this morning. You have me almost as a legendary figure, I like that." 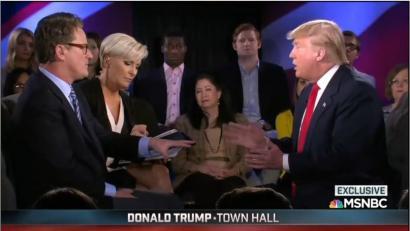 The depth of Scarborough's dishonesty on MSNBC is obvious, and he's even talked in an interview about giving campaign advice to Trumpo. He had the vestigial shame or decency to joke that he hoped there weren't any reporters present when he revealed how much of a Trumpista he is.

They're supposedly feuding now, but who knows how long it'll last? Anyone who's got that kind of history is unlikely to let go of the advantages he must believe it grants him.

If MSNBC really wanted a firebrand in its ad, someone who truly isn't enmeshed with the powerful, Rachel Maddow would have made a much better choice.

Lev Raphael's books from mystery to memoir can be found on Amazon.