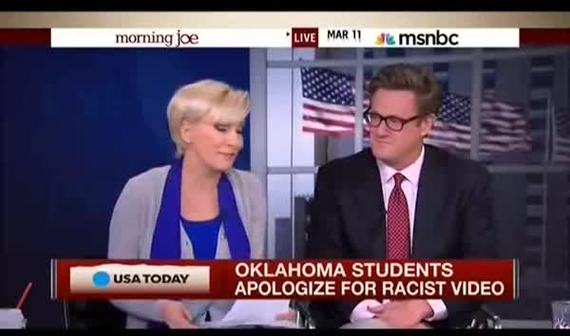 Morning Joe's response to the University of Oklahoma fraternity's racist chant was outright cowardly. They went viral -- and for all the wrong reasons. The unfortunate part of this debacle is that Morning Joe anchors Mika Brezinski and Joe Scarborough brought up a topic that is worth a conversation. However, they did this in the most ignorant way possible.

Not to go completely intellectual on you, America, but "to understand all is to forgive all," to quote a famous French proverb and Tolstoy's War and Peace. That to me is the greatest flaw in these two news anchors' thought process. Whether you are for or against the use of the "N" word, the current social position is that it is a word that may be used by people of color (though rappers use it excessively) but not by old, white fraternity house moms, and certainly not by frat boys.

It is irrelevant how many times Trinidad James repeats the "N" word in "All Gold Everything." This logic that blames Waka Flocka Flame for racism is the same logic that blamed the Columbine shootings on Marilyn Manson. It was not his fault. This is a societal issue that needs to be faced head-on, not by playing a media game of hide and seek.

I say shame on you, Mika Brezinski and Joe Scarborough, for furthering flawed logic and being unwilling to apologize or have a real conversation on the topic. On the other hand, I applaud the University of Oklahoma for their straightforward and speedy response to these misguided young adults. I grew up in the South (though South Florida is not the "true" South), and this "under the mattress" racism never ceases to shock me. My hope is that at least a few of these students will learn to change their behavior and continue their education, following a different set of values and ideals. And it looks like it might be working; today two of the SAE brothers apologized. Maybe they have learned from their mistake, but maybe not. As I return to Washington, D.C., from the anniversary of the Selma march, I continue, with hope, energy, and enthusiasm, to work toward creating the America that Dr. King envisioned and heroes like Bayard Rustin fought for.