Morris the cat is running for mayor of Xalapa, the capital city of Veracruz, Mexico -- and his pawlicies are gaining traction among locals. The pussy politician promises "Xalapa Without Rats" and guarantees that he'll lounge around and do nothing all day, MSN reports.

It's a platform that might seem catastrophic, but an iReport on CNN points out that a "lack of belief" in local candidates has boosted Morris' approval ratings. His Facebook page reportedly has more likes -- 50,907 at press time -- than three of the other four contenders for the spot.

He also admits that he's likely to make a mess in office. But at least he'll cover it up rather than leaving it around for others to clean up. 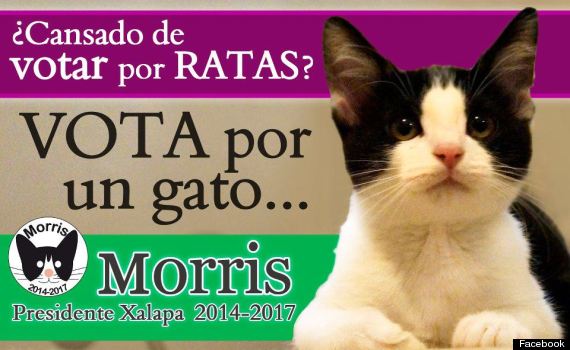 Morris hopes to make kitty litter out of the other candidates by the July 7 election day. He has a weakness for "quilts, sheets, pillows, couches, and clothing in general," Metro reports.

Morris The Cat For Mayor: Xalapa, Mexico Candidate Promises To Sleep And Do Nothing
Animals In The News