By Tom Perry and Marwa Awad

CAIRO, Nov 26 (Reuters) - Egypt's ruling Islamists tried to defuse a political crisis on Monday, with President Mohamed Mursi backing a compromise over his seizure of extended powers and his Muslim Brotherhood calling off a planned demonstration.

Mursi provoked outrage last week that led to violent protests when he issued a decree that put beyond judicial review any decision he takes until a new parliament is elected, drawing charges he had given himself the powers of a modern-day pharaoh.

Opponents plan to go ahead with a big demonstration on Tuesday to demand he scrap the decree, threatening more turmoil for a nation that has been stumbling towards democracy for almost two years since president Hosni Mubarak was ousted.

However, the Brotherhood, which was behind Mursi's election win in June, said it had called off a rival protest also planned for Tuesday in Cairo. Violence has flared when both sides turned out in the past.

Mursi's opponents have accused him of behaving like a dictator and the West has voiced its concern, worried by more turbulence in a country that has a peace treaty with Israel and lies at the heart of the Arab Spring.

Mursi held crisis talks with members of the Supreme Judicial Council, the nation's highest judicial body, to resolve the crisis over the decree that was seen as targetting in part a legal establishment still largely unreformed from Mubarak's era.

The council had proposed he limit the scope of decisions that would be immune from judicial review to "sovereign matters", language the presidential spokesman said Mursi backed.

"The president said he had the utmost respect for the judicial authority and its members," spokesman Yasser Ali told reporters in announcing the agreement.

After reading out the statement outlining what was agreed with judges, Ali told Reuers: "The statement I read is an indication that the issue is resolved."

Protesters camped out in Cairo's Tahrir Square since Friday to demand that the decree be scrapped said the president had not done enough to defuse the row. "We reject the constitutional declaration (decree) and it must be completely cancelled," said Sherif Qotb, 37, protesting amongst tents erected in the square.

Mursi's administration has defended his decree as an effort to speed up reforms and complete a democratic transformation. Leftists, liberals, socialists and others say it has exposed the autocratic impulses of a man once jailed by Mubarak.

Mona Amer, spokesman for the opposition movement Popular Current, said Tuesday's protest would go on. "We asked for the cancellation of the decree and that did not happen," she said.

Protesters are worried that the Muslim Brotherhood aims to dominate the post-Mubarak era after winning the first democratic parliamentary and presidential elections this year.

The crisis has exposed a rift between Islamists and their opponents. One person has been killed and about 370 injured in violence since Mursi issued Thursday's decree, emboldened by international praise for brokering an end to eight days of violence between Israel and Hamas in Gaza.

Before the president's announcement, leftist politician Hamdeen Sabahy said protests would continue until the decree was scrapped and said Tahrir would be a model of an "Egypt that will not accept a new dictator because it brought down the old one".

As well as shielding his decisions from judicial review, Mursi's decree protected an Islamist-dominated assembly drawing up a new constitution from legal challenge. Liberals and others say their voices are being ignored in that assembly, and many have walked out.

Only once a constitution is written can a new parliamentary election be held. Until then, legislative and executive power remains in Mursi's hands.

Though both Islamists and their opponents broadly agree that the judiciary needs reform, his rivals oppose Mursi's methods.

The Supreme Constitutional Court was responsible for declaring the Islamist-dominated parliament void, leading to its dissolution this year. One presidential source said Mursi was looking for ways to reach a deal to restructure that court.

"The president and the Supreme Judicial Council confirmed their desire for no conflict or difference between the judicial and presidential authorities," spokesman Ali said.

The council had sought to defuse anger in the judiciary by urging some judges and others who had gone on strike to return to work and by proposing the idea that only decisions on "sovereign matters" be immune from legal challenge.

Legal experts said "sovereign matters" could be confined to issues such as declaring war or calling elections that are already beyond legal review. But they said Egypt's legal system had sometimes used the term more broadly, suggesting that the wording leaves wide room for interpretation.

A group of lawyers and activists has also already challenged Mursi's decree in an administrative court, which said it would hold its first hearing on Dec. 4. Other decisions by Mursi have faced similar legal challenges brought to court by opponents.

Mursi's office repeated assurances that the steps would be temporary, and said he wanted dialogue with political groups to find "common ground" over what should go into the constitution.

The president's calls for dialogue have been rejected by members of the National Salvation Front, a new opposition coalition of liberals, leftists and other politicians and parties, who until Mursi's decree had been a fractious bunch struggling to unite.

The military has stayed out of the crisis after leading Egypt through a messy 16-month transition to a presidential election in June. Analysts say Mursi neutralised the army when he sacked top generals in August, appointing a new generation who now owe their advancement to the Islamist president.

Though the military still wields influence through business interests and a security role, it is out of frontline politics. (Writing by Edmund Blair, Additional reporting by Yasmine Saleh; editing by David Stamp) 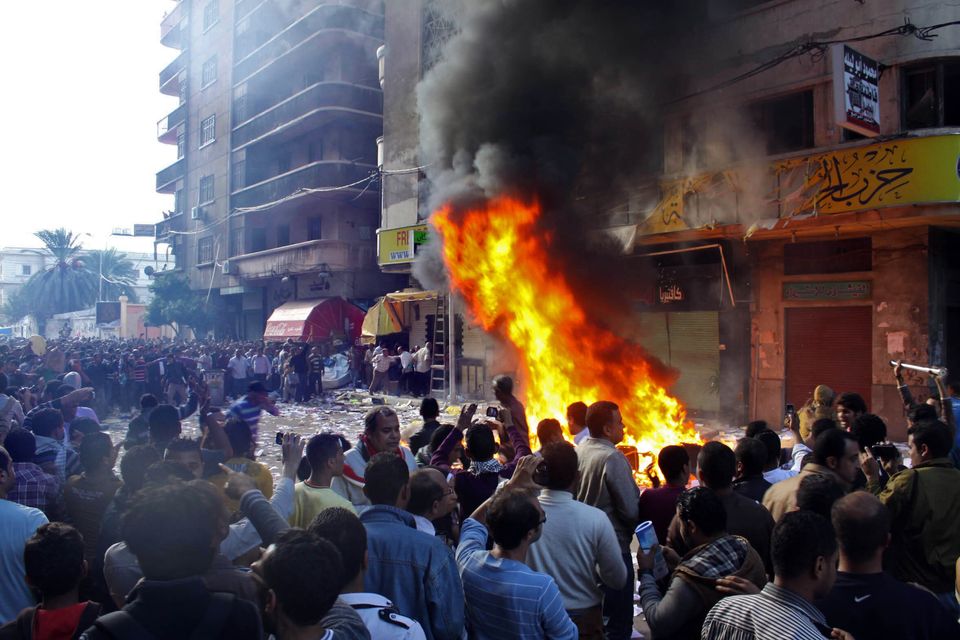