It's only January and 2015 isn't looking good for Johnny Depp. His latest comedy, "Mortdecai," has been called possibly the worst movie of 2015, and now it's the actor's biggest flop in years.

The comedy, which cost $60 million to make, was expected to gross around $10 million this weekend, but has earned a mere $4.1 million since its release on Friday. (Clint Eastwood's "American Sniper" dominated the box office again, earning $64.4 million this weekend.) That makes the film Depp's worst wide release opening since 1999's "The Astronaut's Wife."

But that's not all. "Mortdecai," which currently has a 12-percent rating on Rotten Tomatoes, is also Depp's worst opening for a film debuting on more than 2,500 screens. To put that into perspective, "The Rum Diary," "Blow" and "The Ninth Gate" all opened on fewer screens than "Mortdecai" and still had higher debut frames.

Depp has gone from big box office attraction to major flop over the last several years. The actor's biggest opening weekend ever was with 2006's "Pirates of the Caribbean: Dead Man's Chest," which earned $135.6 million. But it was after the fourth "Pirates" installment, "Pirates of the Caribbean: On Stranger Tides," that things started going south for Depp. Here's a look at his box office decline since 2011: 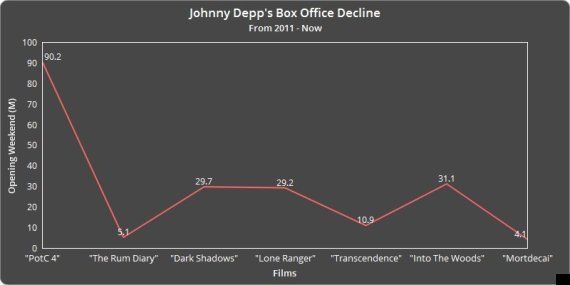