Sheriff Kyle L. Kirchmeier issued a press release two days ago saying, "The U.S. Army Corps of Engineers requested the Morton County Sheriff's Department to assist them in removing any trespassers who enter Corps land to the north of the main camp area."

This action resulted in a journalist Erin Schrode being shot with a rubber bullet and knocked to the ground. She accidentally filmed herself being shot while she was interviewing a water protector on the far side of the Cantapeta Creek. Schrode was nowhere near the protectors, who were standing in freezing water to protest the assembly of riot police on sacred lands; lands currently under protection by the Department of Justice from any further desecration.

In a moving statement on her Facebook page, Schrode describes the experience.

I was shot by militarized police WHILE interviewing a peaceful man at Standing Rock live on camera. I woke up this morning with the thought that I may have that very footage - and broke down in reliving the 40-second horror before my own eyes. Warning: it's very very difficult to watch and sent me into quivers and tears, even without the compounding historic trauma that Native Americans face.

The land is located east of ND Highway1806 and the Backwater Bridge at the confluence of the Cannonball River. The Sheriff wanted to stop access to sacred lands currently under Federal jurisdiction.

In addition to the journalist being shot, water protectors were sprayed with an unknown irritating white substance that turned their skin red and was extremely painful.

But did the USACE actually request help from Morton County?

In another one of Sheriff Kirchmeier's obfuscating manipulations of the spoken and written word, this is blatantly untrue. At the bottom of the press release, the truth struggles to the surface.

In an incomplete quote the Sheriff's office says this: "A statement from the U.S. Army Corps of Engineers gave Morton County law enforcement 'permission to go onto USACE land to prevent further campsites from developing and threatening public safety."'

Asking permission from the USACE is quite different than "The U.S. Army Corps of Engineers requested the Morton County Sheriff's Department to assist them in removing any trespassers who enter Corps land to the north of the main camp area."

The violent actions of Morton County were obviously not sanctioned by the USACE.

These photos are worth a thousand words. 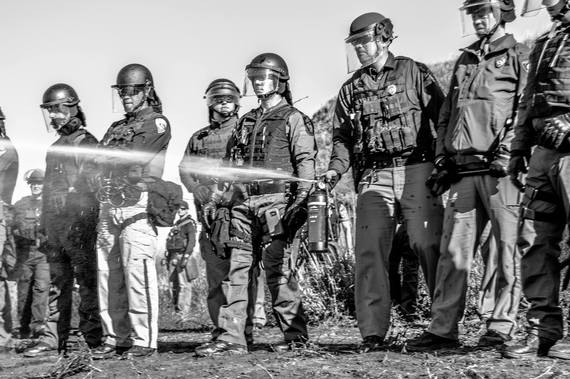 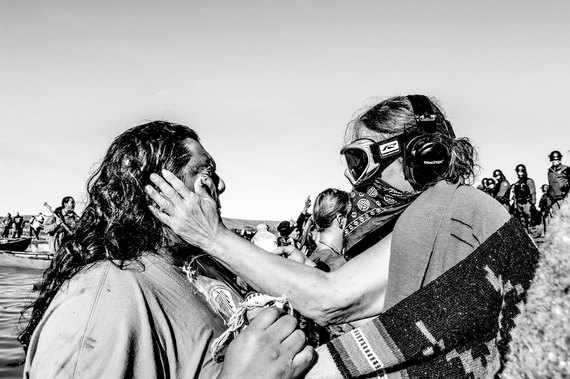 This attack on peaceful protestors happened a day after President Obama said that the USACE was looking into alternate routes for the Dakota Access Pipeline and that the Sioux Nation should "just see how things play out."

Things are not playing out very well Mr.President.