Passengers on the Moscow metro puffed and sweated for a free ride on Friday after Olympic officials unveiled a machine that issues a free ticket as a reward for performing 30 squats.

By setting the somewhat embarrassing challenge with a time limit of two minutes, the organisers said they were encouraging people to incorporate "Olympic values" into their commute.

After an impressive performance by Russian gymnastic champion Yelena Zamolodchikova, others stumbled onto the circle marked on the floor to try it out.

Some visibly struggled, throwing their arms in front of them for balance before a crowd of staring journalists and bystanders who counted down the squats before the machine spat out a ticket.

"It was hard at first but I managed it," said Lyudmila, a young woman who tried out the machine. "Two minutes is enough time."

The squat-operated ticket machine is installed at a metro station in western Moscow that is near a huge convention centre.

It is part of a campaign by Russia's Olympic Committee that picks projects proposed by the public to "add elements of sport into daily life."

The campaign aims to make Russians healthier so that they do not simply curl up on a couch to watch the events in the Winter Olympics that Russia hosts in Sochi next February.

Other projects include turning the hanging handles on buses into exercise bands and installing exercise bikes that produce electricity to charge cellphones. 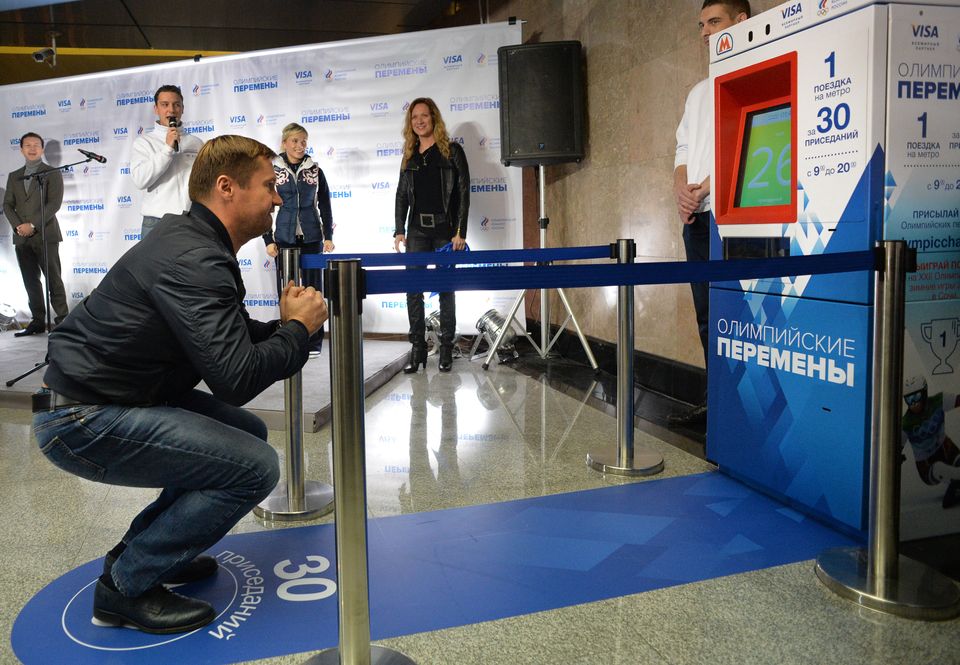 1 / 6
Olympic champion gymnast Alexei Nemov squats in front of a vending machine that sells the subway tickets for squats instead of money during the machine's presentation at the Vystavochaya metro station in western Moscow, on November 8, 2013. (YURI KADOBNOV/AFP/Getty Images)
Getty Images