It's not hard to recognize a Mose Tolliver painting. He communicates in a visual language all his own. The subject matter ranges from portrait to landscape to erotica with a lot in between, and yet his singular style -- flat, full frontal or straight profile, a muted palette, and did we mention flat? -- unites the motley content. The simplified yet foreign renderings read almost like unprocessed emoji from an alien planet, attempting to recreate life on Earth through symbols that appear slightly off, though undeniably magnetic.

Tolliver was born on the Fourth of July around the year 1920 near Montgomery, Alabama, one of seven boys and five girls. Growing up, the African American artist worked a variety of odd jobs -- he attended school until third grade -- including truck farming, gardening, plumbing and carpentry. He married his childhood friend Willie Mae Thomas and had thirteen children, two of whom died in infancy.

His life changed forever when, while sweeping up the delivery area of the McLendon Furniture Company, one of Tolliver's many part-time gigs, a half-ton crate of marble fell on him. Tolliver just barely survived; his left ankle was left crushed and both legs were damaged, leaving him unable to walk without assistance for the rest of his life. After a period battling depression and alcoholism, Tolliver turned to art as an outlet for his physical and emotional pain. 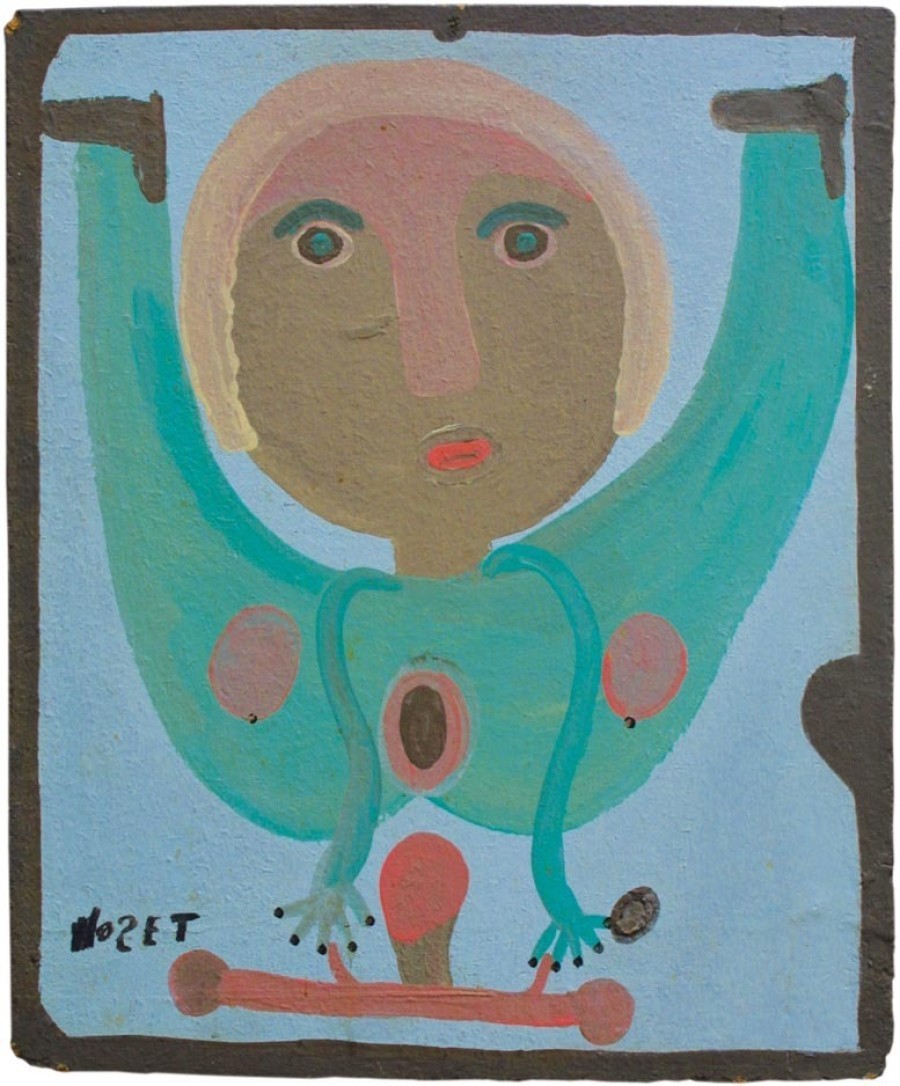 It is debated whether or not Tolliver created art prior to the accident. Marcia Weber Art Objects quotes Tolliver as saying: "I probably would never have painted if I hadn’t gotten hurt. I would still be working with plants and yards." However, the Encyclopedia of Alabama insists Tolliver was introduced to the world of painting prior to his accident, working mainly with tree roots that he then sculpted and painted.

Whether or not Tolliver had dabbled in painting before the wreck, it was the brother of his former employer at the furniture company, an artist named Raymond McLendon, who truly inspired Tolliver to pursue his craft. Although McLendon offered to pay for Tolliver to take art classes, the aspiring artist resolved to develop his own un-trained technique. He began selling works -- which he deemed finished when they sold -- in his front yard, most going for the bargain price of one or two dollars, or maybe a bag of rice. He signed his works "Mose T" -- with a backwards "s." They were painted with house paint on wood, furniture, Masonite, bottle caps, scraps, cardboard and whatever abandoned surfaces he could gather, and hung with dental floss or an aluminum pop-top hanger. Since he didn't wash out his brushes, many of the colors blurred together.

Just to jump ahead a little bit, Tolliver is now one of the most beloved folk artists in American history. His works sell for thousands and are featured in folk and outsider art exhibitions around the country. As Dr. Robert Bishop, Director of the Museum of American Folk Art, said: "You can hang him beside a Picasso, and you have the same kind of creativity and deep personal vision."

Much of this rise to fame is thanks to the 1982 exhibition "Black Folk Art in America 1930-1980," which showed at the Corcoran Gallery of Art and included artists like Bill Traylor and George White. "I didn't even know I was an artist till they told me," artist Elijah Pierce said in 1976, articulating the sentiment of so many of the previously unheard of artists on view. Surprisingly, Tolliver was not the only featured painter to turn to art after suffering a work-related injury. As a 1982 New York Times review of the show summarized: "It was the role of black folk art to make the unbearable bearable."

Aside from his physical disability, Tolliver was also dyslexic, leading him to experiment with turning his paintings upside-down, sideways and in between. His thorny relationship to language is also visible in his imaginative and unorthodox painting titles, like "Jick Jack Suzy Satisfying her own Self" and "Moose Lady On Her Exercise Rack." 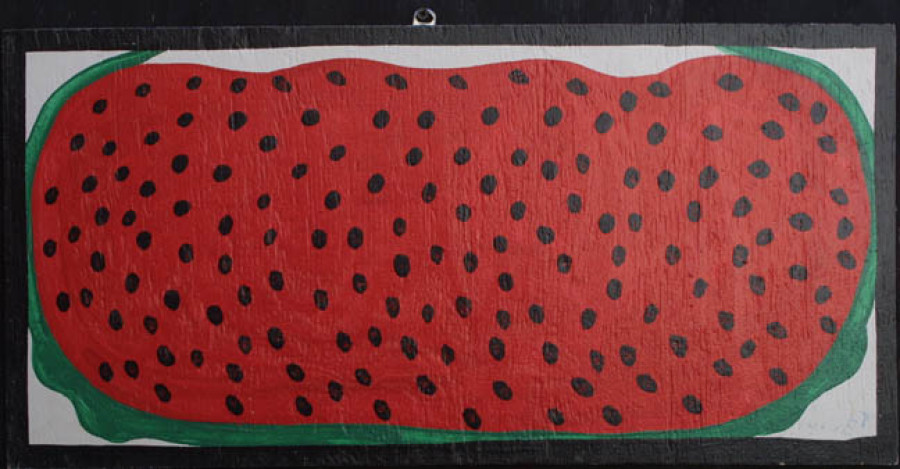 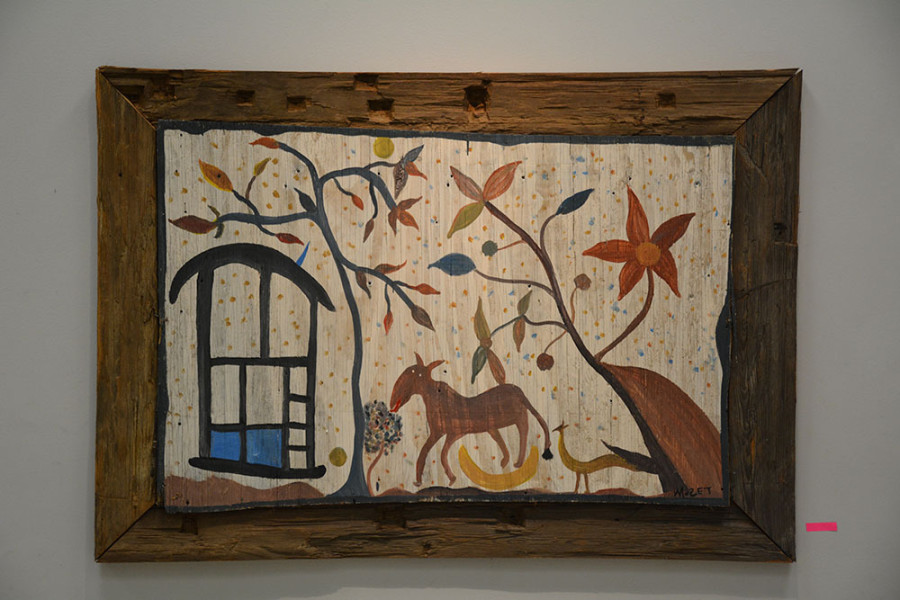 Outsider artists -- artists working outside and often without knowledge of the artistic institution -- are often praised for their raw talent, their innate urge to create and their authentic vision. It's not hard to see why Tolliver has risen to legendary heights in the realm of outsider art, with his simple-seeming yet utterly bizarre depictions of the small joys and pains of everyday life. Just like his titles, which turn classifying language into a sort of nonsensical jazz, Tolliver turns artistic representation into a game of humor and imagination. Somewhere between the visual equivalent of slang and poetry, Tolliver reinvents life's painful and banal fabric into something new, something alive.

Tolliver passed away in 2006 after a battle with pneumonia, at 86 years old. A posthumous exhibition entitled "MoseT Would See It: Expressions Through the Life of Moses Tolliver" will feature 90 of Tolliver's framed works from the 1970s until the time of his death, all from the collection of Dr. R. Douglas Hawkins. The show will run through May 8, 2015 at The Tennessee Valley Museum of Art. All images below provided courtesy of The Tennessee Valley Museum of Art.