British author Robert Louis Stevenson once said "To be what we are, and to become what we are capable of becoming, is the only end of life." For the Israeli painter Moshe Givati, who died at age 78 this past April, the "end of life," what he became and the fruits of his final intensive labors can be seen posthumously at the Jadite Galleries in Manhattan. His artwork is being showcased there until June 30, when it is transferred to a gallery in Los Angeles.

Givati's last few months could be characterized by the vibrantly colorful paintings he stayed up nights to create, each displaying symbolic images reflecting the inner workings of a troubled mind. The son of a manic depressive mother, Givati was prone to his own highs and lows and extremes. Back in the '80s, he suffered from both alcohol and drug addictions.

Looking forward to his June "comeback" exhibition, he told Jadite's art curator Deena Lusky earlier this year that "after 20 years, I am finally getting the chance to show my work." Perhaps, like Stevenson's quote, Givati felt he was becoming what he was capable of becoming after years of dodging opportunities. It was his intense fear of success that led him to run from it. In his final months however, Givati invested heart and soul, and ultimately, jeopardized his fragile health to perfect his final exhibition, a series of paintings that held personal symbolic significance to him and were based on his favorite play, "Equus." The play is about a psychiatrist's analysis of a boy who blinded six horses. The exhibition not only celebrates an abstract collection but serves as a reminder of a life extinguished in what was to be its wintry prime.

Lusky explains that Givati had made himself scarce for the last 20 years. "From the moment he was born, he had no roots," she says of his dysfunctional upbringing, "He was a wandering Jew at heart and not a happy one. He always tried to find the right equilibrium to manifest all the things that were going on inside of him." Like other talented manic depressives before him (though it is unclear if Givati was ever officially diagnosed), Givati's highs were very high. For Lusky, that was evident by the sleep and nourishment he forfeited to perfect the Equus collection in his final months.

"It wasn't that Moshe Givati didn't have chances along the way," Lusky explains, "but he was skeptical of many of them because his own success terrified him." To drown out the insecurities and avoid his own personal problems (he was married twice and had difficult relationships with four of his five children), he turned to drugs and alcohol and spent long periods as a recluse. His last show, prior to the current exhibition, was a retrospective of his work in 2006 at the Tel Aviv Museum, but it did not show the more recent work he was proud of.

"When most other opportunities came his way, he would run away," Lusky relates, "And his art was always valued as swaying between the meditative and expressive. He didn't use a color palate. He simply took his brush and stuck it into whatever color and smeared that onto canvas. He had open dialogue with the canvas; it was the only friend he really trusted that would absorb all his insecurities."

Whereas Givati refused to title his paintings or provide commentary, contending that is was up to his viewers to interpret, Lusky (who came know Givati well before he died) feels that the horses in his 45 painting Equus series represented the lust and deep longing for acceptance, the insecurities he lived with and his personal triumphs. For her, the series represents "the torture of the struggle of living here on earth." Lusky says that Givati was deeply spiritual but not unlike his pendulum swinging mood shifts and chaotic personal relationships, he had a love-hate relationship with his own religion. At one point while living in New York, he connected with the Chabad movement and became a baal teshuva, fully embracing his Jewish roots after living a secular lifestyle. However, at the time of his death, he was angry at God and for all intents and purposes considered himself an atheist.

During his religiously observant period however, Lusky says, "Yiddishkeit (a love of Judaism) and stories from the Torah and the midrash brought out his vitality. But then, when he returned to Israel from New York, his mother died and that was followed by the death of his best friend. He said, 'I don't want to know any God' and went back to his old ways." Revisiting his addictions from years before, Givati began drinking and abusing drugs. As a result, he eventually became homeless. It was at this point in time that one of the more prominent art collectors in Israel, Chaim Shiff, who had bought numerous Givati paintings, offered the artist room and board at hotels in Jerusalem and Tel Aviv in exchange for a monthly stipend affording him to paint. After Schiff passed away, his son Dov continued to support Givati for the rest of the painter's life. Givati would become known as a "hotel painter" to many in the art world, a difficult box to take himself out of which made the prospect of his June exhibition all the more significant to him.

"His relationship with God is so much a part of his art," says Lusky, explaining that Givati had a series of paintings about the sacrifice of Isaac and another in which Joseph's coat of many colors is displayed. "If you asked him, he wouldn't say a word but you see that it's a search into his spirituality." Lusky tells a story of how she visited Givati in the hospital during his final days and he tersely did not want her to mention Hashem, a Hebrew term for God. He also made it clear to the son who arranged his funeral that a secular burial was to take place and no kaddish (the mourner's prayer) would be said. Even on his deathbed, Lusky says, "Moshe Givati always went to the extreme."

For Givati, emotion and being overly emotional is what fueled his most passionate works of art. As American literary critic George E. Woodberry once wrote: "By passion, the artist enters into life more than other men. That is his gift -- the power to live. Emotion is the condition of their existence; passion is the element of their being." Givati's vitality and intensity is evident in the works he left behind. He was connected to Israel and passionate about the country's politics. One of his untitled paintings was created fervently the night Gilad Shalit was released from captivity. Lusky says that Givati frequently spoke about "the torture and the conflict." He didn't necessarily give his political opinion, but through his art, he displayed how he viewed political and social issues.

Although he was notoriously difficult to work with in the art world, his self-taught technique and raw talent were something that no art connoisseur could overlook. For Givati, the play "Equus" raised questions about maturity, and his current exhibition amplifies the questions he had regarding his own maturation, what it means to be a mature man in general and who he was in his own eyes.

Sadly, no one can interview Moshe Givati and ask him who he thinks he was in his own eyes. But like his untitled and unexplained paintings, he has left that to us to decide. 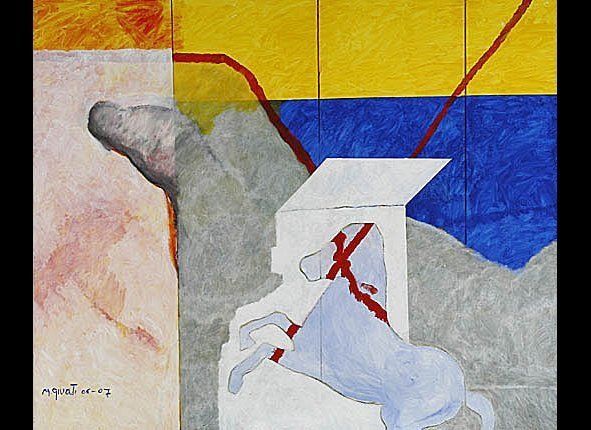