When mosquito season rolls around, people light citronella candles, slather themselves with repellant and cover up as much skin as possible to protect against annoying, painful bites. While those tactics can help somewhat, the truth is that your genes determine whether or not mosquitoes are attracted to you, according to a recent study published in the scientific journal PLOS One.

If the finding is replicated in larger trials, then teasing out the genetic factors that determine mosquito attractiveness could one day lead to a more effective way to repel the flies, said senior author Dr. James Logan in a press release.

"If we understand the genetic basis for variation between individuals, it could be possible to develop bespoke ways to control mosquitoes better, and develop new ways to repel them,” he said. "In the future, we may even be able to take a pill which will enhance the production of natural repellents by the body and ultimately replace skin lotions." 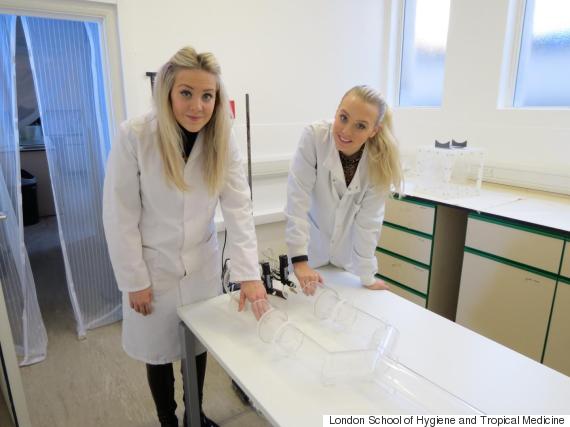 At the London School of Hygiene and Tropical Medicine, identical twins place their hands in a Y-shaped tube filled with mosquitoes to see how attractive they smell.

To test whether mosquitoes would be more or less attracted to certain twins, each study participant was paired up with their sibling and instructed to place one hand in the forks of a Y-shaped tube. Then researchers then released mosquitoes into the middle tube to see how many insects would fly to one hand versus another.

The experiment on 18 identical twin pairs and 19 non-identical twin pairs revealed that genes play a role in mosquito-attractiveness at a level comparable to how genes play a role in inherited height or IQ. Because it’s already known that mosquitoes are attracted to certain body odors, the researchers hypothesize that the genes that control body odor are the ones playing a role in mosquito attractiveness.

Intuitively, people who attract all the bites during a summer BBQ party when no one else does may already know that they are especially tantalizing to mosquitoes, and that they need to take more precaution than others to avoid itchy welts. But figuring out the best way to repel mosquitoes is about more than just keeping your bare legs bite-free during summer months.

Mosquito-borne diseases like malaria and dengue affect millions around the globe. The faster we can get to controlling mosquito bites, the faster we can put an end to deaths and disfigurement caused by these diseases. Indeed, for the twin experiment, researchers used a type of mosquito called Aedes aegypti, which is notoriously difficult to control or eliminate and is known for its ability to transmit dengue, yellow fever and other diseases to human beings.

The best way to protect against mosquito bites is to use insect repellant on skin and clothes, cover up more skin and avoid being outside during high-mosquito times (from dusk to dawn), according to the Centers for Disease Control and Prevention. Scientific trials have shown that anecdotal strategies such as consuming lots of garlic and vitamin B are not effective at repelling mosquitoes.

CORRECTION: This article was updated to remove reference of the word "beer" as a proposed way to repel mosquitoes. Drinking beer actually increases attractiveness to mosquitoes. We regret the error.