Pure incremental and breakthrough innovation is unsustainable so how does one balance managements' risk-attitude with users' taste preferences when designing innovative offerings?

In the 1930's, Raymond Loewy, the father of American design, advocated MAYA -- Most Advanced, Yet Acceptable, as a canon for industrial design. The bell-shaped model for customer acceptance showed that if design expressions / styling / aesthetics exceeded beyond a certain point on the curve, customers would become alienated causing sales and profit to plummet.

A paradigm shift is only profitable if the lead-time for acceptance is reasonable since, for management and users alike, embracing new ideas takes time. As an example, abstract art has been with us for over a century, yet only twenty percent of people in the UK appreciate this art form today. So one is still better off painting bright colored landscapes, flowers, nudes and marine pictures than exploring new expressions. 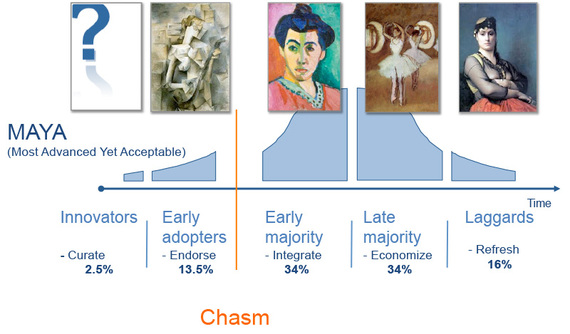 A study at Stanford Center for Design Research in 2005 revealed a one to two year adoption delay for highly innovative consumer products. The urban legend, at that time, was that winning an IDEA (Industrial Design Excellence Award) Bronze was a sign of success, while receiving the IDEA Gold Award was the kiss of death.

By observing Gold, Silver and bronze winners the years following the announcement, however, a different story appeared. IDEA Bronze winners were found to have success right away, while IDEA Gold winners, on average enjoyed success a couple of years further down the road.

Both the BMW Mini and the Chevrolet Super Sport Roadster happened to be "retro" designs, the popular style of that period. When one has a new unique product, it is probably best to play it safe when it comes to exterior styling and what is safe may differ between cultures.

Analyzing European, North American and Asians response to IDEA winners from the previous year showed that Europeans, North Americans as well as Asians were attracted to geometric and easily identifiable products, however Asians were also drawn to more sculptural products.

As the adage goes, if one develops a product that does not work, there may be a second chance offered but if one develop a product for which there is no market, one will be looking for a new job. With such an incentives in place, is it any wonder that business and design managers continue to play it safe?