This past weekend my husband, Dan danced at our friend's daughter's wedding. Well, if you consider swaying from side to side dancing, then it qualifies. While it may not seem so remarkable, the fact that Dan wiggled on a dance floor is amazing and wonderful! 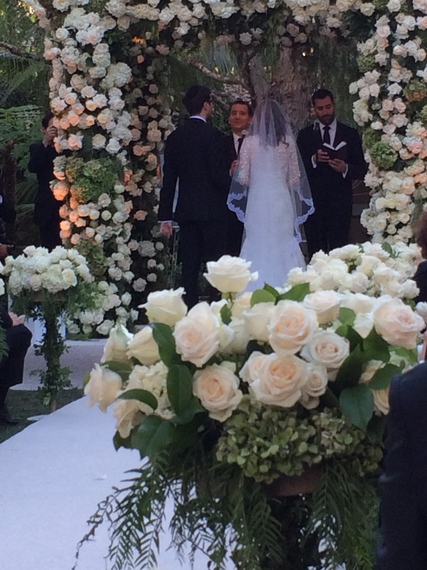 It was just five years ago that his life took a cruel turn and he suffered a devastating stroke. He couldn't walk, talk or eat. He had a feeding tube in his stomach, and we were told he was "gravely" ill. The stroke had affected his brain stem where bodily functions were regulated, paralyzed the optic nerve and traveled beyond. He received tPA -- tissue plasminogen activator -- in the hours following the stroke, a sometimes lifesaving clot busting treatment, but after a brief period of lucidity, he lapsed back into oblivion.

Dan was at Cedars Sinai Hospital for two months. He suffered a series of serous issues and was transferred to 10 different rooms (ICU, cardiac step down, rehab, ICU, etc.). In each room I hung his biking uniforms and taped cards from well wishers to remind him of his life. Recovery did not occur in a straight line. He experienced progress and setbacks. He developed a painful urinary tract infection after pulling out the catheter, twice. He had an abdominal bleed and needed a transfusion of nine units of blood and plasma and a duodenum repair. One day they called a "red alert" as he had a ventricular tachycardia and he had to be electro-shocked back to a normal rhythm. The stroke affected his ability to walk with weakness on his right side, so they hung him from an overhead unit that held him up while he slowly walked on a treadmill. They tried to coax language back with speech therapy. He finally regained the ability to swallow and after two months at Cedars he was able to leave the hospital.

Rehab continued at home. His progress was slow as he learned to walk, talk and think again. He progressed from using an industrial size walker to help him walk a few steps, to a cane, to being able to walk without an adaptive device. Because of his double vision and weakness on one side, he still doesn't walk well, but he manages. Even now, five years after his stroke, his daily activities consist of therapies -- physical therapists, trainers, piano lessons, language lessons, sewing lessons, yoga, and all sorts of classes and support groups to continue to stimulate his mind.

During Dan's two months in the hospital I was supported by a cadre of people who helped transport me to and from Cedars, left food and messages for me, visited us and even donated blood to replace what we had used. The kindness and selfless help that I received from those special individuals was immeasurable. Their acceptance and support extended to the period of time when Dan returned home and still had multiple physical and cognitive issues. It was so wonderful to be invited to holiday dinners, a night out and even a cultural event. It made us feel accepted and part of a social world -- even if Dan had changed. We will forever be grateful to those who embraced us in this way. The bride's mother, Barbara was one of those individuals.

So it was with delight that we were invited and able to share this joyous event, the wedding of our dear friend's daughter. It was a beautiful affair and everything was elegant, and filled with love and tradition. At one point Dan indicated that he wanted to dance. As we edged closer to the dance floor all I could think about was the magnitude of the moment. Where we were five years ago and how far we had come. We joined the crowd and danced along the rim of the dance floor. As he swayed, Dan had a huge smile on his face. It was the most wonderful dance we ever had!