10 Countries with Largest Number of Catholics

A recent analytical report by Pew Research Center, "The Global Catholic Population," indicates the countries with the highest Catholic population today, and how the global face of Catholicism has changed in the last century.

With close to 127 million Catholics, Brazil has more Catholics than any other country, and 11.7 percent of the world's Catholic population. Brazil is followed by Mexico (96 million), Philippines (76 million), United States (75 million), Italy (49 million), Colombia (38 million), France (38 million), Poland (35 million), Spain (35 million) and Democratic Republic of the Congo (31 million). Together, these 10 countries account for 55.6 percent of the Catholic population worldwide. For some perspective, Brazil alone has more Catholics than Italy, France and Poland, the top three European countries on the list, combined. 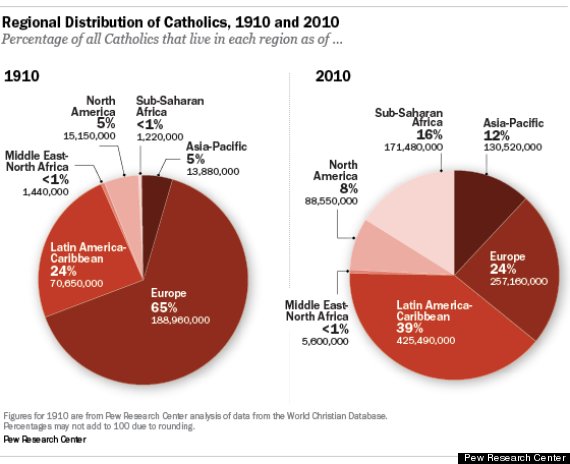 As the chart above shows, in 1910, 65 percent of the world's Catholics lived in Europe; European Catholics constituted a clear majority in world Catholic population. Over the last 100 years, there has been rapid growth in Catholic population in Sub-Saharan African and Asia-Pacific regions. The growth in North America and Latin America-Caribbean regions has been slower, while Europe's share has decreased sharply (from 65 percent to 24 percent) and there has been negligible change in Middle East and North Africa. As the Pew Research Center analysis notes, this change is partially affected by rates of overall population growth, which has for instance, decreased significantly in Europe, but increased in Latin America and the Caribbean. 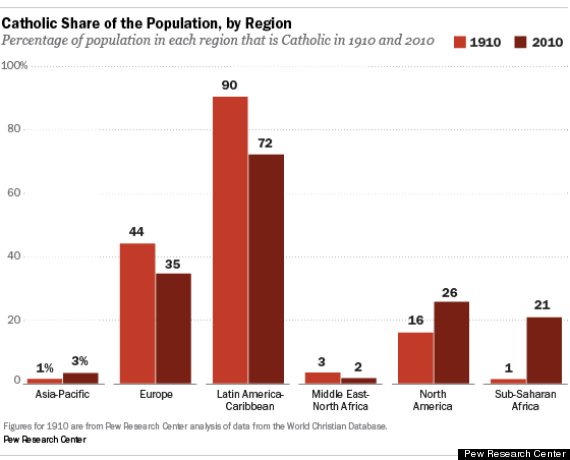 Examining the Catholic share of the population in each geographic region in 1910 and 2010 affirms earlier conclusions. There is dramatic growth in Sub-Saharan Africa, and slow but steady growth in Asia-Pacific and North America. Interestingly, the percentage of Catholics in Latin America-Caribbean region decreases from 90 percent to 72 percent of the population, even as the region overtakes Europe as the most Catholic with approximately 426 million Catholics compared to Europe's 257 million.

For a more comprehensive take on how the world Catholic population has changed in the past century, check out Pew Research Center's report.

Most and Least Religious Countries