A new poll found that over half of Americans think Chicago is more dangerous than any other large U.S. city. But their perception does not match the reality of the Windy City's crime rate, which is actually falling.

The YouGov poll, published last week, found that Chicago is the only city that a majority of respondents believe to be unsafe, with 53 percent identifying it as dangerous. The next most dangerous major cities, according to respondents, are New York City, Los Angeles, D.C. and Miami. 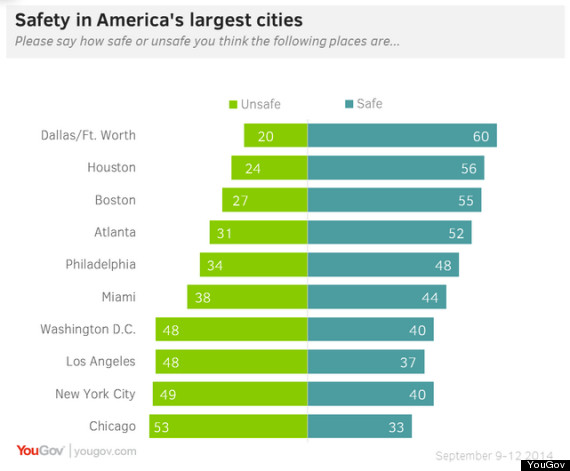 The opinion poll's findings, which include only the nation's 10 largest cities, conflict with other recent rankings of dangerous U.S. cities. In Forbes' 2013 ranking, based on FBI data, Atlanta came in as the most dangerous of the 10 cities included in the YouGov poll. Detroit, which is not a part of the YouGov poll, ranked first overall on the Forbes list.

The YouGov poll also contradicts overall crime trends in Chicago. Through the end of August, police say the murders in Chicago were down 7 percent, though shooting incidents were up 5 percent. The Chicago Police Department has previously noted that the city's homicide rate is at its lowest point in 50 years.

The Pew Research Center has also pushed back against Chicago's "murder capital" reputation, pointing out in a July analysis that Chicago actually had the nation's 21st-highest murder rate in 2012, the most recent year for which the FBI has released official data. Six other cities -- Richmond, Virginia; Birmingham, Alabama; Flint, Michigan; Detroit; New Orleans and D.C. -- have at some point since 1985 been home to the nation's highest homicide rate.

Still, violent crime continues to disproportionately impact areas of Chicago's south and west sides. Over the most recent weekend, three people were fatally shot and at least 30 were wounded in shootings, according to DNAinfo Chicago. The fatalities occurred in the city's Englewood, East Garfield Park and West Garfield Park neighborhoods.

The YouGov poll also found that most Americans don't recognize that today the national murder crime rate is half what it was 20 years ago and that respondents' perceptions of how safe or unsafe a city is have little to do with whether they've actually been to the city.