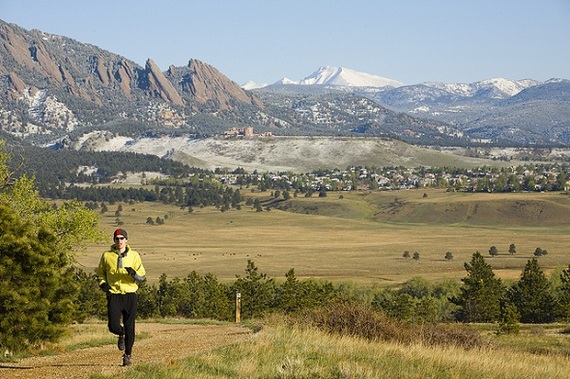 Summer is almost here and with it, many people are looking to get in better shape.

At SmartAsset, we're all about helping people meet their biggest goals (like retirement and homeownership). That's why we wanted to find the cities that make getting in shape easiest. These are the places with an abundance of personal trainers and fitness coaches, with plenty of yoga studios and climbing walls and lacking in the calorific temptations that can throw a great fitness plan off course.

To find the best places to get in shape we collected data on over 360 of the largest metropolitan areas in the country. Specifically, we looked at three separate categories of data that affect fitness.

We ranked each one of the 369 metro areas in our study according to these three factors. We then scored each city based on its average ranking: A city ranked first in all three categories (highest in people and places and lowest in fast food) would score a perfect 100, while a city ranked last would score a zero. The results, below, are the most fitness-friendly cities in America. 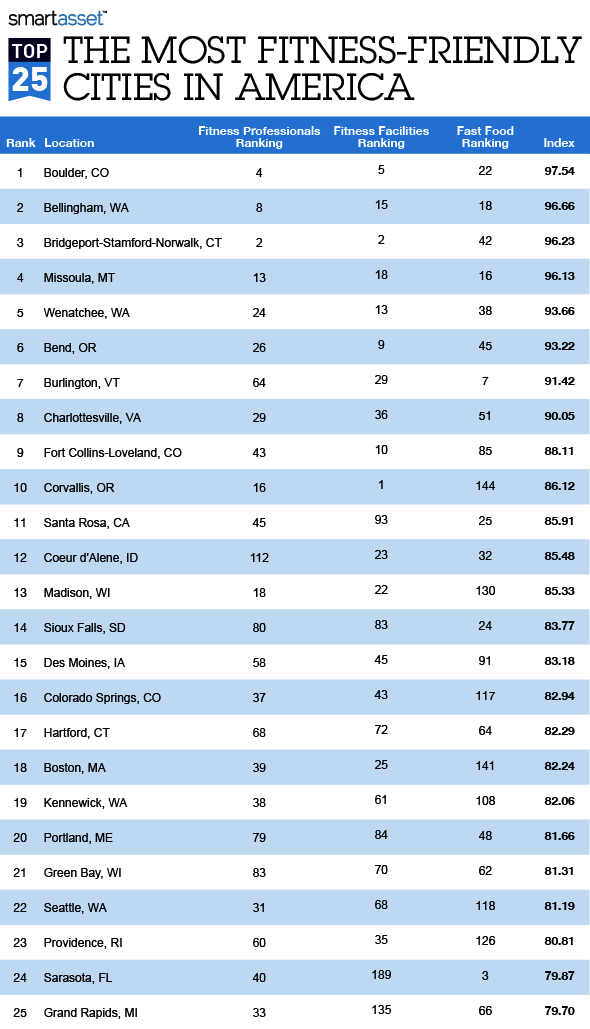 On the doorstep of the Rockies, Boulder offers the type of year-round opportunities for recreation that not only make getting in shape easy, but also fun! Throughout the spring, summer and fall, there's plenty of nearby trails and mountains to take care of all your rock climbing, hiking and trail-running needs. Come wintertime, some of the best skiing in the world is just a few hours away.

Not the outdoorsy type? Boulder still has you covered. There are 59 fitness and recreational sports centers in town, and some 630 professional fitness trainers and aerobics instructors. Add to that the high altitude, which make burning calories that much easier, and there's no doubt about it: Boulder is America's most fitness-friendly city.

Located on the Puget Sound, just west of the Cascade Mountains, Bellingham offers easy access to great kayaking, canoeing, mountain climbing, skiing and cycling. In fact, once a year, fitness-minded people from across the country gather in Washington state's Whatcom county for the annual Ski-to-Sea race and festival, a multi-leg team relay that begins on the snowy slopes of Mount Baker and ends in Bellingham Bay. Competitors ski, cycle, run, paddle and mountain-bike their way toward the finish line over the course of three to eight grueling hours.

If that sounds a little too extreme for you, Bellingham has plenty of other fitness options to keep you going. The Bellingham metro area ranked in the top 20 (out of 369) in all three of the categories we examined, and had the 8 highest ratio of fitness professionals to working population of any city in our study.

As one of just three metropolitan areas east of the Mississippi to crack the top ten, the Bridgeport-Stamford-Norwalk area is easily the most fitness-friendly metro on the East Coast. Ranking second both for its proportion of fitness professionals and for its concentration of fitness facilities, Bridgeport may have fared even better if not a marginally higher number of fast food joints. It ranked 42 overall in that category. Nonetheless, people living in the area should have plenty of opportunities to get or stay in shape in 2015.

At the confluence of the Clark Fork River, the Bitterroot River and the Blackfoot River, and surrounded by multiple mountain ranges (including the Rattlesnake Mountains and the Bitterroot Mountains), Missoula provides visitors and residents alike plenty of excuses to stay active. Along with activities like mountain biking and rock-climbing, the Missoula Valley has some of the best fly-fishing in the world: the area was immortalized in the 1976 fly-fishing novella "A River Runs Through It," which later became a feature film starring Brad Pitt.

Although our study did not consider the quality of local fly-fishing opportunities, Missoula rated in the top 20 of each of the three categories we did consider. It had the 13 highest fitness-professionals ratio, and the 16 lowest concentration of fast food restaurants.

Find out now: Is it better to buy or rent?

As the "Apple Capital of the World," the city of Wenatchee knows something about staying healthy. It's not an apple a day that keeps the doctor away in the Wenatchee Valley, however: It's the easy access to great fitness facilities! Wenatchee ranked 13 out of the 369 cities we examined for its concentration of recreational and sports-related employers. For those who love the outdoors, there are great options right in town. The trail that runs alongside the Columbia River from Wenatchee Confluence Park to Riverfront Park is perfect for walking, running and biking; and the scamper up Saddle Rock is not only great exercise but provides a beautiful view of the entire valley.

One of four Pacific Northwest cities to crack the top 10, Bend is known as a haven for outdoor sports enthusiasts. Bend sits east of the Cascade crest, which means it receives more annual sunshine than its rainier coastal neighbors; that leaves fewer excuses to stay inside on the couch. Bend has the highest metro-area concentration of sporting goods retailers of any city in America, with an incredible 42 stores servicing a metro area of about 150,000 people.

On the shores of Lake Champlain, Burlington has earned a "green" reputation. On the whole, residents in the Queen City prefer organic to processed, fresh to frozen, sustainable to wasteful, outdoors to indoors and local to anything else. Our study has done nothing to diminish that reputation. According to our research, Burlington has the 7 lowest concentration of fast-food restaurants of any metro area in America. That, combined with its easy access to two mountain ranges and one beautiful body of water, make it one of the most fitness-friendly cities in America.

Like several other of the country's most fitness-friendly cities, the Charlottesville metro area is home to a major university. Having a school like the University of Virginia in town means there are more jobs for fitness coaches, athletic trainers, lifeguards, dietitians, referees and other fitness professionals. While access to the university's recreational facilities is limited to students, faculty and alumni (along with direct family members of all three), there are plenty of other fitness options in the Charlottesville metro area. The area is home to 23 fitness and recreational sports centers, according to the U.S. Census Bureau.

With 280 miles of paved and unpaved trails in the city of Fort Collins alone, the exercise enthusiast should have no trouble finding a place to take a walk or go for a run. But that's just within town. The Fort Collins-Loveland metro area is miles away from the Colorado Front Range, the easternmost edge of the Rockies, where there's more than enough hiking, climbing, skiing and snowboarding to keep you active year round. That may explain why the area ranked 10 out of the 369 cities we examined for its concentration of fitness facilities.

With 15 fitness and recreation centers, 12 sporting goods stores and six businesses offering sports and recreational instruction, all to serve a metro area of just 85,000 people, Corvallis has the highest concentration of fitness facilities in the country. So if you're looking for a small community that makes living a healthy lifestyle easy, Corvallis may be the perfect place.