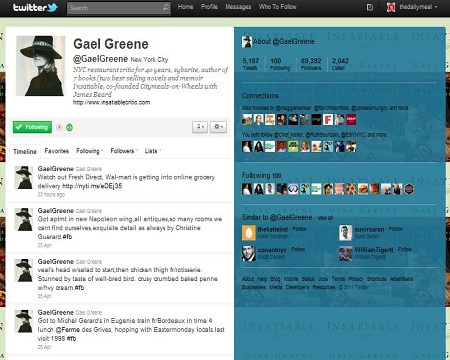 Food critics may prize anonymity when it comes to staying undercover while eating in restaurants, but when it comes to social media they're a lot less shy. No strangers to sharing opinions, these writers are fully equipped to deliver short, pithy commentary in 140 characters or less.

Like many popular chefs, quite a few critics have tried boosting their online profiles. Twitter serves as the perfect medium for communicating with an audience of Yelping, Chow-obsessed food lovers.

But who are the most followed critics on Twitter? For the purposes of this list we looked at active food critics, which includes individuals whose current job includes reviewing restaurants (sorry, Frank Bruni). Think of this as your ultimate guide to industry hotshots.

#10 Robert Sietsema: 5,069 Followers
Robert Sietsema, the critic for The Village Voice, is the tenth most popular food critic on Twitter. He has 5,069 followers and follows 126 people.
Handle: @robertsietsema

#8 Corby Kummer: 6,130 Followers
The restaurant critic for Boston Magazine (and senior editor for The Atlantic), Corby Kummer has 6,130 Twitter followers, but follows only 45 people in return.
Handle: @CKummer

#6 Jeffrey Steingarten: 7,304 Followers
Whether critiquing chefs as a judge on Iron Chef America or in his Vogue column, Jeffrey Steingarten is not known for being shy about sharing his opinion. Although he only follows nine people on Twitter at last count, he is followed by 7,304 people.
Handle: @jsteingarten

#3 Jonathan Gold: 18,850 Followers
Resident restaurant reviewer for LA Weekly, Jonathan Gold comes in third on this list. Gold trails both Gael Greene and Sam Sifton with a total of 18,850 followers, and has tweeted 1,699 times to date.
Handle: @thejgold

#2 Sam Sifton: 56,136 Followers
Being the food critic of The New York Times is a pretty high-profile job, which is why it's not surprising that Sam Sifton scored the number two spot on this list with 56,136 followers.
Handle: @SamSifton

Correction: As Alison Cook of the Houston Chronicle was kind enough to tweet (@alisoncook), her 6,434 followers at the publication of this correction (May 5, 2011) puts her in play on this list of most followed critics on Twitter. An updated list follows.