Think back to the best gift you ever received. Not the biggest, priciest or most elaborate, but the one that leaves your heart doing tiny backflips every time you think back to that split second you first laid eyes on it.

The most heartfelt gifts are the ones that truly take us by surprise. Thoughtful gifting doesn’t have to mean spending extra money or concocting an elaborate rendezvous. It’s actually the seemingly simple action of being in synch with the people you love that produces the most heartwarming gifts and gestures.

Get ready for your heart to grow three sizes, because we’ve partnered with eBay to bring you nine stories of truly inspired gifting, to prove that expressions of generosity and friendship come in all shapes and sizes. 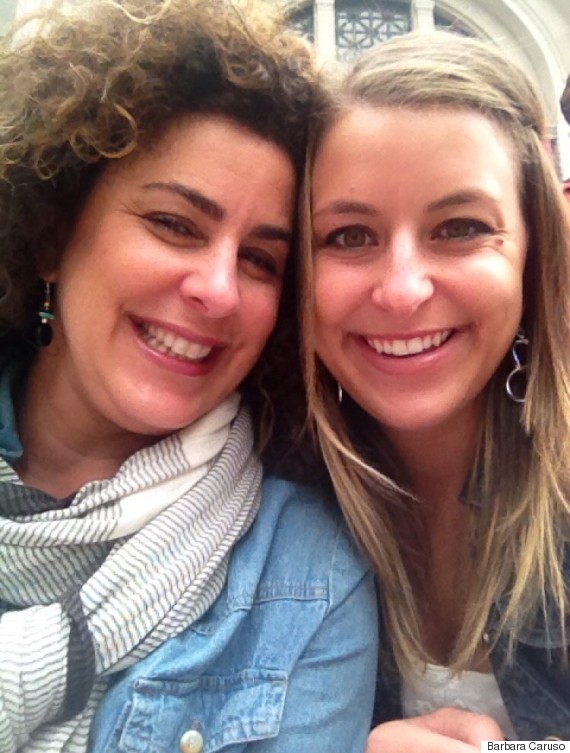 Image: Barbara and daughter Andrea Stange.
“I grew up the sixth of 10 children, and pretty much had hand-me-down everything​ or the very cheapest version of new possible. I play tennis and enjoy working out and had worn through nearly all my socks. I was used to this. My daughter knew … because she used to borrow them all the time, since it was much easier than doing laundry. For Christmas several years ago, she gave me eight dozen -- yes, eight dozen -- pairs of workout socks! All different styles and colors. … I cried. It was so decadent to use a new pair of socks for every tennis match or workout for a full year. It was the most thoughtful gift I could ever imagine.”
--Barbara Caruso

2. An unexpected, long-awaited doll of Mrs. Beasley from “Family Affair.” 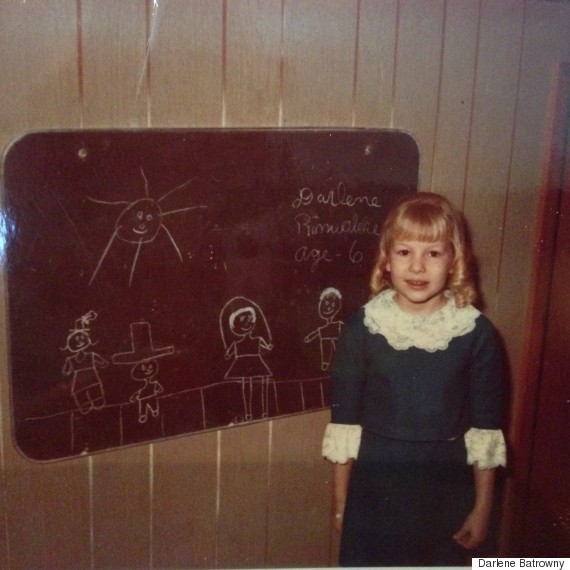 Image: Darlene at age 6, the year she received her doll.
“My most meaningful and memorable gift was a doll that I received unexpectedly from my father who was soon after severely brain damaged in an accident. That gift helped me through years of experiences I was too young to fully understand at the time. I was able to hug and receive comfort from that doll for years following his accident. She accompanied me through long hospital waits, scary unexpected experiences and very sleepy nights.

“At the time, my mother explained that I should wait until Christmas to get the doll I had been begging for, because she did not want to spoil me by giving me everything that I asked for. Then one sunny day, my father came home from work and asked me to go outside and get his tool kit from the back seat of his car. It didn't cross my 6-year-old mind that his tool kit was way too heavy for me to carry, I went running to the car and there on the back seat was my beautiful doll, inside a large box, covered with shiny cellophane and smiling up at me.

“When I look back, I realize that was the greatest gift a little girl could receive because it was given with love and helped me hold onto a piece of my father as I remembered him as I navigated through a very difficult experience in my life. It still makes me feel good today whenever I think about it.”
--Darlene Batrowny 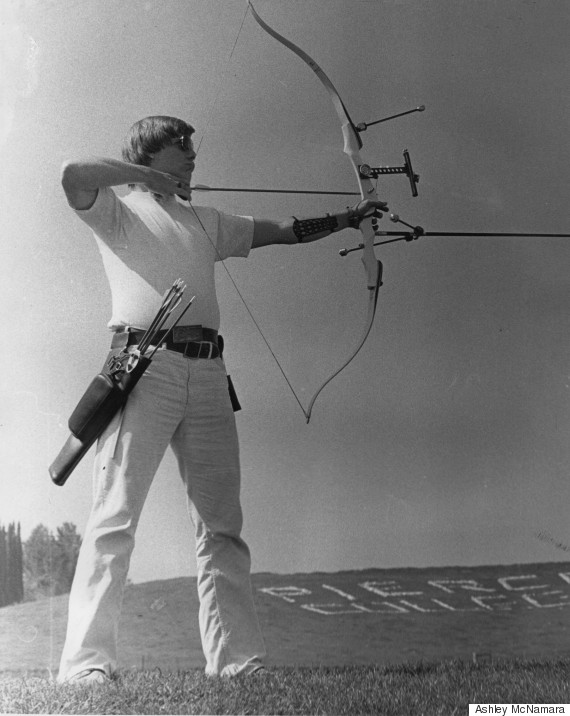 Image: Ashley’s father, Kevin.
“My father came very close to qualifying for the Olympics in archery during the 1970s … and to this day he has his ‘Robin Hood’ arrows -- ones that hit the target's bulls-eye, and then that one is split by a second arrow -- on display in his home office. … We spent many hours together in his garage teaching me his craft, and they are some of my favorite memories.

"He has a beautiful collection of bows that I'd always admired but could never use, as these were the professional bows that were very expensive. One in particular had always caught my eye: an ivory- and gold-colored, 5-foot, 128-pound bow that my mother used long ago. I must have mentioned how much I loved it a million times over the years, and Dad never gave much indication that he heard me, so gradually I let it go and stopped hinting about it. So it came as a huge surprise when it arrived at my house on Christmas Eve of last year.

“Dad was diagnosed with Stage 4 liver cancer the year before. He's such a fighter -- I know he'll pull through -- but I know that by giving me this gift, he too remembered all those times teaching his oldest daughter about a part of his life where he achieved excellence and wanted this gift to be part of his legacy to me. It is one of my most prized possessions.

"I look forward to teaching my little daughter to shoot when she gets old enough to handle a bow of her own.”
--Ashley McNamara

4. A bound book of love letters.
“For our 10th anniversary, my husband took all of our letters that we wrote each other before we were married and had them bound in a beautiful red leather book. His letters to me and mine to him are preserved forever. I still get goosebumps when I think about that book.

"I take it out once in a while and leaf through the pages where each letter is carefully placed with the envelope that includes the date and place from where it was sent. … We have three daughters now, and I’ve told them they can read the book when I’m gone.”
--Jeanne McGee Culver 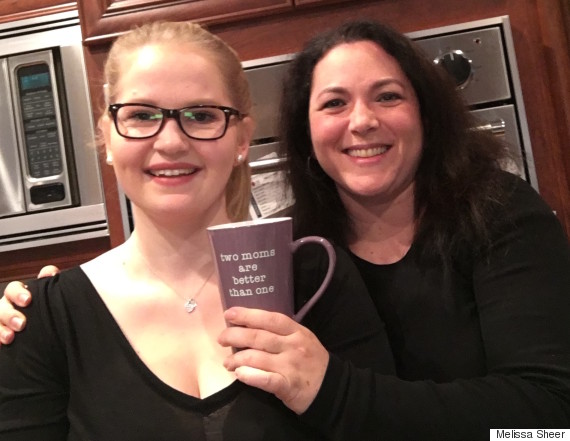 Image: Melissa and Alena, with the infamous lavender mug.
“The most meaningful gift I have ever received was a coffee mug from my German au pair, Alena, that said, ‘Two Mothers Are Better Than One.’ Some [au pairs] have a tough time adjusting to life in America. What I love about the mug … is that she recognized me as a 'Mom' -- her mom -- acknowledging that bond that she and I shared. Many au pairs bond with the kids in their charge, but relations with host parents isn't always as smooth. The lavender mug is in my cabinet and I use it several times a week for my coffee. It means a lot.”
--Melissa Sheer

6. A batch of fresh-baked brownies. 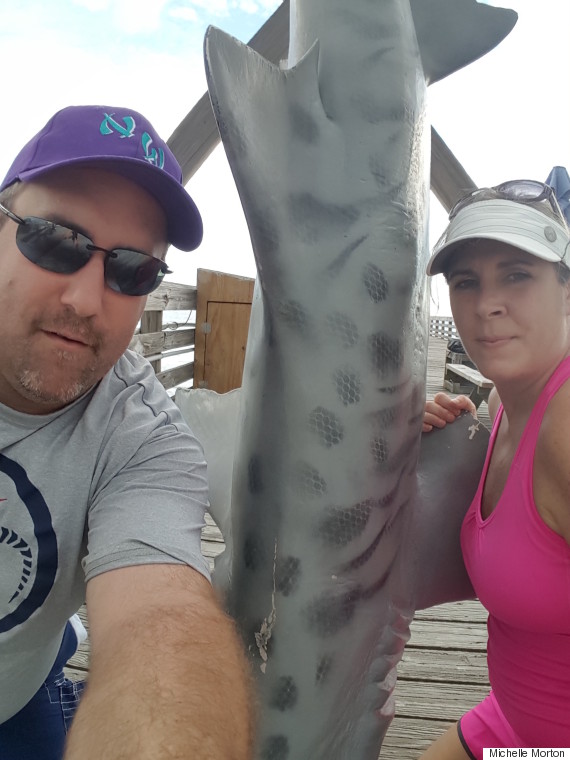 Image: Michelle and now-husband Bill.
“When I was first dating my husband, the very first Valentine’s Day we had, I drove in a snowstorm to see him. When I had gotten there, he had made me a batch of brownies -- my favorite! He knew I loved brownies so he MADE them for me!

“I always tell everyone that he had me at brownies. The reason it was so meaningful to me is because NO ONE had ever done such a simple act that had such a big impact on me.”
--Michelle Morton

7. A leather journal with a personal inscription and matching pen. 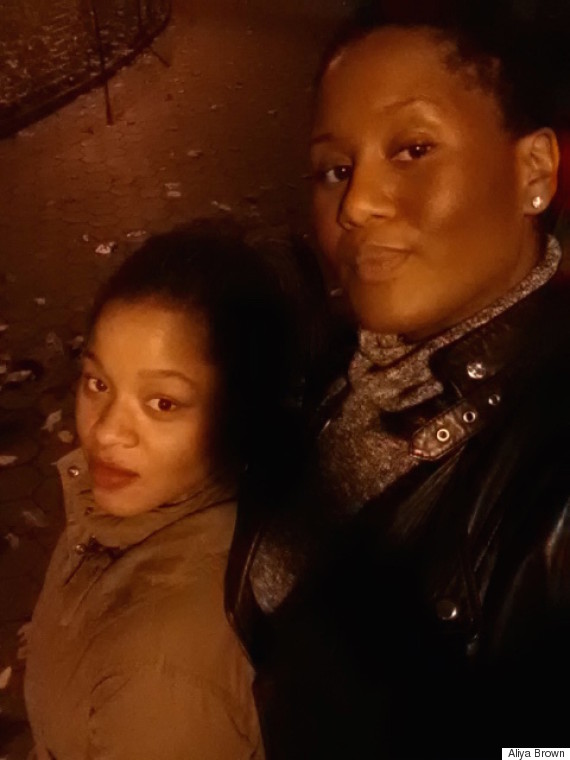 Image: Aliya, right, and Mikhaila, left.
“The most thoughtful gift I've ever received was a [leather] journal for my 20th birthday. My best friend since first grade got it for me. … on the enclosure, she inscribed the quote, 'History will be kind to me for I intend to write it.' She even got me a matching silver pen, inscribed with my first, last name and middle initial. The pen also has my birthstone -- a garnet -- at the opposite end of the point. I love to write, especially in a journal. In the past, I've held on to my journals for long periods of time. More recently, I've decided to start burning their pages once there's no room left to write as method of letting go, healing, cleansing, etc. I can't say that I'll burn this journal. It's the most meaningful gift I've ever received and it still makes me feel very special whenever I explain this story to anyone. Thank you Mikhaila, I love you.”
--Aliya Brown

8. An amazing, hand-painted birthday banner.
“When I was growing up, we were very poor. I would get perhaps $10 for Christmas or my birthday. However, one year, for my birthday, my parents put together this big banner, with a big hand-painted ‘Happy Birthday’ on it, and put on a bunch of photos from when we were much younger. It's one of my most treasured possessions to this day.”
--Dan Nainan 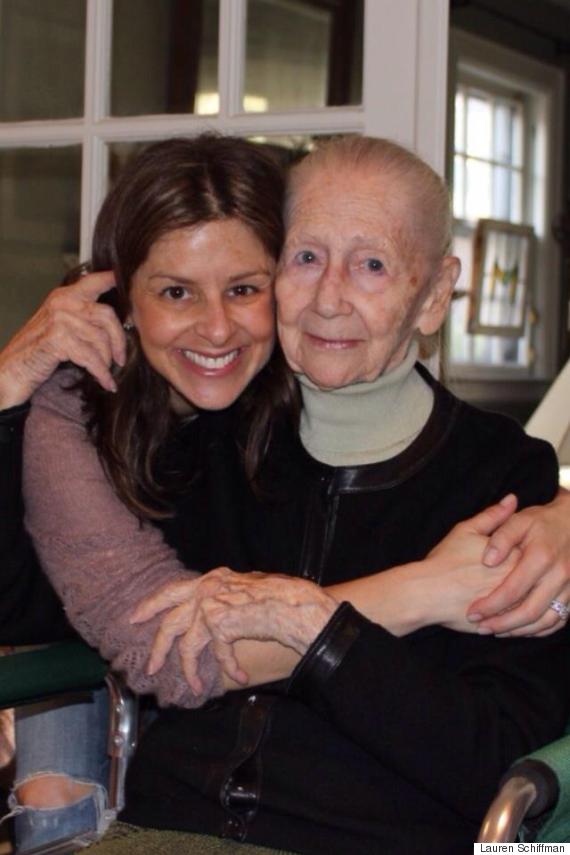 Image: Lauren and her grandmother, Rosalie, affectionately known to everyone as Grama Ro.
“My husband and I exchange cards on Valentine's Day, but rarely actual gifts. This past Valentine's Day, he gave me a framed telegram from the late 1930s. It contained a beautiful ‘old school’ Valentine's message -- one that we'd be hard-pressed to find inside a paper card these days.

“Why is it so special? Because my grandfather sent it to my grandmother -- with whom I am extremely close and who will be celebrating her 100th birthday in January -- when he was out of town one Valentine's Day long, long ago.”
--Lauren Schiffman

eBay is the place to take gift giving to the next level. With a virtually limitless selection and great deals on the biggest brands, you can find items that are more than just gifts.