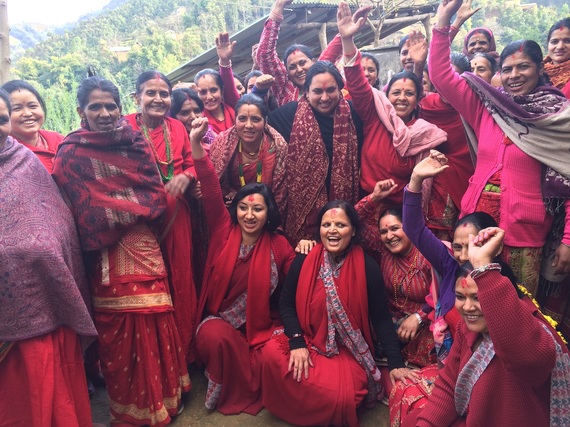 A recent report from Pro Publica reveals that the American Red Cross raised half a billion dollars for Haiti after the earthquake of 2010 and built just six homes there. Similar stories are likely to emerge from Nepal following the devastating earthquake and aftershocks in April and May of this year. The road to post-disaster recovery is paved with mismanaged funds and botched projects. Many large international agencies, often lacking local connections, have a dismal track record.

There is a pressing need to directly support communities following a catastrophe. There is also a widespread, compassionate desire to give. The question is, how do we avoid the six homes scenario?

As advocates for disrupting status quo philanthropy and amplifying outside-the-box, effective and creative funding, we explore how the underlying values of Indie Philanthropy - trust and balance in relationships, collaboration, experimentation, and empowerment - can shift post-disaster funding practices. What are the most effective models and practices for funding? Clear directives come from our interviews with Trishala Deb, the Asia Regional Director of International Development Exchange, which strengthens grassroots efforts for poverty alleviation and justice, and Beverly Bell from Other Worlds, which supports global movements for economic and social alternatives. Deb has worked in the post-disaster context of Nepal, and Bell in Haiti and New Orleans.

Bell: Ask lots of questions. Do serious homework about whether the group approaching you has a record of trustworthiness, whether it is accountable to local communities, what exactly it plans to do with the money, and what its politics are. The Red Cross will likely siphon off your dollars, as it did with huge amounts of money in New Orleans after the flood and in Haiti after the earthquake. A lot of right-wing organizations will use your donation in ways that undermine progressive agendas - and what happens after disasters is very political, all about who gets the power and the money. If they are right-wing and evangelical Christians...well, you can guess. Follow your money.

Deb: Look for the grassroots organizations. Look for the people who have been building and repairing their own homes and communities. There's always a way to find the effort on the ground that potentially makes a huge difference for people.

Bell: Support community-led programs. A study conducted by Grantmakers without Borders found what many of us did ourselves: local and grassroots organizations are by far the most effective in delivering aid and services. If they are progressive to boot, they may be working to ensure that the most vulnerable and excluded have power in shaping their own solutions and in determining the country's redevelopment model.

Trust that those living the situation know best about what they need.

Deb: Our belief is that larger societal change comes from grassroots organizations that represent local residents. People living and working in their own communities and geographies have the knowledge and strategies to build their communities, as well as an understanding of the barriers to development. We will never walk into a community with an action plan.

Is it better not to give at all than to give to the wrong outcome, or where there's no infrastructure for distribution?

Deb: IDEX has been partnering with Women Awareness Center Nepal and ASHA Nepal for about 11 years. When the earthquake happened, we were able to send out money within a week through these organizations, knowing it was channeled directly to their member cooperatives since they already know how to make community-based decisions around their recovery priorities. Both of the organizations with whom we work are deeply invested in developing layers of local leaders. That is the best-case scenario for any recovery. What we don't want to see is money going in where there's no infrastructure for distribution.

Bell: If you are reading this article, you have a good chance of finding a contact who can connect you with a group that can use your money in powerful ways. If not, then use your funds to help other progressive international movements. Better not to give than to give to the wrong outcome. In Haiti, we all wished that most of the aid had never been given.

Deb: There's so much donors can learn from partners in times of crisis. I want to encourage all my colleagues in philanthropy around the world to embrace the opportunities for learning and the various paces of learning. For example, in the first two months after the quake there were so many five- to ten- minute conversations that enabled us to understand their capacity and degree of crisis. Then things settled down and they were busy with their recovery work and it was important to honor their time there as well. Our main job is to listen.

Adopt a broader and deeper analysis that helps you support work to resolve the structural problems that create vulnerability and poverty in the first place.

Bell: When we talk about 'natural' disasters, beyond the event of nature, what happens in the aftermath is usually unnatural, highly political phenomena that exacerbate pre-existing inequalities and vulnerabilities. To guide your and others' efforts, learn and share the priorities and analyses of social movements and organized communities. Most important of all, go beyond giving aid to supporting local movements in resolving the structural problems that created their vulnerability and poverty in the first place. This means connecting with sources that organize solidarity, and challenging US government policies and corporate tyranny playing out in disaster capitalism.

Deb: We understand that long-term funding is always more important than short-term funding. It helps communities plan. We always provide support through general operating funding and our grants are not connected to outcomes. The groups are then able to adapt to changes that may occur over time. This approach is a manifestation of our trust in our partners, a reciprocal trust.

Avoid having expectations around one set of goals.

Deb: We must understand the cultural assumptions we have and appreciate the cultural context and specificity of the places we're working in as much as we can. With this type of approach, we don't get sucked into an expectation of one set of goals for all of the organizations we're working with. Each organization and location is really different. There is a potential for the most impact when we appreciate these differences.

Last notes for the novice.

Bell: First, support what those directly impacted are doing instead of starting your own initiative. Second, at every step, promote mechanisms and opportunities for communities, especially of those whose voices go unheard, to take the lead. Third, act with care and deliberation instead of acting as fast as possible. Fourth, avoid material aid unless you have a direct and reliable connection with the group who has asked of for it; otherwise, you may be putting local production out of work or just feeding a giant sidewalk sale.

A word on why to use an Indie Philanthropy approach when funding post-disaster.

Bell: Indie Philanthropy addresses a lot of the principles that I have seen work in places in crisis, either natural disasters or political ones. In a nutshell, these principles are: Trust that those living the situation know best about what they need. Help shift power dynamics so that those impacted get to be part of the decision-making. Be as transparent and accountable as you expect your grantee to be to you. Be willing to take risks.

In the world of post-disaster funding, good intentions are at best simply not enough, and at worst, actually harmful. The crux is to be an engaged ally as much as a funder. Listen to, support and trust those who are already doing effective work locally.

Fatima van Hattum is the Project Coordinator at Kindle Project and works with www.NewMexicoWomen.org in Santa Fe. She has a background in international development, food justice, gender and labor rights.

Arianne Shaffer is the Communications Director at Kindle Project. She is a storyteller based in Toronto with a background in interfaith education and documentary film.

Want to get involved in Indie Philanthropy? Click here to see how!

Stay in touch with us on social media:

Copyleft Other Worlds. You may reprint this article in whole or in part.  Please credit any text or original research you use to Other Worlds.