One of the first questions to ask before starting a business is, "Can I make money in this industry?"

While that may seem obvious, some people confuse sales growth with profits. Sales may be growing in a particular industry, but if profit margins are thin or nonexistent, you could have your work cut out for you when it comes to building the business and taking home a paycheck. After all, the profit margin represents how much you take home for every dollar in sales, so higher margins are definitely a good thing. And profitability is among the metrics that shed light on your creditworthiness.

Sageworks, a financial information company that analyzes privately held companies, recently researched which industries had the highest profit margins over the past 12 months. Through its cooperative data model, Sageworks collects financial statements for private companies from accounting firms, banks and credit unions, aggregating the data at an approximate rate of 1,000 statements a day. Net profit margin was adjusted to exclude taxes and include owner compensation in excess of their market-rate salaries -- adjustments commonly made to private-company financials in order to provide a more accurate picture of the companies' operational performance.

Of course, business owners can take steps to boost their profit margins beyond industry averages, and just because the industry average is high doesn't mean your business will necessarily have the same profitability. But these benchmarks are one place to start if, like many Americans, you're looking to start your own business. 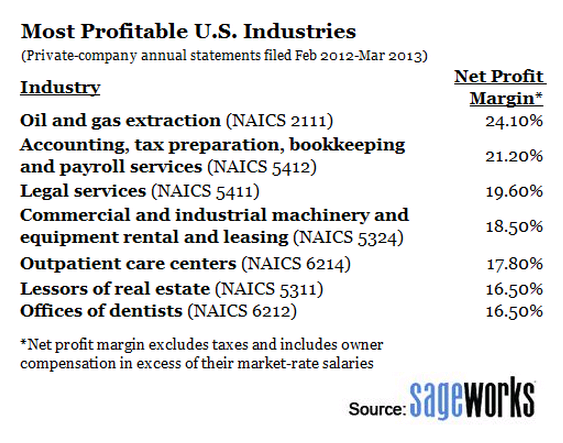 Out of about 27 million businesses in the U.S., nearly all are privately held, and 22 million were one-person operations (what the government calls "nonemployers"). A report earlier this month by the Kauffman Foundation found that the rate of American adults starting businesses last year fell slightly as labor market conditions improved. But the percentage of adults creating businesses each month remains above pre-recession and long-term averages, and for many people, layoffs, life goals or other factors continue to make entrepreneurship attractive.

Sageworks analyst Michael Lubansky said much of the profitability in the oil and gas extraction industry may be driven by the continued development and growth in the U.S. of unconventional oil and gas supplies, such as shale gas and tight oil.

Accounting firms, legal services and offices of dentists are perennially on the list of most profitable industries, according to Lubansky. "They are structurally set up as mature industries with low overhead and, for the most part, have less reliance on the point-in-cycle of the economy," he said. "In other words, they are services that maintain demand during downturns."

Outpatient care has been a growing industry in recent years as many procedures are being performed in the less costly outpatient environment rather than in hospitals. "Many states now have more than twice as many outpatient care centers as they did a decade ago," Lubansky said. "Additionally, it could be that the mix of patients in outpatient care centers tends toward those with more favorable reimbursements - in other words, less Medicaid and Medicare patients."

For lessors of real estate, a combination of declining vacancy and increasing rental rates is likely contributing to the industry's profitability, Lubansky said. "There are generally positive trends in vacancy rates in both commercial and residential real estate," he said. "As for rates, some areas are experiencing increases for residential rentals, but on the whole, this doesn't appear to be happening broadly. For commercial real estate, rents have continued to increase slowly over the last couple years, although still below rates before the financial crisis in 2008."