In his State of the Union address last week, President Barack Obama cheered rising wages. What he didn't mention is that much of the income gained since the recession has gone into the pockets of the richest Americans.

In all states, the rebound in income in the three years after the recession pretty much all went to the richest of the rich, the EPI found.

The EPI paper, using state-level tax data from the IRS, builds on older research by economists Thomas Piketty and Emmanuel Saez, who analyzed income gains captured by the top 1 percent to illustrate broader trends in economic inequality. The French economist Piketty got famous last year for his book, Capital In The Twenty-First Century, which warned that inequality was only going to get worse without government intervention.

The map below shows where the richest 1 percent captured the greatest percentage of the overall income gained between 2009 and 2012. The darker orange and red shades show where the largest share of income growth went to the 1 percent. 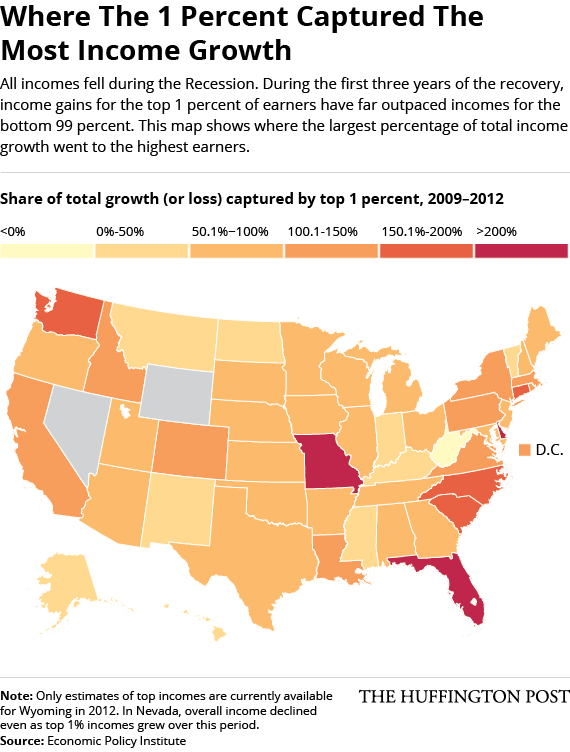 Among the states where the 1 percent got the biggest share of the income gains were Delaware -- where they got 301 percent of income growth -- and Florida, where they got about 260 percent.

Nevada was arguably one of the most-unequal states in the country during that stretch: The income of the top 1 percent jumped nearly 40 percent, while the income of the rest fell 16 percent. But because total state income fell -- the only state in which this happened -- it doesn't register on the map, which measures the 1 percent's share of income gains.

West Virginia was the least-unequal state in the country during that stretch: It's the only state in which the 1 percent suffered falling income while the 99 percent enjoyed rising income.

Since the recession ended more than five years ago, wages have been one of the slowest parts of the economy to recover. In his speech last week, Obama applauded the 11 million new private-sector jobs created since 2009 and claimed that "Wages are finally starting to rise again."

But wage growth is still a lot slower than it was before the recession. And it's still too slow to keep up with the growth enjoyed by the 1 percent, who typically don't have to beg employers for raises.

States Where The Middle Class Is Dying: 24/7 Wall St.