﻿﻿While violent crime rates in the country have fallen steadily over the past several decades, the United States is still one of the less peaceful nations in the world. According to the Global Peace Index 2015 report, the United States ranked 94th out of 162 countries. However, the peacefulness of American communities varies considerably within states.

Following the example of the Peace Index, 24/7 Wall St. generated an index to rank the peacefulness of each state in the nation. States with high violent crime and homicide rates, as well as high estimated small arms ownership and high incarceration rates were identified as less peaceful, while states with lower incidence of these factors were more peaceful. According to our index, Maine is the most peaceful state, while Louisiana is the least peaceful.

Click here to see the most violent states in America.

In an interview with 24/7 Wall St., Aubrey Fox, executive director of the U.S. office at the Institute of Economics and Peace, said, “A perfectly peaceful place would be a place where there is no violence and no fear of violence.” He explained this would be a place with no crime, no police spending, a strong government, and a healthy economy.

There are two ways to look at the relationship between peace and enforcement, Fox explained. While the perfectly peaceful community would have zero police officers, communities need to invest in policing to deal with local threats and lower crime. However, “There is typically a point at which you get less return on your investment,” Fox said.

Fox gave an example of a community with crime at a 50-year low, but where police are spending seven times as much to keep it that way. “We really need to ask how much of a lost opportunity cost is that?” Fox argued. In fact, U.S. crime levels are at their lowest level since 1972. Police spending was far lower at that time, however, according to Fox.

The connection is far from well-understood, however. Crime continued to drop in the U.S. during the most recent economic downturn, for example. During the downturn, police spending fell dramatically.

Still, economic costs add up the less peaceful a community becomes, and poor socioeconomic climates can lead to less peacefulness. “Being poor or having less access to resources does put you on a path that is less peaceful,” Fox said.

The manner in which these factors lead to violence, however, is very difficult to establish empirically. John Roman, senior fellow at the Urban Institute, an economic and social policy think tank, said, “The biggest predictor of whether there’s violence is dense clusters of unskilled young men.” He went on to explain that poor socioeconomic factors such as low educational attainment, high poverty rates, and high unemployment all lead to more violence by contributing to higher numbers of unskilled young males.

These are the most violent states in America, according to 24/7 Wall St.

PHOTO GALLERY
The Most Violent States In America
Download
Calling all HuffPost superfans!
Sign up for membership to become a founding member and help shape HuffPost's next chapter
Join HuffPost 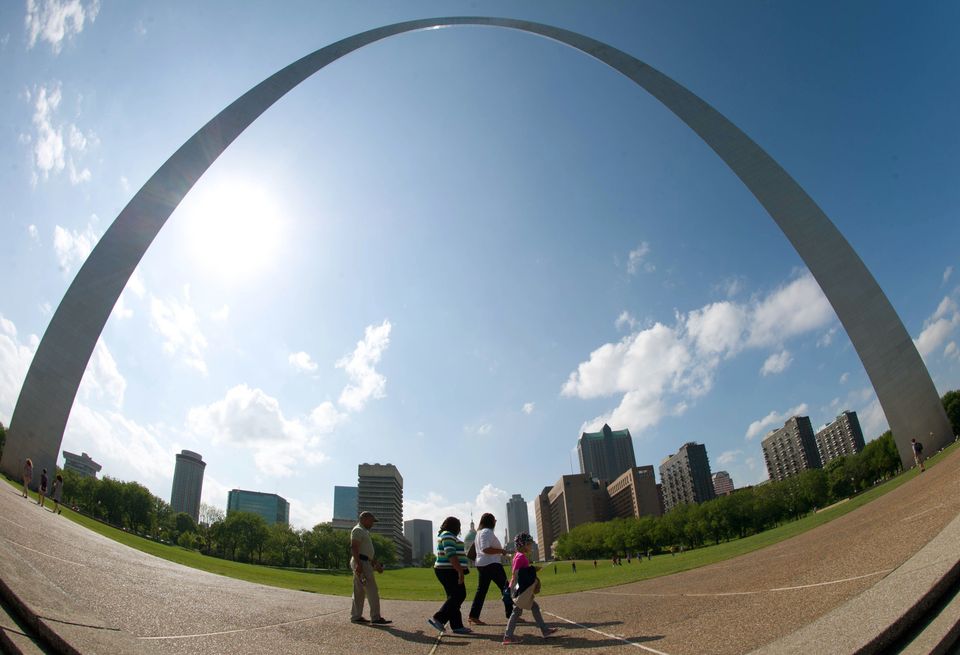 1 / 10
10. Missouri
<strong>&gt; Violent crime rate:</strong> 433.4 per 100,000 (13th highest) <span> <strong>&gt; Murder and non negligent manslaughter rate: </strong>6.1 per 100,000 (7th highest)<br> <strong>&gt; Median household income: </strong>$46,931 (14th lowest)<br> <strong>&gt; 2014 unemployment rate: </strong>6.1% (23rd highest)</span> <span><br> Based on five measures of violence, Missouri is the 10th least peaceful state in the nation. State enforcement agencies reported 433.4 violent crimes per 100,000 people, the 13th highest rate nationwide. In theory, a perfectly peaceful community would not have any police officers, and larger police forces are generally found in less peaceful areas. In Missouri, there were 332.4 police employees per 100,000 state residents, the ninth highest proportion in the country. Maintenance expenses for larger police forces to keep communities safe are part of the costs of violent areas. As in nearly all of the least peaceful states, the median household income of $46,931 in Missouri was among the lower income figures nationwide. Families and individuals who have been victimized by crime in some way, many of whom were among low-income earners, can expect at least some financial relief in the near future. Missouri Governor Jay Nixon signed a law that will go into effect this August that will increase the funds available to victims of violent crimes and their families.</span> &nbsp; <em><span>Read more at&nbsp;<a href="http://247wallst.com/special-report/2015/07/15/americas-most-violent-and-most-peaceful-states/">24/7 Wall St.</a></span></em>
KAREN BLEIER via Getty Images