Maya Angelou once said, "I love to see a young girl go out and grab the world by the lapels. Life's a bitch. You've got to go out and kick ass." And like the quote, women within in communities across the United States are assuming bold stances and using their voices and talents to become key players in movements pushing for change.

Hip Hop duo, Mother Nature, out of Champaign, Illinois, comprised of two dynamic female emcees, T.R.U.T.H. and Klevah, are some of those women making waves as both young activists and powerful hip hop emcees. 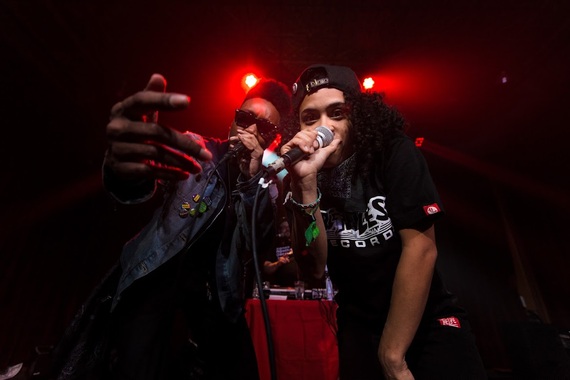 T.R.U.T.H is originally from the Austin neighborhood on Chicago's Westside and said writing preceded emceeing. She was an introvert as a child and sought writing as a way to get her feelings out. T.R.U.T.H later found emceeing as a fit for her creative expressions. She is inspired by Chicago hip hop artist Chance The Rapper and singer Michael Jackson--a fan of Jackson because of his ability to be himself and speak on social issues. Her Eve EP was released in February of 2015.

Klevah, is a native of Champaign and feels at home on the mic. Her father is an emcee and helped develop her craft in her early years. She recalls being exposed to artists such as Public Enemy, Tribe Called Quest, Erykah Badu, and other conscious artists. Her father helped her hone her craft, but her voice as an emcee came as she experienced life. Her album GLDN EP was released in November 2015.

Now joining forces, both artists were inspired by Dr. Ruth Nicole Brown's Gender and Women's Studies courses at the University of Illinois at Urbana-Champaign. Dr. Ruth Nicole Brown is an Associate Professor in the Gender and Women's Studies and taught Klevah and T.R.U.T.H in various courses at the University.

"I never realized I could do everything I want to do in life through hip hop," Klevah said while also attributing Dr. Ruth Nicole Brown's guidance in realizing they could fuse hip hop with academics and other aspirations. In addition to inspiring the duo, Dr. Ruth Nicole Brown inspires other black girls through her organization Saving Our Lives, Hear Our Truths (SOLHOT), "a practice based, publicly engaged, collectively organized space for Black girls to envision Black girlhood anew."

Mother Nature aspires to "teach people to be solid within themselves," as Klevah put it. She added that people are looking for affirmation often times--a voice to tell them that the way they are feeling is understood and shared. The duo expresses yearn to specifically target the minds of younger people while also reaching them in a way that they can still find hip and enjoyable.

"I like to connect to the youth. Any movement is youth-based at the end of the day. Youth are on the ground level," T.R.U.T.H. explained.

Besides making tracks like "Afro", a track they hope young black women will listen to and feel empowered, T.R.U.T.H and Klevah of Mother Nature are involved in the Black Lives Matter movement.

"The music influenced the choice," Klevah explained as to what inspired them to become part of the movement. They attended a Black Lives Matter convening in Cleveland, Ohio earlier in 2015 to teach a workshop, which further empowered Mother Nature to aspire to teach more and understand their responsibility as both emcees and people of color.

After returning from Cleveland, Ohio, the two worked with others to set up a Black Lives Matter chapter in Champaign-Urbana, Illinois, which is still in its beginning stages.

And inspired by recent police brutality incidents, T.R.U.T.H. is in the process of making a mix tape entitled, Millennial Protest Music. A song entitled, "Stop Killing My People," is one the tracks to be on the mixtape due to come out some time in January.

They agree that sometimes being a woman can make people doubt their abilities as an emcee but added that they see being a woman as a strength that gives them the ability to be "100 percent themselves."

"Women have a lot of power and the power to influence," Klevah said.

Mother Nature is expected to release their debut album sometime in Spring of 2016. Their music can be found on Bandcamp.