Sam and I are on our usual Friday morning date. We spend two hours at the children's museum, then we head down the street to Sam's favorite pizza place. Sam walks in front of me in a zigzag, making sure to splash into every single puddle with his shiny new rain boots. He starts to say something about the rain, but then stops in his tracks and turns to me, hands on hips, head cocked just a bit as he looks up. "Mama." (It is usually more of a statement than a question.) "Do you know that coffee shop in Budapest? It smelled just like this."

He walks on before I even have a chance to comprehend what he is talking about. But then it hits my nose -- the strong, smoky scent of roasted coffee. Rain-splashed sidewalks. Warm air. I look at the storefront next to us: a coffee shop.

I walk after Sam in a bit of a haze, first figuring out how he even remembers that other coffee shop on that other summer day on another continent a year ago. I haven't thought about it since then, but it all comes rushing back. The previous summer we traveled to Budapest for 10 days -- one of those was a wet, warm day that we spent riding buses, trolleys and trams around the city. We visited the stone lions guarding the Chain Bridge, walked along the Danube and then ended up at my favorite coffee shop for a snack. We sat on the terrace under a green awning, watching taxis and buses pass. Sam and I went inside briefly to pick out our cakes from a big rotating display. Chocolate and cheese cakes, fruit tarts and Sam's favorite "pogacsa," a cheesy, salty pastry. We placed our orders and sat at our table. My parents joined us, then a couple of their friends. I was worried that Sam's patience was going to wear down, but I was pleasantly surprised. He ate his pastry, drank from a big boy glass of water and seemed content to absorb the city around him. I took a picture of him through the glasses, bottles and plates between us. I loved that afternoon, but I haven't thought about it again until now. 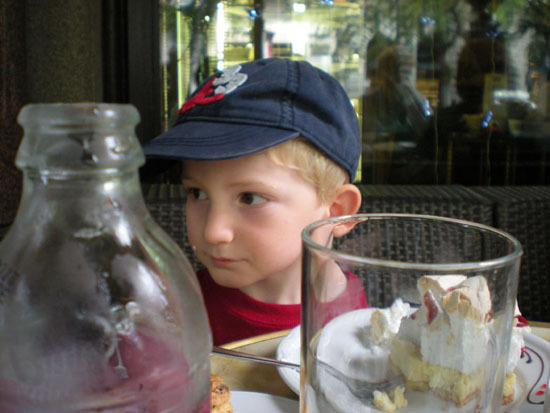 I am happy to recall that day, but shocked that Sam remembers at all. He is 4. How did that afternoon have such an impact that it was even worth his active little brain's recalling? What else is in there, waiting to jump into the foreground? What other memories have I given him without even knowing that it was special and to be treasured?

There was never any question that Sam would be bilingual. I came to America as a college student just 15 years before he was born. My parents arrived two years prior to his birth and soon after my brother moved to be near us as well. We all use Hungarian when we are together. I saw all the research about bilingual kids -- that he would be better at math and reading because of it, that I will have to be consistent in what language I use with him, and that I need to read to him in Hungarian every day. Of course it all made sense and even without the research I just felt that Hungarian would be the only natural language between us. We were already so connected through blood and placenta and umbilical cord. How could we not be connected through language?

But when Sam was born, I was quiet. I remember giving him a bath a few days after we came home from the hospital. My mom stood next to me as I dried off his wrinkled little body. He was screaming. I wanted to just feed him and put him down. I was nervous about my mom standing there, watching my fumbling hands, feeling my anxiety rise by the moment. How do I make him stop crying? "Just talk to him," she finally said. "What should I say? Does he know me?" I asked, so uncertain and tired and confused. "Of course he does. Your voice is the only one he knows."

I found my voice with Sam slowly, carefully. I talked to him about silly things and serious things as I changed his diaper, bathed him, fed him. I sang to him little songs that I haven't heard -- or sung -- since I was a child and I didn't even know I still remembered. We read books and watched cartoons in Hungarian and later learned songs and nursery rhymes together using my childhood books. First it felt a bit like talking to myself and I was self-conscious and tentative. But soon, Sam started to respond -- first with coos and smiles, then later with fragments and words of his own. These days Sam tells me "Mama, talk to me in Magyar," when I slip into English, and the way he mixes his languages in such a sweet, funny way makes me wish he would never lose his accent and the hilarious word and language combinations.

It's only been recently, since he has really been able to "talk" and apparently remember seemingly small, unimportant scenes from his life that I have begun to think about what it means for him to be bilingual. It's not just about the language. Sure, it will be great that he can speak a foreign language, however obscure. But there is something else, something deeper that I passed on to him through our shared language. Being an immigrant is not something that happened to our family generations ago, but it's happening every day, right in front of Sam's eyes. When Sam talks about his short visits to Budapest, I sense that he also inherited that unsettled, "I-don't-know-where-I-belong" immigrant sensibility that I still feel every single day. I have lived in this country for 19 years now and have been a citizen for 8. Yet I still feel like a bit of an odd duck, an outsider. I feel a tug in my ribs, a bit of homesickness, a strange, strong longing for my previous self, a quiet melancholy.

Some days, out of nowhere, his longing bubbles to the surface. He says "I want to go to Budapest," pronouncing the "s" as "sh," just like a native Hungarian. We talk about the plane ride over the ocean, the house where we stay, the toys we left there, the other little boys he plays with during our visits, the neighborhood dog he loves to pet. "I miss Bolhas," he says of the dog and adds: "I miss Dedi too," referring to his great-grandmother. He asks about the people we met there, the food we ate. He asks for cookies that Dedi baked for him and wants to wear his Budapest t-shirt often.

I am glad that our visits to Hungary have made such an impact at such a young age. I know we have many more visits ahead of us and I know that each time he will notice and learn more and more about where his mama lived for 18 years of her life. But I worry that he too will feel like an outsider, a part of him always wandering cobble-stoned streets somewhere in the heart of Europe.

Lately, Sam's been making a big effort to put sentences together in Hungarian, asking me for help. "Mama, help me say it in Magyar! How do I say it?" I slowly pronounce the words and he repeats them after me. He is patient with this impossible language at the age when he does not have patience for much. His pronunciation is perfect -- sharp "sh" and rolling "r" sounds. He is more fluent in English, but he understands everything I say in our secret language. When he strings a sentence together in Hungarian, he is eloquent and thoughtful. When he needs comfort, he asks for Hungarian songs and books. During our lazy afternoons at home, he likes to twirl my hair and ask "Mama, why are you Magyar? Am I Magyar too?"

After our a leisurely pizza lunch and a long nap at home, we sit together on the floor of Sam's room and pull out his Budapest picture book. Sam flips to the page with the zoo and the big square near our apartment. He points at the lions by the Chain Bridge and counts all four of them: "Egy, ketto, harom, negy." On the next page we talk about the Danube, the Castle Hill. He recognizes the yellow trams, the big clock of the train station, the wide avenues running across the city.

And the smell of the coffee shop.

More:
raising bilingual childrenParenting ImmigrantsParentsbilingual
Newsletter Sign Up
Raise the kind of person you'd like to know
Subscribe to our parenting newsletter.
Successfully Subscribed!
Realness delivered to your inbox