Authored by Dr. Linda Shanti McCabe for Psyched in San Francisco Magazine. Dr. Shanti McCabe holds a doctorate in Clinical Psychology and works with women (including pre and postpartum) recovering from food, weight and body image issues. She holds SoulCollage® groups for women (including pregnant and postpartum) using expressive arts to find and express the many parts of the Self. She blogs at Recoverymama.com.

The moment a child is born, the mother is also born. She never existed before. The woman existed, but the mother, never. A mother is something absolutely new. ~Rajneesh Look

I remember when I was a brand new first-time mom, like four days brand new, and went to a new mom group. I was in the no-sleep, hormones still rollercoaster-ing daze. I was trying to look like I knew what I was doing, even though it felt like the bottom had dropped out of my body, my breasts were bowling balls and I was wondering why no one ever tells you about urinary incontinence.

What is Mommy Boot Camp?

Mommy Boot Camp is an initiation. There is no doubt about how motherhood changes you. And by being changed, literally by giving birth you are now a member of an entire group of people to which you didn't formerly belong.

It is a rite of passage. Remember the animals- winged horse-like creatures called thestrals -- that only children who have lost a loved one can see in the Harry Potter books? That is a symbol of having been through a rite of passage. You are now a member of a group to which you formerly did not belong.

What is the process of initiation, what is the ceremony or series of actions that makes a person a member of this group? Ask any new mother what they want to know about and it will be clear:

I have noticed it often takes 1-2 years to accept change and 5-10 years to become comfortable with it. That has been my experience with eating disorder recovery, with becoming a psychotherapist, with turning 40, with becoming a mother. During those early years, it was a struggle. And I looked to those who had been through it to guide me. If you were there with me, that was good, but if you had been through it already and were in or beyond that 5-10 year range, then I was really interested in what you had to say! 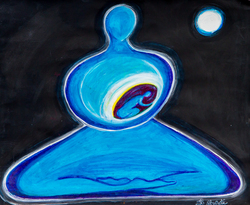 A Three-Part Rite of Passage

Rites of passage1 are often divided into three sections: Separation, Transition and Reincorporation. With the birth of motherhood, there are clear stages in this rite of passage.

1. Separation (Pregnancy)
During the separation phase of a rite of passage, women are preparing to leave behind their old life and enter a new one. This is the stage where pregnant moms are voraciously reading "What-to-expect" or "girlfriend guide" or month-by-month chapters in how their baby is developing in utero. It is the time during which they are talking to doulas, midwives or moms who have "been through it," decorating the nursery, having a baby shower, making their birth plans, packing their bags for the hospital. It is often an excitedly anticipatory time, though it can also involved anxiety, and sometimes, depression. This is the time to begin to surround yourself with a tribe of fellow new moms who are going through this or have been through this rite of passage. Though the only way you can travel through a rite of passage is by facing and walking through your own unique fears, part of the process of initiation always involves those who have gone before you to be calling you into and through it. Find those people!

2. Transition (Labor and Delivery)
This is the period of trial. Sometimes it is long, sometimes it is short. It is always a period during which each woman is tested: physically, emotionally, psychologically beyond the limit of their previous self. I remember at one point during a break between contractions having the thought:

Then, a split second later, realizing:

Oh. I COULD die. Many, many women die in childbirth! I now understand!

All thoughts then ceased again as the overwhelming pain of another contraction began. I am proud that I didn't have pain medication during my labor and delivery experience. However, this was also not necessarily the plan. At the point where I finally said, "Give me some f-ing medication!" it was too late. The window had passed and it was time to push.

If there is any consistency I hear in women's birth stories, it is that it didn't go according to plan. Many women who don't plan to have a C-section end up having one. Many women who didn't want medication, end up choosing to have medication; many women who did want medication, couldn't have it. Many women who plan to be at the hospital don't end up giving birth at the hospital. And many women who plan to be at home need to go to the hospital. Some women need to be induced into labor. Some women do not survive labor. Some babies do not survive. Some babies need to be born stillborn. Regardless of your experience, it will be a trial that you will travel though and be changed by. Labor and Delivery is not for the faint of heart. You will not come out of the experience the same person as before you went in.

Here is an ancient teaching story borrowed from wisdom of the great African savannahs:

The moral? Run directly into the roar. When frightened, run directly into your fear. I have not heard a better analogy for labor (and the marathon of motherhood that is to follow). There is no other way to survive it other than directly into and through it. I have known women (including myself) to be described as sweet, pleasing, companionable people that struggle with being assertive until they go through labor, delivery and becoming a mother.

3. (Re)incorporation (Postpartum)
A new fierceness is also often born with the motherhood identity. After having a baby, you have become a lioness. I remember one time when my son was an 8-month-old baby and I was back at work. One of my colleagues was trying to consult and collaborate with me on a (nonemergency) clinical issue. I had just received a text from my nanny that my son was sick. I don't remember what I said to this colleague -- hopefully it was more appropriately and assertively professional -- but on the inside I was thinking

Along with this guttural fierceness, Postpartum, the first year of a baby and mother's new life can also be a slow and arduous time of transformation. This more painful part of the rite of passage can get stuck if a mother is isolated and/or struggling with postpartum depression or anxiety. When we look back to the wisdom of the story from the savannah, the lesson is to go directly toward the pain and discomfort.

"Run towards the roar," the old people used to tell the young ones. When faced with great danger in this world, run towards the roaring, go where you fear to go, for only there will you find some safety and a way through danger. Trouble that is faced when it first appears can be the roar that awakens a person's deepest resources. In times of fear a person either steps into life more fully or else slips into a diminished life characterized by fear and anxiety.

If a mom is isolated or paralyzed with anxiety and fear, she can be unable to run toward the roar. What happens if the mother doesn't run toward the roar? Some part of her soul is lost and the motherhood identity gets stuck in not-yet-transformed. Postpartum depression can linger and the trauma of this can be passed on to the baby, beginning an intergenerational transmission. That is when the tribe is called to bring the mother more fully to the other side of this massive rite of passage.

If you are new mom wanting to know others have made it across the threshold, survived and thrived, I am here to tell you it is possible! You are not alone! If you are thriving in your new motherhood identity, bless you. But if you are not, I encourage you to remember motherhood is a marathon, not a sprint. By all means, run toward the roar, but also, find your pack. Find people to support your imperfection (including family, friends, therapists and medical professionals) in finding your new motherhood self slowly, if you can't run. Find the people that can see the thestrals. Let yourself cry but then keep moving. Don't let yourself get paralyzed. We mothers that have survived this rite of passage are here, calling you forth. Find your pack of moms that is supportive of you.

Keep going, mama. Don't give up.

Notes:
1. Peter Prevos, "Initiation and Rites of Passage" February 6, 2001. Arnold van Gennep (1873-1957), a French anthropologist, born in Germany with a Dutch father, is famous for his study on rites of passage. In his book Les Rites de Passage (1909). Van Gennep argues in this book that rites of passage comprise of three ritual stages; the so called tripartite structure: séparation, marge and agrégation (separation, transition and reincorporation) or preliminal, liminal and postliminal stages (before, at, and past the threshold).

2. Michael Meade: ©2011.
Michael Meade, D.H.L., is a renowned storyteller, author and scholar of mythology, anthropology and psychology. He combines hypnotic storytelling, street-savvy perceptiveness and spellbinding interpretations of ancient myths with a deep knowledge of cross-cultural rituals. He has an unusual ability to distill and synthesize these disciplines, tapping into ancestral sources of wisdom and connecting them to the stories we are living today

More:
ParentsMotherhoodBody ImageParenting
Newsletter Sign Up
Raise the kind of person you'd like to know
Subscribe to our parenting newsletter.
Successfully Subscribed!
Realness delivered to your inbox