It's a simple truth: Parenting little ones is an up-close-and-personal kind of thing. From the moment I wake up in the morning, to the moment I kiss that last sleepy head goodnight (for the eleventh time), I'm in someone's business. Or they're in mine.

Whether I'm changing a diaper, or someone is accompany me to the bathroom (just for fun). Whether my daughter wants up (again), or I'm reaching for my son's hesitant hand to hold as we cross the street. Whether I'm fixing a not-so-gourmet family-friendly dinner, or I'm scraping cereal off the hardwood floor.

This summer, that closeness has been intensified. We've all been together. A lot. A lot, a lot. And while I've watched the tan lines grow more defined, and the calendar pages flip all too quickly, it seems I somehow missed some of the big stuff.

Last week, we were visiting some good friends, and I was able to watch my kids. At a distance. And this summer? It's been good to them.

The first moment I noticed it was when we were on a walk. My toddler took a different path from me. She wanted to follow the big kids along the rugged trail, while I walked the paved path with the empty stroller. She marched on, and didn't think twice that I wasn't following. My sweet little girl with gross motor delays, formerly so unsure of her footing and balance, walked with zest and confidence. She called ahead to her brothers clearly, and with purpose. We've been working so hard to develop her strength -- going to therapies, working on endurance, and building confidence -- that I somehow didn't realize we'd succeeded. So much for baby steps. Though they were surely there, I was too close to notice. 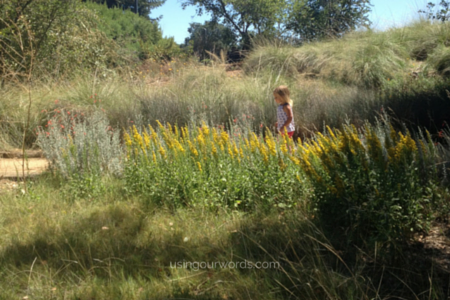 Later that afternoon, after some very real 4-year-old moments, I lost track of my middle son while we were at the pool. When I caught sight of him, I saw that he had headed off toward the deepest pool -- the one with the diving boards. And instead of running to his aide -- or to scold him -- I was able to sit back, and watch with a smile as he threw his sweet little scrawny body into the air. So often I forget that he's 4. 4. There are times that because he runs as fast as a 7-year old, or hits as hard as his big brother (baseballs and his siblings, I'm afraid), that I forget. He's still a very little boy. And now he's a very little boy with very big ideas about what he's able to do -- when given a bit of space.

My oldest? Well, his change isn't as easy to put my finger on. Not because it isn't there, but because it's not simply a new-found talent or confidence. It's in the way he walks. It's in the expressions on his not-so-baby face as he talks. It's in the way he easily goes off on adventures without so much as a glance back for reassurance. It's this wonderful combination of innocence and maturity all rolled up in a toothless smile. Being with our friends gave me the chance to really listen to what he was saying. To hear how grown up, capable, and goodhearted he is -- without him having to tell me.

As for me, well, it seems that throughout this summer, I've been judging myself on the up close stuff too. The uncombed hair and food stains, my too-sharp tongue in the heat of the moment, yet another skinned knee/elbow/ego. Sure, these are the little moments that make up each day. But each day offers so much more to make up a child. And -- at a distance -- it seems like I'm doing just fine as their mom after all.

A version of this post originally appeared on Using Our Words.

Amy Heinz is a San Francisco Bay Area mom of three and the writer behind Using Our Words -- a parenting blog filled with lessons she's learned (usually the hard way), laughs she's enjoyed (mostly at her own expense), and tears she's shed (this mama's got heart). You can also find her on Facebook.

Voting Made Easy
Register to vote and apply for an absentee ballot today
Register now
More:
MotherhoodParenting summerParentssummer vacation
Newsletter Sign Up
Raise the kind of person you'd like to know
Subscribe to our parenting newsletter.
Successfully Subscribed!
Realness delivered to your inbox