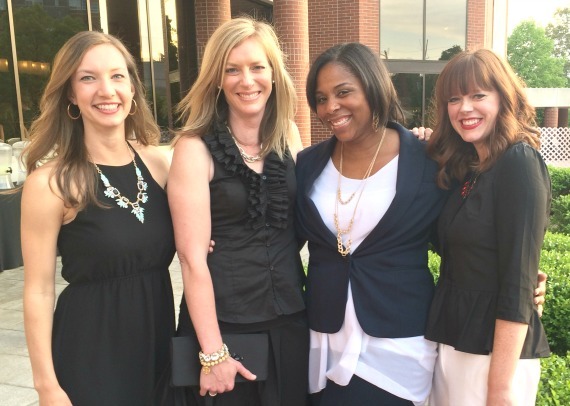 Why is it that women invent this competition to see who is the better mother?

The cattiness starts immediately. The very second you share a photo from your hospital bed with your brand new bundle of joy it begins. Someone is seeing the photo and making a judgment.

"Oh she clearly put on makeup before taking this picture."

"I can't believe she didn't put makeup on."

"How embarrassing, her hospital gown is pulled down too low."

"Why didn't she put on a nice pair of pajamas?"

You're innocently basking in the glow of being a new mom, oblivious to how hard the next few months will be and unaware that someone is judging your happy moment.

Men aren't guilty of this as far as I can tell. My husband has a running joke with a friend of his where they text each other when one of them does something with the family. They proclaim that this makes them Father of the Year. There's no animosity. There's no inner struggle. They laugh. I assure you my husband doesn't think that his friend getting ice cream with the kids has any bearing on his own ability to parent.

It's different with women.

What's most interesting about this female competition is that some of it is completely imaginary. Maybe even most of it. It's in our heads. Women see what other women do and turn it into an attack on their own performance. We shouldn't. It isn't.

We hear one mother say that she makes her own baby food and we doubt ourselves if we don't. We may even make a passive aggressive remark about how nice it must be to have that kind of time.

But, mama, what one woman does isn't about you or me.

More than likely the mother who posts photos on Facebook of the afternoon she spent making homemade play dough with her child was not thinking "You know, I'm going to dedicate hours to this messy task so I can make others feel bad about the fact that they didn't do this. I am clearly the superior mom". No, the odds are far better that she did it because her kids would enjoy it. It was cold outside and she wanted an activity to keep her children from coloring on the walls. For the third time. With a permanent marker.

She shared it on Facebook because it's an easy way to keep her relatives and close friends apprised of how the kids are doing. You and I did not enter her decision-making at all.

The woman who feeds her kids sandwiches with bread she makes from scratch doesn't do it to show you up. Maybe she likes homemade bread better than store bought. Maybe she has a child with a food allergy. Maybe she just wanted to challenge herself to see if she could do it. Who cares? Good for her. Let's say "hey, that's cool" and move on.

To the mother whose Christmas shopping is complete by October, wow. You clearly have a gift for organization and planning that I do not. Maybe I will learn a trick or two. Or maybe I won't. But I'm still happy for you.

To the mother who sews her kids' Halloween costumes, now that's a talent! I can sew some straight lines but I'm fairly sure that your endeavor would result in a few bloody fingers for me. I wouldn't mind if you taught me how to stop breaking my needle. Really.

To the mother whose house is spotless despite having five kids under five, can I hang out there? While you babysit my kids? Is that a weird request?

To the mother who works a full day outside the home and somehow manages to have dinner ready at 6:00 for her family, I should be there at 5:45, right? I can bring a salad.

I believe most women do what they do without intending to make other mothers feel like less of a parent. We're all just doing our best. We'll excel in some areas and fall short in others.

Nobody said we're all supposed to be the best at everything. That's a ridiculous standard to set for yourself. You will fail. Period.

And if there are women who do things strictly so they can show off to you, by golly let them. Perhaps they do it because they have doubts about themselves.

I propose that we all do our part to stop the madness.

I am not in competition with you. I am going to assume that you do not live your life in competition with me. My focus is on me and my family. I can't even imagine how much energy it would take to be in constant fear that you'll do something amazing that I haven't done. You will. And I don't have any energy to spare. Coffee can only do so much.

I choose to celebrate with you. I choose to be your biggest cheerleader because I want you to do well. I am going to be inspired by you. That's what friends are for, right? And couldn't we all use more of those?