I looked up from my laptop to see my 7-year-old son, Whit, sitting on the edge of the low train table in our family room. One hand held a half-finished LEGO, and the other was held over his chest. He closed his eyes, bending his blonde head slightly down, clearly paying attention to what he was feeling.

I stared at him. Why did he suddenly think of this, now? The inner workings of Whit's mind and heart will always be a mystery to me. He is funny and random, with a memory so sturdy that the smallest details resurface, seemingly haphazardly, like flotsam in the stream of his mind. At the same time, though, he is occasionally overcome by waves of deep sentimentality and an awareness of loss that seems profound for his age. His company reminds me, daily, of the vast and essential unknowability of even those we love best.

I watched Whit perched on the edge of the train table, colorful LEGOs scattered like drifts of confetti all around him, holding his hand over his heart. He spoke again. "It feels amazing, Mummy."

Why yes, Whit. It is amazing.

The next morning I took him to his seven-year doctor's appointment. He sat on the paper-covered examination table in just his jeans, his white chest looking impossibly tiny and incomprehensibly grown-up at the same time. Whit watched Doctor Dan carefully, with some trepidation, as he examined him, and then winced as the cold stethoscope was pressed to his back. Doctor Dan asked him to turn his head this way and that. He kept listening, moving the stethoscope, listening more. A frown pulled at his mouth.

Time stretched uncomfortably. I glanced at Matt, my anxiety mounting. What was he hearing? What was he listening for? Whit looked over his shoulder at Doctor Dan, sensing, too, that this was taking longer than it should. "Whit, turn your head slowly back and forth." Dan's voice was stern, his face limned with concentration.

I chewed a nail as I watched, feeling my own heart skittering in my chest. Was Whit's comment last night some kind of harbinger, a prompt by the universe to appreciate the amazement of our hearts beating, of this most taken-for-granted and yet outrageous gift? I could feel my breath speeding up and I began to imagine awful scenarios. Something is terribly wrong. He needs open heart surgery. I should have paid attention last night, put down my computer, pressed my hand to his chest, noticed the extraordinary beauty of his ordinary heartbeat. I should have done that years ago.

"Okay," Dan cleared his throat and pulled the stethoscope out of his ears. "He's fine." I exhaled, but only part way. "But you can hear the whooshing of the blood in his aorta. It's something we see rarely in kids, and I kept asking him to turn his head to test if it was that or not. I wish my med student was here right now; this is rare and it's really interesting to hear."

"But it's really just normal, and not an issue?"

"Yes, really. I promise. It's just an odd little detail. His blood just flows close to the surface, your kid." I exhaled the rest of the way and helped Whit pull on his shirt.

A few minutes later, we walked back to the car. I thought of a quote I've always related to, by Alan Gurganus: "Her life stayed closer to the skin than most people's." I let go of Whit's hand and held my fingers against his back. Thump, thump, thump. His small heart rabbited against my hand. I could feel it through the thin cotton of his tee-shirt. It is amazing, mummy. Calamity is always so close. We walk the line between ordinary life and utter catastrophe every moment. The veil between this world and another is more gossamer than we let ourselves imagine. I shivered, as though something chilly but invisible had brushed by me. 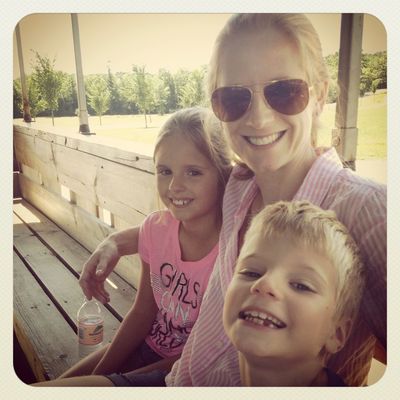 More:
AweParenting Parentsdoctor's visitparents-moms
Newsletter Sign Up
Raise the kind of person you'd like to know
Subscribe to our parenting newsletter.
Successfully Subscribed!
Realness delivered to your inbox