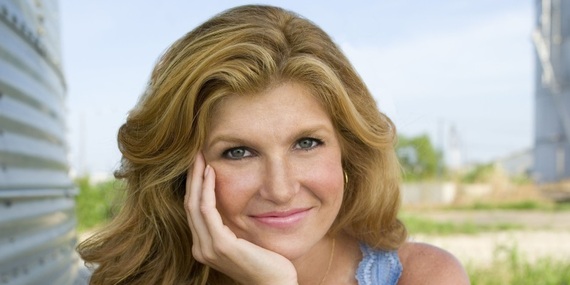 Moms are awesome. Where would we be without them? They nurture, they support, they comfort, and when needed, they can give you the metaphorical kick-in-the-pants when you need it most. And yes, they often do the same for the husbands as well.

In honor of Mother’s Day -- and specifically in honor of all mothers around the world -- we turn to one of the greats to heed some much needed advice for up-and-coming screenwriters. Sure, she’s a fictional mother and wife. However, most can see their own moms within this brilliantly and honestly conceived character.

Her name is Tami Taylor, from one of the most acclaimed television series of all time, Friday Night Lights. And you better watch out because she takes motherly advice seriously -- no holds barred.

As a screenwriter, you’re going to find rejection coming at you from all directions. It will be delivered silently, softly, and sometimes harshly. The worst that you can do is allow it to defeat you or bring you down. Embrace it. Learn from it. Because yes, either way, the sun’s going to come up the next morning and you can start fresh with the lessons that you’ve learned along the way.

“There is not a person in the world that could do this, except for you.”

Only you can tell the story that you want to tell. Only you can communicate what’s been in that creative mind of yours. You need to believe this. You need to have that mindset that you’re the only one that can tell this story in the end. No mentor can tell it for you. No fellow peer can give you all of the answers you need. No consultant, agent, manager, producer, or anyone can truly deliver your story. So go do it.

“There are always going to be some bad apples.”

Many disgruntled screenwriters believe that all of Hollywood is comprised of egotistical, self-serving, and clueless blowhards that only care about money. Nothing could be further from the truth. Like any business or industry, there are bad apples. There are ego-maniacs, greedy takers, and slimy backstabbers wherever you go. So many of the people within Hollywood are no different than you or your peers -- they love movies. They just happen to be in the unique position to be able to take part in making them. That might be you someday.

There’s always going to be bad apples, but don’t give them the power of shutting you down. Don’t let them take away your hopes and dreams. Suck it up.

“You never know what’s going on with somebody, sweetie. Can’t take it personally.#8221;

The entertainment industry can be a high stress environment for anyone. There are many hands in the cookie jar, as film and television are collaborative mediums. There are many different levels of the big totem pole and everyone is forced to answer to someone else in one way, shape, or form.

So when an agent, manager, or producer dismisses you at an event, on a phone call, through email, or even during a meeting, don’t write them off. You never know what’s going on. It’s out of your control and the best thing that you can do is be the best you that you can possibly be. Sometimes you just catch someone on a bad day -- or they’re a bad apple. The good ones will acknowledge this and get back to you when the time is right for them.

The advice that you receive from others will all too often be the very advice that they themselves should heed in the end. You may be told not to do this or that, only to see those very individuals, companies, or studios do that very thing. This happens in all walks of life, especially Hollywood. Learn to tell the difference between sincerity and rhetoric. Once you learn that, you’ll choose your mentors much better and you’ll learn what advice to take and what advice not to take.

“You’re a good person, and this is just the beginning.”

Screenwriters need to stay true to themselves despite all of the noise that comes along with this journey -- and there is a lot of noise. Focus as best you can with laser-sight focus on what you want to accomplish and realize that right now is only the beginning of your journey. There is plenty of time to get past the failures and closer to the success that you seek.

“I just want you to have faith in something. Something that can hold you when I’m not going to be able to hold you anymore.”

You need to have faith. Sure, action needs to come with faith in order to succeed but without faith, there is no hope. And without hope, this journey is going to be a dark one. You can’t just have expectations that you’re going to be a big screenwriting star. You need to have faith that wherever your journey ends, that’s where you are meant to be.

“What are these choices you’ve been making?”

This is where it gets real. Every screenwriter goes through an initial period of naivete. For some, it lasts longer than it should. For most, they get to a point where they realize that they’ve been making horrible choices in regards to their concept development, their writing, and their marketing.

Pay special attention to the choices that you’re making as a screenwriter. Are you choosing your concepts wisely before you start to write them? Are you taking into account not just the artistic side, but also the business side? Because remember, there is no show without the business? Are you writing on a regular basis with a schedule, or are you just winging it and writing when you feel like it?

Do your best as a screenwriter to get past that period of naivete and handle things with a more focused, realistic, and professional attitude and approach.

"I think you just keep doing what you're doing… take it one day at a time."

The life of a screenwriter is a grind. And no matter what you achieve within this career, that never changes. It’s part of the job, even if you’re a produced and represented screenwriter with a great resume.

Take it one day at a time. With each script, don’t be too obsessed with what you’ll do with it when you finally type THE END. Focus on the task at hand -- writing your opening scene, writing your first ten pages that hook the reader, writing the transition from opening to second act, getting from the second act to the third, keeping each and every page engaging, etc. Each of these steps should be handled one day at a time. You can’t worry about it all. Just keep writing. You’ll get there.

"There's no weakness in forgiveness."

Writers beat themselves up quite a bit. It may be a scene that you can’t crack, a character that you can’t figure out, a script that you can’t finish, a career that you can’t get going, etc. You chastise yourself. You try to make yourself believe that you’re a lousy writer. You begin to take that personal disdain and direct it towards others, be it agents, managers, producers, development executives, or Hollywood in general.

Forgive yourself. Take that weight off of your shoulders. Understand that all screenwriters have their good days, weeks, months, and years -- and their bad. Even the established screenwriters go through this self doubt. There’s no weakness in looking in the mirror and saying, “Hey, don’t worry about it. You’re a good writer. You know this is what you were meant to do.”

Forgive yourself and you’ll truly feel that weight lifted off of your shoulders. And the next thing you know, you’ll write something brilliant.

"I believe in you with every cell of my being."

Thanks mom. We know.

Happy Mother’s Day to all!