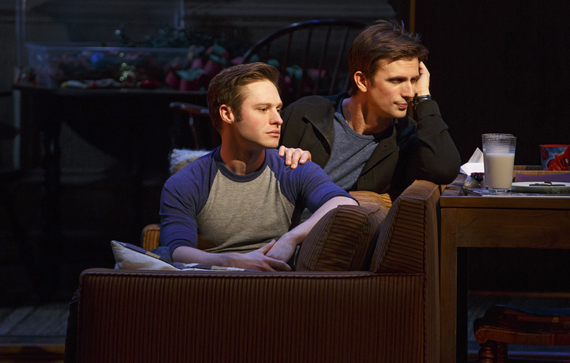 The Sardi's caricatures came to life on Monday night when New York's cultural elite gathered at the celebrated theater district restaurant for the opening of Terrence McNally's Mothers and Sons on Broadway.

The generally spacious, multi-level restaurant was jam-packed with everyone from Nathan Lane to Bernadette Peters, and everywhere you looked, you couldn't help but lock eyes with Victor Garber or rub shoulders (literally) with F. Murray Abraham. It seems like the countless famous faces on the walls, immortalized in cartoons for their time spent on stage, really do haunt the district fixture.

Upon walking into the, again, crowded party, the entrance bottleneck boasted the famed drawings of McNally and Tyne Daly, one of the play's stars at the front. Mothers and Sons marks McNally's 20th Broadway show, and it explores the relationship between Katharine (Daly), a mother who lost her son to AIDS 20 years ago, and her son's partner (Fred Weller), who has since remarried to a man 15 years his junior (Bobby Steggert) and has a child (Grayson Taylor). By putting four generations onstage, McNally is able to probe different levels of the dialogue and experience surrounding homosexuality.

"I love that it tracks the evolution of the gay experience in a 90-minute play," Steggert says, while practically being accosted by producers, fans and family members at the after party.

I'm so lucky to play someone who is of a generation where opportunity and health and family and marriage is his right, and I'm so inspired to represent that generation of gay men because the world has changed drastically for us, for me.

Steggert has also blogged about his own experience as a gay man for The Huffington Post. You can read his blog post here.

Weller, who found himself in a similarly popular position to Steggert at the event, feels similarly about the play. "It's a masterful play with extremely rich characters," says Weller, who is also approached many times by the crowd surrounding him. "I've never played a character quite like this who's got such a huge arc. He's a fundamentally good person. Isn't comfortable with confrontation and anger but he can't help himself eventually."